The Browns play their home games at FirstEnergy Stadium. This venue opened in 1999, and it is owned by the city of Cleveland. FirstEnergy Stadium sits on the shore of Lake Erie, and gives the Browns a home-field advantage each time that they take the field. Cleveland Browns games often feature freezing temperatures and loud fans, which opposing teams have a difficult time adjusting to on the fly.

Some of the greatest Browns players of all time include Otto Graham, Ernie Davis, Jim Brown, Lou Groza, and Don Fleming among many others.

After a disappointing 2019 season, quarterback Baker Mayfield, wide receiver Odell Beckham Jr. and defensive end Myles Garrett providing an instant impact on the field, the Cleveland Browns look to bounce back and put the AFC North on notice under new head coach Kevin Stefanski. Any NFL fan knows that the Cleveland Browns have a rich history of success. Cleveland Browns tickets have always been in demand, and with the progress the team is making, this is sure to hold true for many years to come. View the entire Cleveland Browns schedule for 2022 to buy tickets.
FirstEnergy Stadium - Cleveland - Football 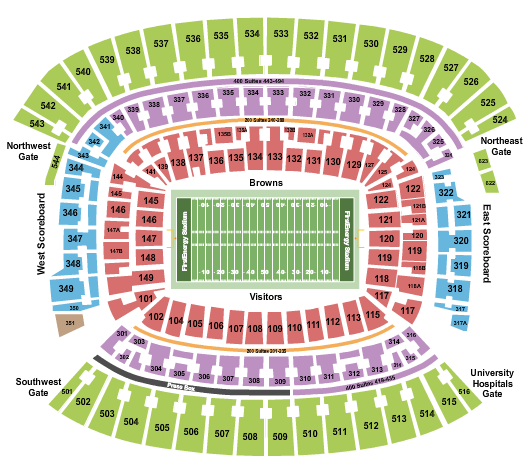