Looking for the latest updates on Post Malone? Read about the 2020 Runaway Tour now.

Post Malone has announced a spring tour to support his upcoming album Beerbongs & Bentleys. The album was supposed to be released on Dec 1, 2017, but fans are hopeful that it will drop before he hits the road on Apr 26 in Portland. Prior to the kick-off, Post is scheduled to perform at Coachella on Apr 13 & 14 in Indio, CA.

Of the upcoming album, Post Malone promised that it will be better than his last record, Stoney, which reached double-platinum status in 2015. Stoney reached #1 on the iTunes Overall Top Albums Chart and Top 10 on the  Billboard Top 200. In just a few months, the debut album has accumulated over 4 billion streams globally.

He’s off to a good start since the album features the number one triple-platinum smash-hit “Rockstar.” Atlanta Rapper 21 Savage, who accompanied him on "Rockstar", is also featured as a special guest on the tour along with Bay Area group SOB x RBE.

The Beerbongs and Bentleys Tour

The 28-city tour kicks off on April 26 in Portland, OR and wraps at the Shoreline Amphitheatre in Mountain View, CA on Jun 24. The tour features stops in cities across North America including Seattle, Nashville, Toronto, Atlanta, Austin, and more.

The Syracuse-born artist set the pace for alternative 21st-century Hip-Hop after the release of his debut single, “White Iverson” in 2015. After signing with Republic Records, Malone released “Congratulations,” which reached number eight on the Billboard Hot 100. The song was Malone's first Hot 100 Top 10 entry and would go on to become 6x platinum.

Post Malone completed the “longest climb ever to #1 on the Top R&B/Hip-Hop Albums Chart” in history, breaking the previous record set in 1989. Stoney topped the chart in its 51st week of release and was named “the #3 Overall Streaming Album of 2017”. 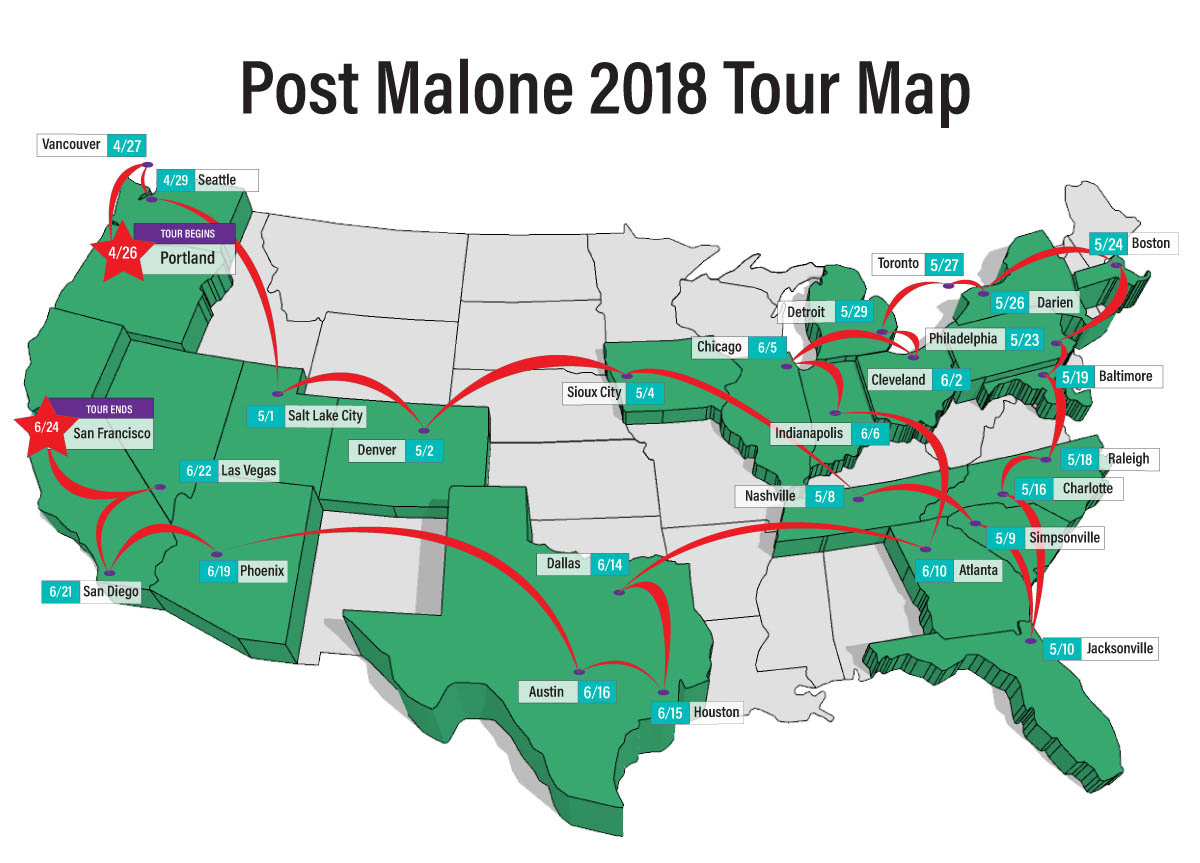 Where can I see the Post Malone “Beerbongs & Bentleys” Tour near me?