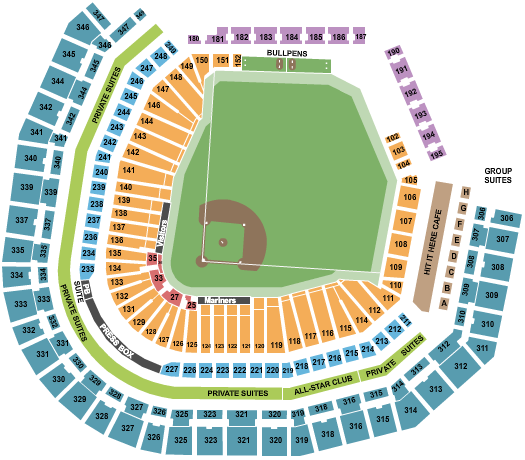 With sweeping views over downtown Seattle and Puget Sound, T-Mobile Park is the picturesque home of the MLB’s Seattle Mariners. The field opened in 1999 with the Mariners playing against the San Diego Padres. It’s hosted a number of sports and entertainment events since opening, including all Mariners home games, college baseball tournaments, the 2001 MLB All-Star Game, WrestleMania XIX and concerts.

T-Mobile Park is known for its retractable roof, which is not completely climate-controlled—it serves more like an “umbrella” protecting the stands and field from rain. The five-level venue offers a wide array of food and beverage options, and fans can even order food delivered to their seats from their phones. Tours of the facility are offered year-round, giving fans a glimpse of areas including the press box, owners’ suite, dugouts and all-star club. There are 2,000 parking spaces onsite, and parking lots open three hours before games and events.

Doors open two hours prior to events, and re-entry is permitted as long as visitors have their tickets scanned by a gate host at an entrance gate. Visitors may bring in small bags as well as personal cameras, although videotaping any game action is prohibited. Outside food is permitted as long as it’s properly wrapped, bagged or inside a container. Outside beverages and water are not allowed inside the stadium.

Q: What time do doors open at T-Mobile Park?

A: Doors typically open anywhere between 90 minutes to 2 hours prior to showtime at T-Mobile Park. Be sure to check the listing on your ticket as showtimes will vary.


Q: Who plays at T-Mobile Park?

A: The Seattle Mariners are the home team at the T-Mobile Park.