Fans are greeted by the phrase “Rounding third and heading for home” displayed atop the building, which was the signature sign-off of radio broadcaster Joe Nuxhall, who was also known as the youngest player ever to appear in a major league game. The three-story ballpark has a seating capacity of 42,271, and fans are provided with sweeping views of the venue. The second deck of the ballpark is where you’ll find the club seats, luxury suites and the press box. Great American Ball Park boasts high-definition video scoreboards, video cameras and production equipment, and a renovated control room. Aside from watching a game, fans can have a private party at the Riverboat Deck, discover more about the Reds history at the Cincinnati Reds Hall of Fame and Museum, visit the rose garden symbolizing Pete Rose's record-breaking 4,192nd hit, shop at the Reds Team Shop, and enjoy unlimited food and beverage choices in its 28 concession stands. You may take a tour of the facility during non-game days and game days, except on daytime game days.

Looking forward to watching a Reds game? Knowing the basic policies of the Great American Ball Park ensures that you will have a wonderful time watching a game. Fans are permitted to bring in bags, backpacks, soft-sided coolers, and purses with dimensions that do not exceed 16" x 16" x 8". Cameras and video equipment are allowed, as long as game action is not recorded. You may bring in food or snacks, soft drinks and water, provided they’re in clear plastic bottles. You may only re-enter the ballpark through one of the two designated gates for re-entry.
Great American Ball Park - Baseball 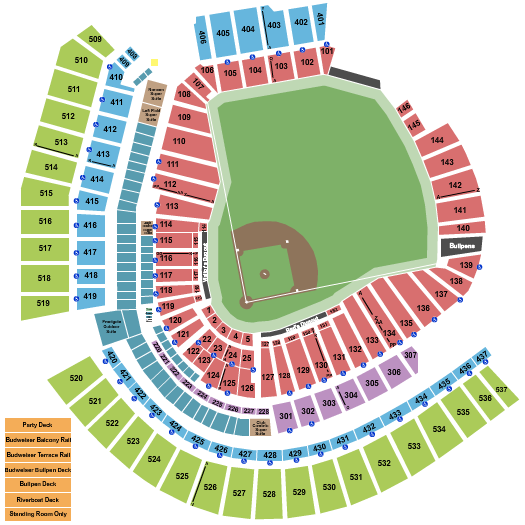 A: Doors typically open anywhere between 90 minutes to 2 hours prior to showtime at Great American Ball Park. Be sure to check the listing on your ticket as showtimes will vary.

A: The Cincinnati Reds are the home team at the Great American Ball Park.