The arena is known for its premium seating. There are 1,000 courtside seats available, including 27 suites, 32 club suites, four party suites and 80 club boxes. Concessions run the gamut from burritos and beer to Hawaiian shaved ice and pizza. For the truly hungry fan, the park's Bottomless Menu offers unlimited servings of soda and popcorn. Tours are available for groups of 10 or more on weekdays between 9 am and 4 pm. Smaller groups can be added to existing tours.

The arena sits right in downtown Memphis, close to an array of hotels including the famous Peabody Hotel, known for keeping ducks in the lobby. Historic Beale Street runs over a mile to the Mississippi, and it's the heart of the city's music scene. The iconic avenue is home to dozens of blues clubs, barbecue restaurants and other attractions.
FedExForum - Basketball

See FedExForum - Basketball events that use this seating chart configuration 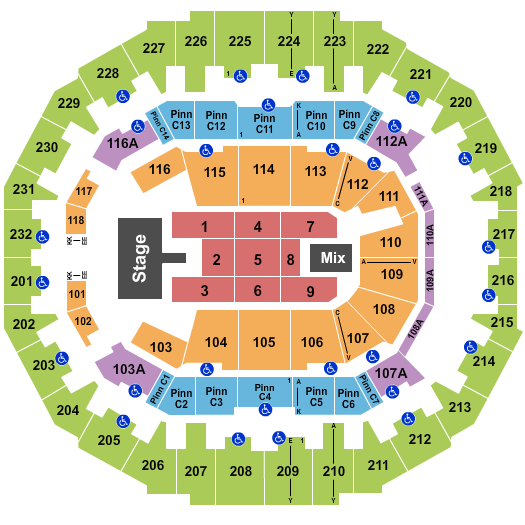 See FedExForum - Pentatonix 2 events that use this seating chart configuration

See FedExForum - WWE events that use this seating chart configuration

See FedExForum - Yo Gotti events that use this seating chart configuration

Q: What time do doors open at FedExForum?

A: Doors typically open anywhere between 90 minutes to 2 hours prior to showtime at FedExForum. Be sure to check the listing on your ticket as showtimes will vary.


Q: Who plays at FedExForum?

A: The Memphis Grizzlies are the home team at the FedExForum.