These 10 Cities Are Crawling With Cubs Fans 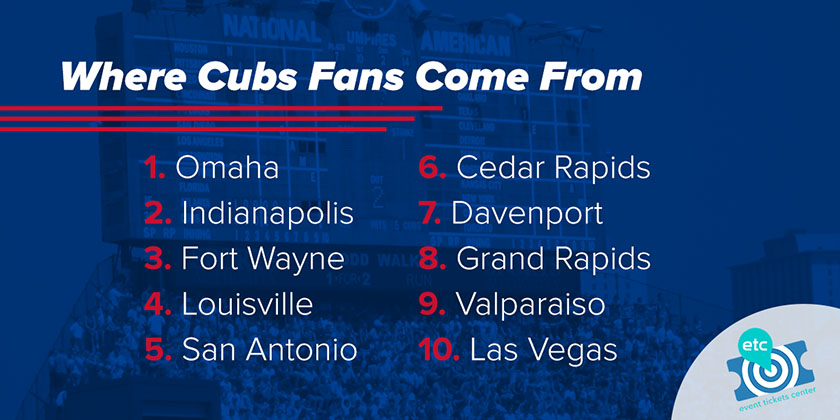 This is part two of our series examining cities across America with the most fans who buy tickets to Wrigley Field. For part one, which looked at cities with major league teams, read here.
The Chicago Cubs aren't just popular in Chicago and other cities with Major League Baseball teams. They're popular everywhere. So popular that after Game 7, Cubs World Series gear broke the single-month record for most championship apparel sold...in only 16 hours.

But which cities have the most fans buying tickets to see the Cubs at Wrigley Field? We studied the data from 2016 to find out who has adopted the Cubs as their hometown team.

Omaha, Nebraska, took the top spot in 2016 with more fans buying tickets to Wrigley Field than any other market that doesn't have a big league team. Why is Omaha on top of the list? Consider: It's a relatively quick drive across Iowa on Interstate 80 and only a 90-minute flight. That makes it a perfect weekend vacation for Cubs fans.

After Omaha, most of the top 10 list has a decidedly Midwestern feel. Indianapolis, Fort Wayne and Louisville follow before the list jumps south to San Antonio, which boasts a sizeable—if not surprising—number of Cubs fans for a city in southern Texas.

After San Antonio, the list comes back to the Midwest. Cedar Rapids and Davenport represent Iowa, Grand Rapids speaks for western Michigan and Valparaiso joins Indy and Fort Wayne from Indiana. Coming in at number 10 on the list: Las Vegas, the boyhood home of Kris Bryant. One can only wonder how many of those Cubs fans placed a wager on their team to end the curse last season.

Cubs fans outside the Midwest

Beyond the Midwest, the national reach of Cubs fandom is even more apparent. Cities as far apart as Charlotte, Daytona Beach, Portland (OR), Tucson, Jacksonville, Orlando and Albuquerque all land in the top 30 cities based on the number of fans in each city buying tickets to see the Cubs at Wrigley Field.

Iowa boasts two cities in the top 10 and seven in the top 25. The biggest pocket of Cubs fans is in eastern Iowa: Dubuque, Bettendorf and Iowa City all made the top 25, as did Des Moines. On the western edge, Sioux City and Council Bluffs join with Omaha to form a triangle of Cubs fandom.

What accounts for so many Iowans being loyal to a team from Chicago? After all, they have the Twins to the north, and the Royals and Cardinals to the south. The Cubs' AAA affiliate, known as the Iowa Cubs, play in Des Moines. World Series stars like Kris Bryant, Jake Arrieta, Anthony Rizzo and Kyle Schwarber all came through Iowa on their way to Chicago. But many people point to WGN as the reason. The Cubs may not have always been the closest and most successful team, but thanks to being the only team on TV every afternoon during the summer, they became Iowa’s home team.

Whether it's the Midwest, the west coast or the tip of Florida, our look into what cities buy the most Cubs tickets shows that no matter where you live, you aren't far from the nearest Cubs fan.
Tickets By Category