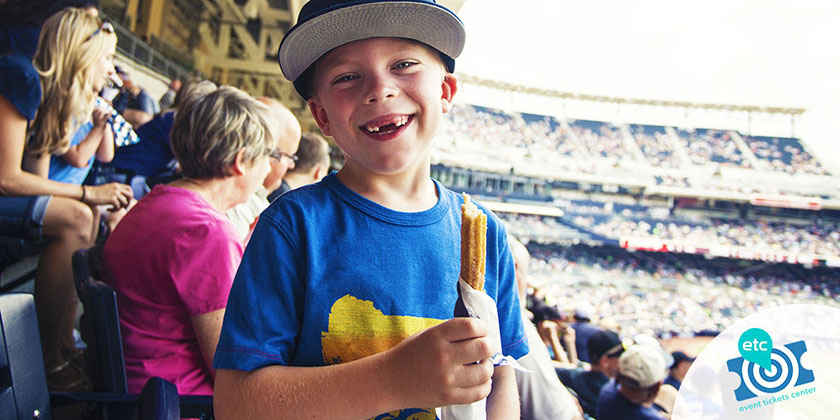 Taking your son or daughter to their first Major League Baseball game is an experience every parent will cherish. Being part of the tradition that passes the game down from one generation to the next is special, and you want to make it as perfect as possible. We’re here to help. The biggest decision is where to sit. Get as close to the field as possible? Sit farther back where it’s a little more relaxed?

There’s a lot that goes into deciding where to sit, more than you might even realize. We talked to some parents to get their tips on what to think about when selecting tickets.

The top thing they identified for parents to consider: The weather. Nothing can put a damper on a child’s first game faster than baking in the hot sun or getting rained on. If you’re going to an indoor stadium like Tampa or one of the parks with a retractable roof, this is less of an issue.

If you’re headed to an open-air stadium, here are some things to keep in mind:

Aside from just the weather, here are things we recommend taking into account when looking for the best seats:

Sit by the right dugout. Sitting by the wrong dugout can disappoint a kid hoping to get an up-close look at their favorite players. We put together a guide to every stadium’s dugout location so you’ll know whether to sit on the first or the third base side.

Watch out for foul balls. One of the joys unique to baseball is the chance at catching a foul ball, or even a homerun. But along with the joy comes the need to be aware of what’s happening on the field. The closer you sit the more alert you’ll need to be. Keep in mind, too, that most teams now have extended netting to protect fans above the dugouts so you can sit close to the field without the potential of hard-hit line drives.

What else do you need to know about your kids’ first game? Here’s what experienced parents highlighted:

Plot your exit. When the kids want to leave, they want to leave. Note the stadium exit closest to your seat – and the rest rooms along the way – so that when the time comes you’ll know exactly where to go.

Plan your arrival. If your son or daughter is a big fan, consider going early for batting practice. Bring their ball gloves and sit in the outfield to see if you can snag a souvenir and a pretty cool story about catching a ball. Handy tip: Keep your smartphone handy with the team rosters. As players chase down balls in the outfield during BP, knowing their name is an advantage when they turn to toss a ball into the crowd.

Consider bringing your own food. It’s a well-kept secret that many major league stadiums actually allow you to bring your own snacks to the game. Same goes for unopened bottles of water (and water only). We encourage you first to check with the stadium to make sure it’s allowed, but at most ballparks it is. It can help avoid the long lines at concession stands, save you some money and make the ballpark a better experience.

There’s a prime time to hit the potty. Bathrooms are busiest between innings, so it can be a big boost if you hit them during the innings. Yeah, you might miss a half-inning of the game, but avoiding a chaotic bathroom experience can be worth it.

Remember: Night games go late. If you’re not sure if your crew can make it a full nine innings, or they have a bed time they have to hit, an afternoon game may be better.

It’s just as fun to walk around. Most modern ballparks have open concourses that let you see the action on the field while you roam the stadium. If they seem restless during the game, a stroll around the ballpark can help keep them interested and show them the field from a different perspective.

Take in the museums & entertainment. Yankee Stadium has the famous Monument Park (most recent addition: Derek Jeter) and SunTrust Park has Hope & Will’s Sandlot with baseball simulators, games and even a climbing tower. Fenway Park in Boston has Wally’s Clubhouse in its Champions Club, featuring face painting, Wii consoles, bean bag tosses and more. It’s open between the third and seventh innings, making it perfect for when the kids need a break.

Taking a child to their first baseball game is less about who wins and more about sharing an experience with the game you love. They’ll never remember the score or who wins, but they will remember the first time they set eyes on that beautiful green grass and the person who made it all possible.
Tickets By Category