Maxwell has announced he will be embarking on his massive ’50 Intimate Nights Live’ Tour this fall!

The Grammy-winning singer/songwriter will hit the road starting September 27 with a performance in Richmond, Virginia. From there, he will go on to play a slew of cities across the U.S. including Baltimore, Orlando, New Orleans, San Antonio, Los Angeles and Chicago, wrapping with a December 9 show in New York City.

News of the tour follows the release of his first new song since 2016 entitled “We Never Saw It Coming.” The track is accompanied by the short film, The Glass House.

Gerald Maxwell Rivera began composing music at the age of 17 after receiving a Casio keyboard from a friend. By 1991, he was performing regularly throughout the New York City club scene and had gained access to a recording studio where he began to record songs for a demo tape. The demo brought him local popularity, and over the course of the next two years, Maxwell wrote and recorded over three hundred songs, playing frequently at small venues in NYC continually growing his fanbase. After garnering a large and loyal following, he signed a recording contract with Columbia Records in 1994.

Maxwell released his debut album Maxwell’s Urban Hang Suite in 1996. The album was slow to obtain commercial success, and from August to October 1996 it experienced chart growth on both the Top R&B/Hip-Hop Albums and Billboard 200. It spent 78 weeks on the Billboard 200 and was later ranked as one of the year’s top-10 best albums by Time, Rolling Stone and USA Today. Maxwell’s Urban Hang Suite was nominated for a Grammy Award for Best R&B Album.

His second studio album, Embrya, dropped in early 1998 and received mixed reviews from critics. Despite the negative press, Embrya sold over one million copies and garnered Maxwell an all new alternative fanbase. The album was certified platinum in May 1999 and was nominated for a Grammy Award for Best R&B Album. His third album, Now, released in 2001, becoming his first ever number one album. It was his last release before quietly entering an almost seven-year hiatus from performing.

BLACKsummers’night was released in 2009 and served as the first part of his scheduled trilogy of albums. It received universal acclaim and debuted at the number one spot on the Billboard 200. The album produced the hit single “Pretty Wings,” which debuted at number one on the Billboard R&B/Hip-Hop Songs chart, remaining on the chart for 47 weeks. “Pretty Wings” earned a Grammy Award for Best Male R&B Vocal Performance, while the album itself garnered a total of six nominations that year.

Following two years of occasional performances and planning, Maxwell shared in an interview with Rolling Stone that he had been working on his fifth album, the second installment of his trilogy. blackSUMMERS’night was released in July 2016. He also released his first solo single in six years that year titled “Lake by the Ocean,” for which he won the Grammy Award for Best R&B Song.

Maxwell has been credited with helping to shape what has come to be known as the neo-soul movement, which rose to prominence in the late 1990s. Neo-soul describes a style of music that emerged from soul and contemporary R&B. 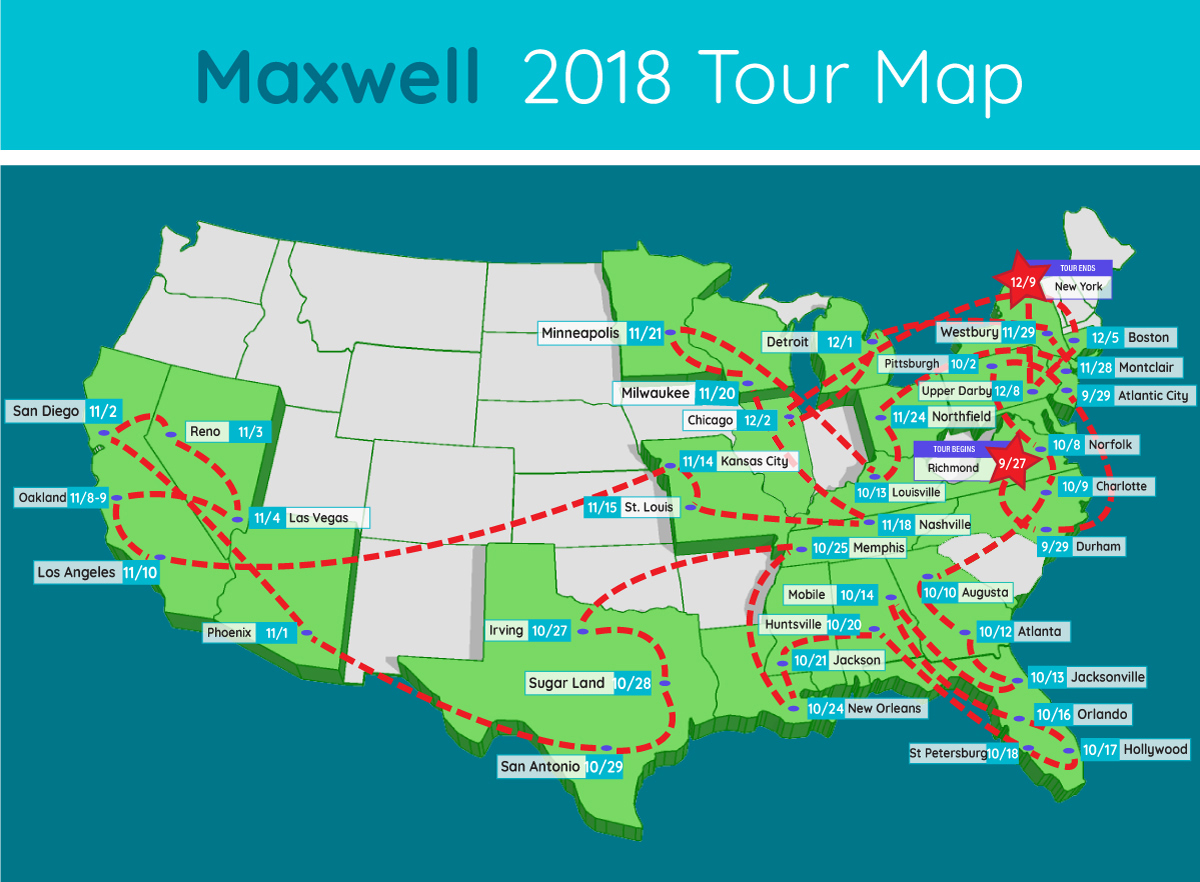 Where is Maxwell playing near me?