Nelly, TLC and Flo Rida are gearing up to hit the road for a joint amphitheatre tour, bringing the chart-topping hitmakers coast-to-coast this summer!

The 21-city trek launches July 23 in Tuscaloosa, AL before setting out to hit cities including Charlotte, Virginia Beach, Tinley Park, and Austin. A final show at the FivePoint Amphitheatre in Irvine, CA will wrap things up on August 31.

Get ready to dance the night away as Nelly, T.L.C. and Flo Rida deliver hit after hit on a stage near you this summer!

Hip-hop crossover artist Nelly rose to fame in the early 2000s with a pop-rap approach that set him apart from the rest of his peers. His singalong vocal style brought overnight success to the rising star, who released his solo debut album Country Grammar in 2000. The album skyrocketed to the top of the charts, debuting at the number three spot and yielding four Top 40 singles, setting the tone for what would be a long and wildly successful career. Nellyville followed in 2002, bringing Nelly to the top of the charts once again on the strength of massive hit singles “Hot in Herre,” and “Dilemma" (feat. Kelly Rowland). The Grammy Award-winning rapper has since released five additional albums, all of which have debuted to chart-topping success and featured all-star collaborations with the likes of Justin Timberlake, T-Pain, Fergie, Akon, Jermaine Dupri, and many more. Nelly is considered one of the best hip-hop acts of the new millennium, with the RIAA ranking him as the fourth best-selling rap artist in US music history.

Considered one of the best-selling female music groups of all time, TLC dominated the music charts throughout the 1990s and into the early 2000s with their winning combo of pop/R&B. Made up of members Tionne “T-Boz” Watkins, Lisa “Left Eye” Lopes, and Rozonda “Chilli” Thomas, TLC rose to fame with their playful attitude and catchy hooks, appealing to both pop and R&B audiences equally. The group released their record-breaking sophomore album CrazySexyCool in 1994, debuting at the number three spot on the Billboard 200 and producing massive hit singles “Creep” and “Waterfalls.” CrazySexyCool spent over two years on the Billboard 200 chart and earned an 11-times platinum certification from the RIAA, making them the first girl group in history to be awarded a diamond certification.

TLC would go on to record two more albums with their original lineup including the critically acclaimed FanMail in 1999 before tragedy struck in April 2002, when Lopes was killed in a car accident. 3D, released in November 2002, included Lopes on two tracks, with the rest of the album serving as a eulogy while Watkins and Thomas mourned the devastating loss. With Lopes considered irreplaceable, the two continued TLC as a duo, sporadically performing and recording together into the late 2010s. TLC is the second best-selling girl group in the world (behind only the Spice Girls), with 65 million records sold across the globe. The group has earned four Grammy Awards, five MTV Video Music Awards, and five Soul Train Music Awards over the course of their career.

Who Is Flo Rida?

Feel-good hip-hop artist and party rapper Flo Rida emerged in the late 2000s, launching to stardom with the release of his breakout single “Low” in 2008. The track, which served as the lead single off his debut album Mail on Sunday, spent 10 weeks at the number one spot on the Billboard 100, breaking the record for digital download sales at the time of its release. The rising star followed up his breakthrough success with the release of R.O.O.T.S. (Route of Overcoming the Struggle) one year later, introducing the world to soon-to-be chart-topping sensation Kesha on the hit single, “Right Round.” Flo Rida’s subsequent albums, 2010’s Only One Flo (Part 1) and 2012’s Wild Ones, both charted on the Billboard 200, keeping his name and music at the forefront of pop music. He has sold over 80 million records across the globe, making him one of the best-selling artists in the world. 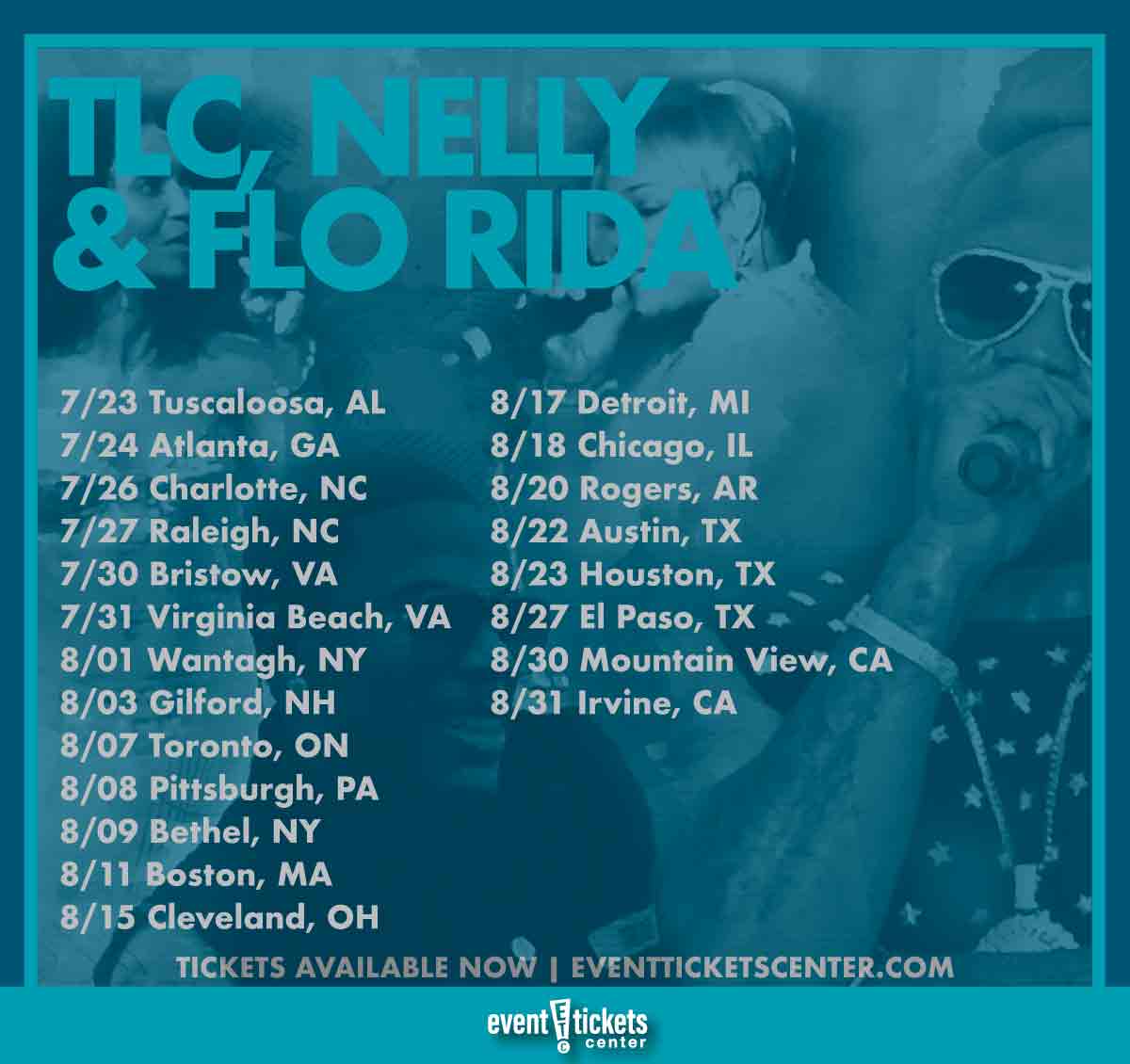 Where are Nelly, TLC and Flo Rida playing near me?