American rock bands Coheed and Cambria and Taking Back Sunday are teaming up for a 28-city summer amphitheater tour that kicks off on Friday, Jul 6 in Miami, FL with stops in Atlanta, Nashville, Boston, Philadelphia, Brooklyn, Chicago, Cleveland, Austin, Denver, Las Vegas, and more. The summer trek wraps at Comerica Theatre in Phoenix, Arizona on Sunday, Aug 12.

The Story So Far, a Northern California band, will be the opener on all dates.

Who are Coheed and Cambria?

Coheed and Cambria 's last album The Color Before The Sun was released in 2015 as the band's first "non-concept" effort over the span of its 15-year career. The album focused on frontman Claudio Sanchez's personal life, including the birth of his first child.

Most of Coheed and Cambria's past albums incorporate aspects of progressive rock, pop, heavy metal, and post-hardcore. They were based on a science fiction storyline called The Amory Wars, a series written by Claudio Sanchez, which has been transcribed into a series of comic books as well as a full-length novel.

Coheed and Cambria is frequently compared to progressive, operatic rock bands of the '70s, like Queen or Supertramp, due to their thrilling concept albums that take you on a journey of sounds.

The group's following has grown steadily every album, partly due to their exciting live shows that feature elaborate light shows.

Who is Taking Back Sunday?

Taking Back Sunday is excited to hit the road with longtime friends in Coheed and Cambria. "It's funny, we've been friends all of this time but we've never done a full tour together," comments drummer Mark O'Connell. "We ran into each other at some festivals last year and got to talking about it and here we are."

The band has released three studio albums with various past members.

Louder Now (2006) was the band's breakout mainstream album, notably because of the popularity of its lead single "MakeDamnSure". The album sold over 900,000 copies and peaked at No. 2 on the United States Billboard 200, surpassing the band's previous Billboard 200 peak in 2004 at No. 3 with Where You Want to Be.

Tidal Wave, the band's seventh full-length studio album, was released in 2016. The New York rock band pushed its creative limits to reach new fans as well as reconnect with those who have remained loyal.

"By the time most bands get to this point in their career they are pretty set in what they do but we were really mindful about approaching our musical ideas differently this time around and staying true to where the five of us are in our lives right now," frontman Adam Lazzara explains. "This album is truly an expression of what Taking Back Sunday is during this snapshot in time as opposed to what we think people expect from our band." 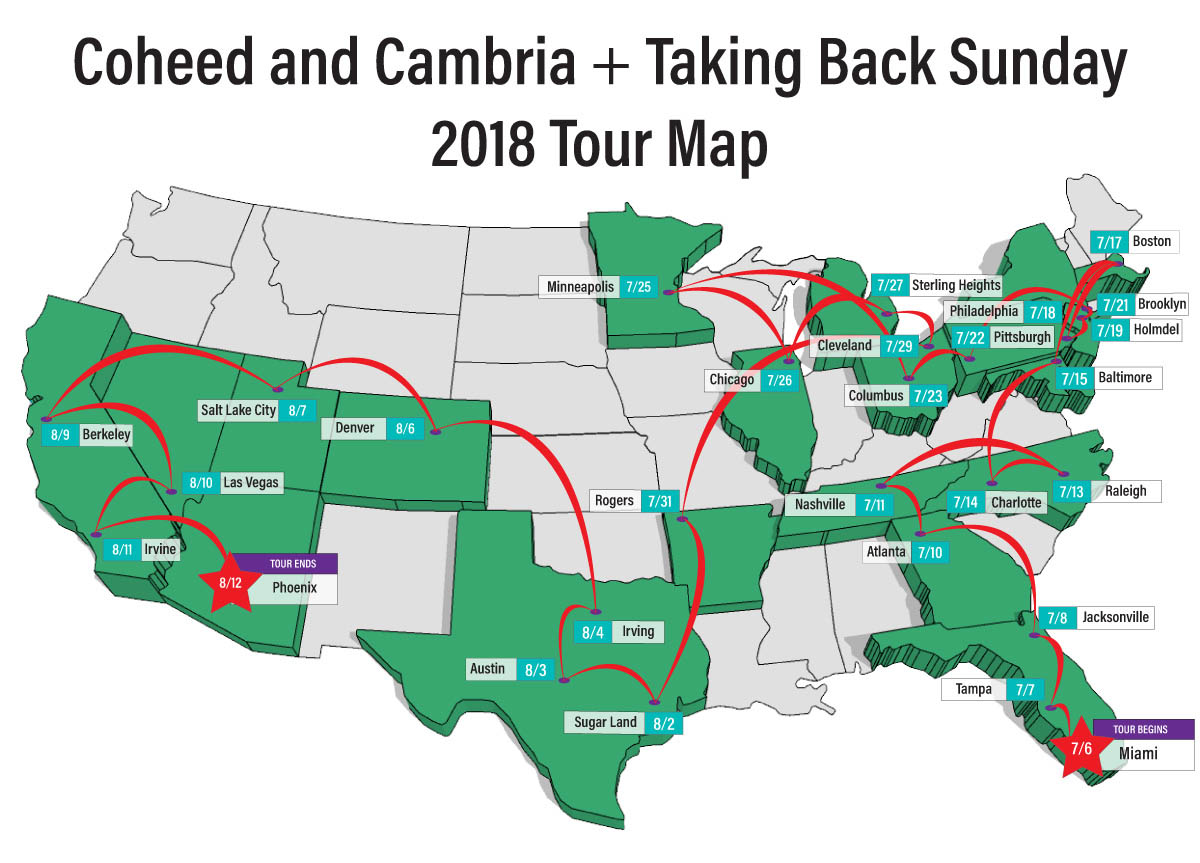 Where are Coheed & Cambria and Taking Back Sunday playing near me?