The 3-month trek gets underway June 5 in Clearwater, FL before heading out to hit cities like New Orleans, Austin, Nashville, Cleveland, New York City, Mashantucket, Denver, and Los Angeles. A final show at the Verizon Arena in North Little Rock, AR will wrap up the massive 62-date tour on September 1.

Check out a full list of dates and venues below! 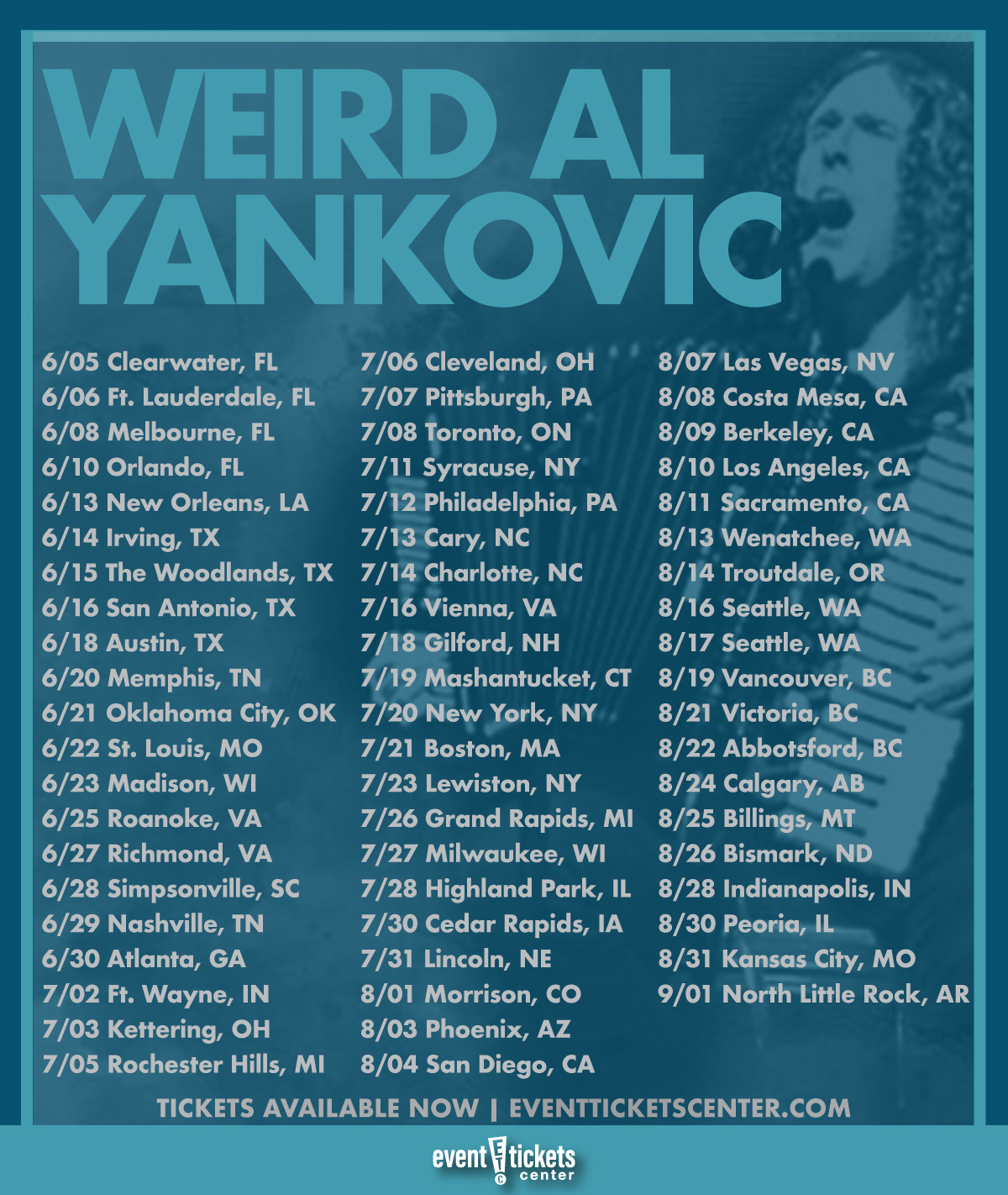 The undisputed king of song parodies is gearing up for another run of shows that will take him across the U.S. once again in 2019!

Fresh off the heels of his 77-date “Ridiculously Self-Indulgent, Ill-Advised Vanity Tour,” Weird Al Yankovic shared he is gearing up to hit the road again in the coming New Year for what he says will be his biggest tour ever.

“This last tour was a very bare-bones tour without any kind of costumes or props or anything,” Yankovic shared in a recent interview.

“It was as low-fi as we could possibly make it. And next year we're gonna go the whole other direction and we're gonna do our biggest-ever tour — every single show is going to be with a full orchestra. And it's called 'Strings Attached.'”

While no dates or venues have been shared for the upcoming run of shows, the ‘White and Nerdy” singer has hinted that ‘Strings Attached’ will launch sometime next summer.

News of the upcoming tour coincides with the unveiling of Yankovic’s star on the Hollywood Walk of Fame. The ceremony, which is set to take place on August 27, will feature speeches by LA radio DJ Dr. Demento, friend/actor Thomas Lennon, and of course, Yankovic himself.

Who is ‘Weird Al’ Yankovic?

Alfred “Weird Al” Yankovic has proudly carried the torch of musical humor over the course of his 40+ year career. The platinum-selling, accordion-playing king of parodies first emerged onto the scene as a teenager, when he handed DJ Dr. Demento a homemade tape of his original songs. Impressed by the clever wit of Yankovic’s comedic lyrics, Dr. Demento began playing his songs on the air across the LA area, officially launching his career.

Yankovic continues to break records as the undisputed master of his genre, with his latest release, 2014’s Mandatory Fun becoming the first-ever comedy album to debut at the number one spot of the Billboard 200. The album’s single “World Crimes” debuted in the Billboard Top 40, making him one of only four artists to have Top 40 singles in each of the last four decades (others include Michael Jackson, Madonna and U2).

Yankovic has taken home four Grammy Awards over the course of his career. In the years since the first airing of his song, he has recorded more than 150 parody and original tracks, selling more than 12 million albums across the globe.

Where is Weird Al Yankovic playing near me?