The Who have revealed US dates for their upcoming “Moving On! Tour,” bringing the legendary rockers to a stage near you in 2019!

The 29-date trek kicks off May 7 with a show in Grand Rapids, Michigan before setting out to hit a slew of cities including Nashville, Philadelphia, Boston, Tampa, Dallas, and Los Angeles. A final October 19 performance at the new T-Mobile Park in Seattle, Washington will close out the US leg before the guys head north of the border for a pair of shows in Canada.

“Moving On!” promises to deliver an experience unlike any other, presenting Roger Daltrey and Pete Townshend as fans have never seen them before – backed by a full orchestra.

“Be aware, Who fans!” Roger Daltrey shared in a statement. “Just because it’s The Who with an orchestra, in no way will it compromise the way Pete and I deliver our music. This will be full throttle Who with horns and bells on.”

The set list is still in the works. However, the band has hinted that a selection of songs from Tommy will make the cut in honor of the album’s 50th anniversary, as well as tunes from Quadrophenia and other hits from their expansive catalog.

Fans will be curious to see if the guys will sample any of the new material from their upcoming album as well. The album (which has yet to be named) will mark The Who’s first release of new songs since 2006’s Endless Wire. Townshend has reportedly already finished demos and is waiting on Daltrey to record vocals.

Who Are The Who?

Considered one of the most influential rock bands of the 20th century, The Who emerged as key figures of the British Invasion of the mid-1960s. The band broke down the barriers around conventional rock and roll, drawing on a never-ending wave of energy that produced furious guitar chords and vigorous basslines. The Who based their rhythms on Pete Townshend’s guitar, allowing for drummer Keith Moon and bassist John Entwistle to improvise over his foundation. It was this unique approach paired with Roger Daltrey’s powerhouse vocals that drove The Who to the top with a sound and style that was distinctly their own.

At their peak, The Who explored new musical territory lead largely by Townshend. Incorporating elements of pop art and conceptual extended musical pieces lead to anthems like “The Kids Are Alright” and “My Generation” and 1967’s rock opera Tommy, which was inducted to the Grammy Hall of Fame for its “historical, artistic, and signification value.” By the close of the 1960s, The Who ventured into a different direction, focusing on hard rock.

By the mid-1970s the group settled into their role as an arena rock band and continued along this path through various disbandments and reunions in the decades that followed. They continue to remain one of the most innovative and powerful bands of the 20th century and are revered for their many contributions to rock and roll, including the development of the Marshall stack, use of the synthesizer, developing the rock opera and much more. 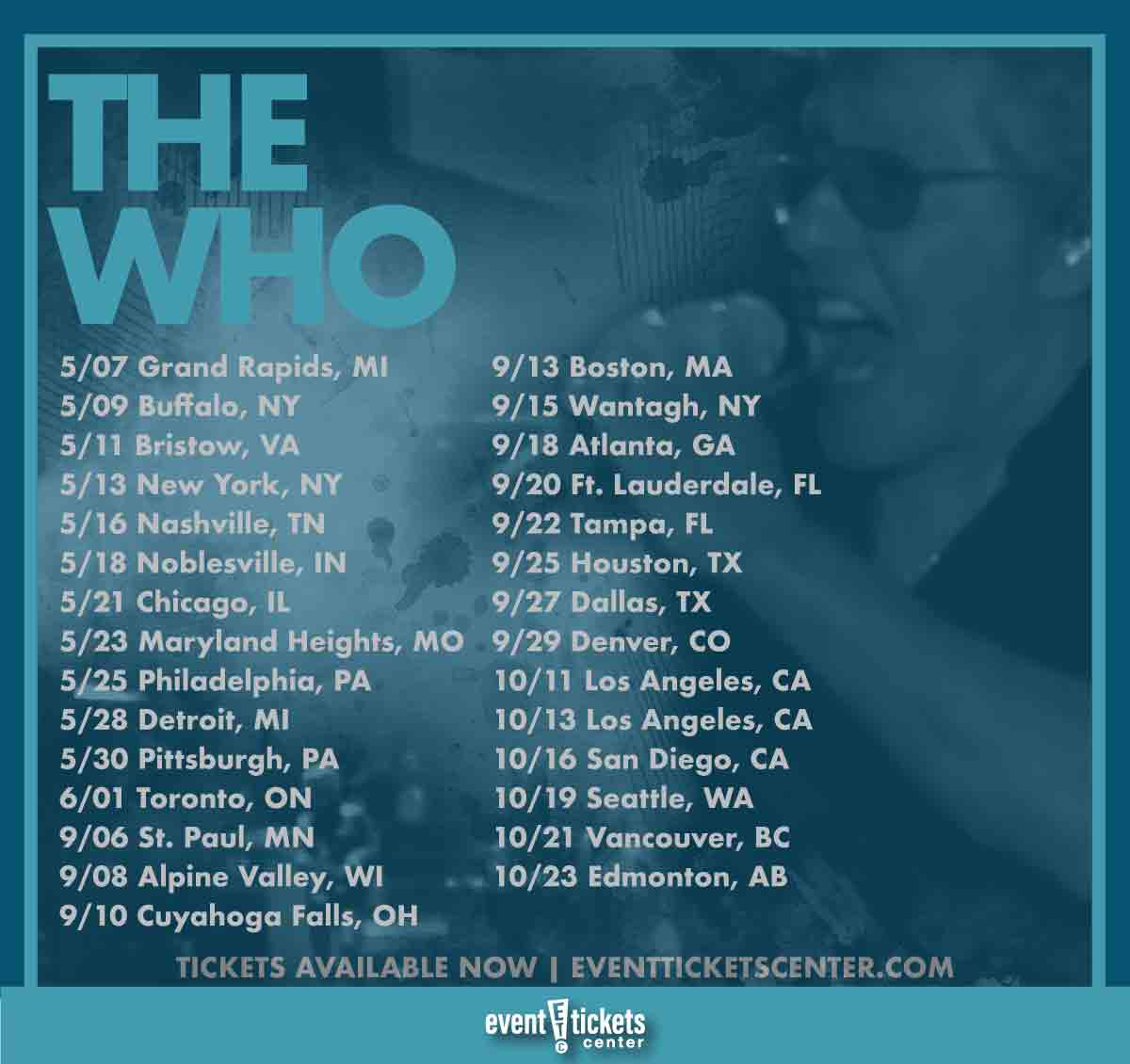 Where is The Who playing near me?