Switchfoot has finally ended their year-long hiatus with the announcement of an all-new upcoming tour, set to kick off early next year!

The 33-date trek gets underway February 14 with a show at The Orange Peel in Asheville, NC before setting out to hit a slew of cities including Nashville, Philly, Boston, Dallas, Orlando, and Minneapolis. A final show in Salt Lake City, UT will wrap things up on March 31.

The “Dare You To Move” rockers also confirmed the release of their upcoming studio album, Native Tongue, after keeping fans on their toes for over a month with mysterious posts to social media. A music video for the title track debuted just last week.

“My friends! We’re so excited to present this album to you. In a world driven by fear we wanted this album to be a love letter,” frontman John Foreman shared. “An invitation. Calling anyone with ears to hear back to a beauty and transcendence that does not rely on the fallible rhetoric of force.”

The San Diego natives announced in 2017 that after years of constant touring, the band, along with their crew, would be taking a year off the road to spend time at home with family. The break may have kept them off the road, but it certainly didn’t keep them out of the studio.

“These are polarizing times, where the loudest voice is often the voice of anger or fear,” Foreman shared in press release. “This album is an attempt to sing that hope into life. To bring a group of diverse songs under one common banner. Hatred is not your native language. Love is your Native Tongue.”

Native Tongue is due for release on January 18.

Switchfoot rose to fame as a Christian Rock band. Established in San Diego in 1996, their breakthrough would come in 2002 after four of their songs landed on the soundtrack for the hit movie A Walk to Remember. The inclusion led to widespread exposure, vastly expanding the band’s fanbase and leading to their major label debut one year later. The Beautiful Letdown dropped in 2003, bringing them mainstream on the strength of two wildly popular singles, “Meant to Live” and “Dare You To Move.” The Beautiful Letdown earned a double-platinum certification and went on to sell over 2.6 million copies, cementing their status as established rock artists.

Switchfoot has released a total of 11 studio albums over the course of their 20+ year career. They have won several prestigious awards, including one Grammy Award and 13 Dove Awards. Over the years, their genre has been classified as more alt rock than Christian Rock, with members of the band noting “we’re Christian by faith, not genre.”

"We've always been very open and honest about where the songs are coming from. For us, these songs are for everyone,” frontman Jon Foreman said. “Calling us 'Christian rock' tends to be a box that closes some people out and excludes them, and that's not what we're trying to do. Music has always opened my mind—and that's what we want."

Switchfoot’s musical style has been influenced by several artists including The Beatles, U2 and Keith Green. According to Foreman, the band’s name comes from a surfing term.

"We all love to surf and have been surfing all our lives so to us, the name made sense. To switch your feet means to take a new stance facing the opposite direction. It's about change and movement, a different way of approaching life and music." 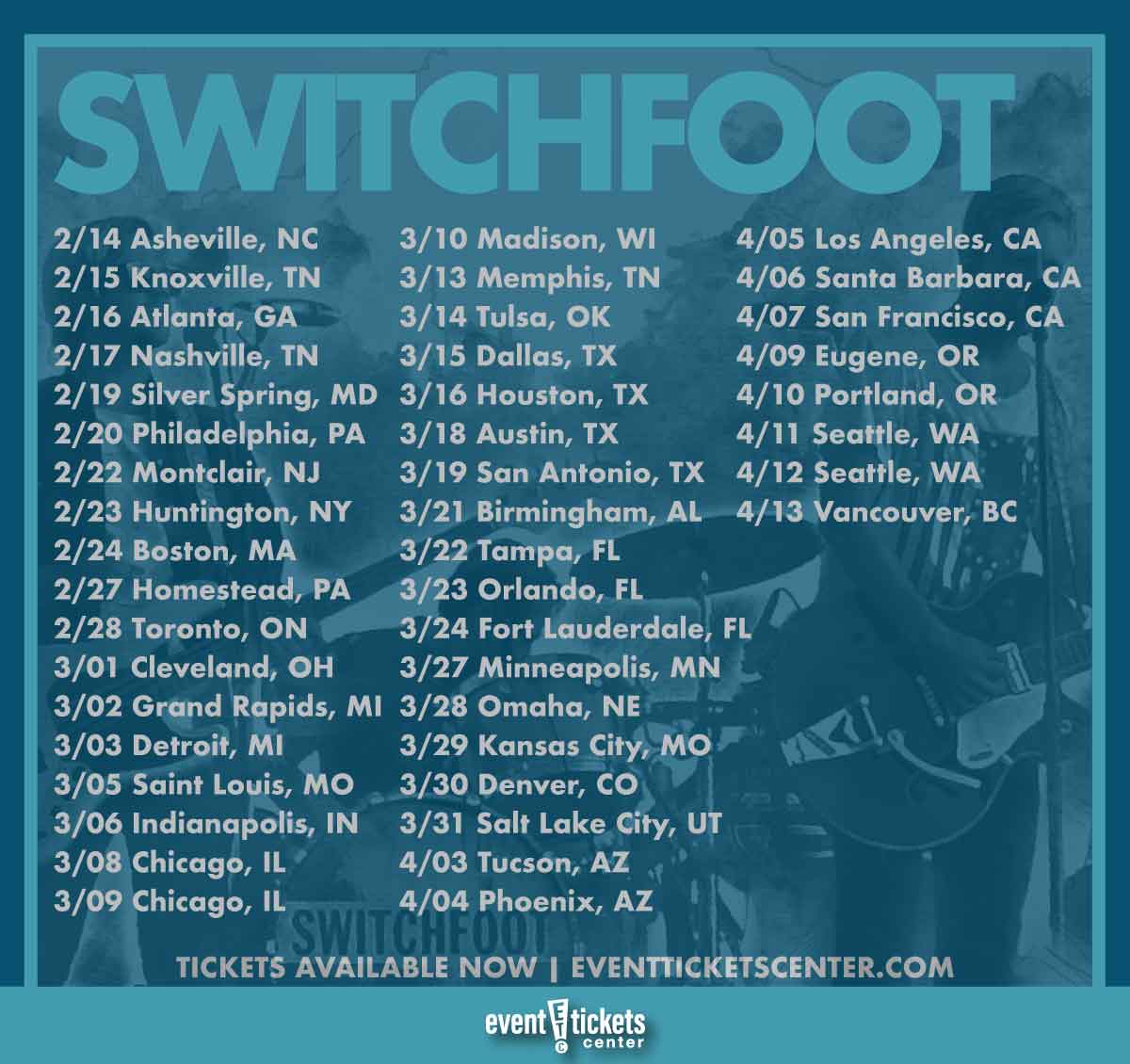 Where is Switchfoot playing near me?