Kansas will be extending their “Point of Know Return” anniversary tour into the new year, bringing the legendary rockers to an additional 29 cities across North America in 2019!

The second leg of the “Point of Know Return Tour” will kick off on March 8 in Des Moines, IA and will travel coast-to-coast, stopping in cities like Salina, San Diego, Denver, Los Angeles, and Portland. The tour will include six dates in Canada before returning stateside, wrapping things up on May 11 in Fort Wayne, IN.

The previously announced first leg of the tour launched September 28 and has already made stops in Atlanta, Nashville, Glenside, Pittsburgh, Milwaukee, and Chicago. With 52 dates altogether, the tour is a massive celebration of the 40th anniversary of Kansas’ landmark fifth studio album Point of Know Return (1977). The sextuple-platinum certified album spawned the smash hit and million-selling single “Dust in the Wind,” alongside fan favorites “Portrait (He Knew),” “Closet Chronicles,” and “Paradox.”

“From the album artwork to the song ‘Dust in the Wind,’ the album Point of Know Return is really ingrained in Rock N Roll history and even in popular culture,” Kansas guitarist and founding member Richard Williams stated. “For two years we played around 80 select shows performing the album Leftoverture in its entirety. We have been blown away by the positive fan response. Our hope is that fans will enjoy this ‘Point of Know Return Tour’ just as much, and hopefully even more! So far, that has been the case and we hope to continue it!”

A record-breaking event, the “Point of Know Return Tour” will see the prog-rock icons take to the stage for over two hours playing Point of Know Return in its entirety for the first time ever. Kansas will also perform classic hits, deep cuts, fan favorites, and some tracks not publicly played by the group in decades.

“I often joke that I cannot be in charge of putting together a set list, because there are too many songs that I really want to perform,” lead vocalist Ronnie Platt recently shared. “These shows, though, are about as close as it gets. Of course, there will be hits like ‘Carry On Wayward Son,’ but to know we will be performing songs that Kansas has not performed live for twenty or thirty years, that is just really exciting. It is going to be a lot of fun.”

Kansas formed in the early 1970s, boasting a harmonious blend of British prog-rock and American heartland. The band spent the early part of the decade touring extensively, struggling to gain recognition although growing a cult following with their unique blend of boogie and hard rock. In due time, their fanbase grew strong enough to earn the group a record deal, and their success took off from there.

Kansas catapulted to success with the release of their fourth studio album Leftoverture on the strength of its hit single, “Carry on Wayward Son” in 1976. The album sold over three million copies and reached the Top Five on the Billboard 200. Point of Know Return followed in 1977, bringing even more success and cementing Kansas’ status as established musicians and influential rock stars. Kansas has released a total of 15 full-length albums since their debut effort in 1974.

With a career that’s spanned nearly five decades, Kansas boasts an impressive track record with nine gold albums, three multi-platinum albums, one double platinum, one platinum, and a million-selling single with 1976’s smash hit “Dust In The Wind.” They appeared on the Billboard charts for over 200 weeks at the height of their career, while playing to sold-out arenas and stadiums around the world. 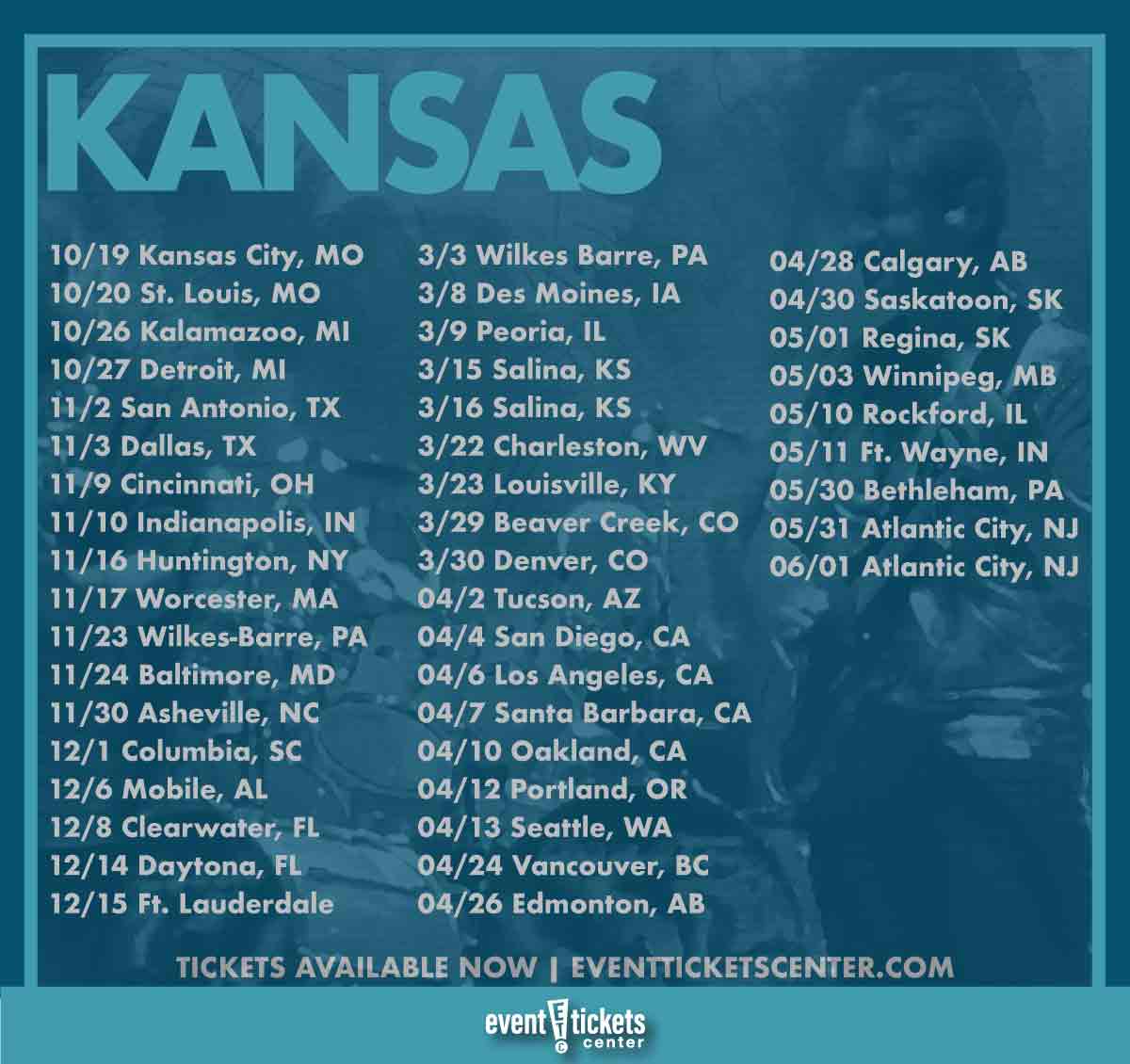 Where is Kansas playing near me?