Country music’s Kane Brown is gearing up to hit the road for an all-new headlining arena tour, bringing the artist to a city near you in 2019!

The “Live Forever Tour” is set to kick off January 10th with a performance in Duluth, GA. From there, he will make stops in cities like Huntsville, Orlando, Manchester, and Bloomington, wrapping up the 22-date trek with a final show in Cedar Park, TX on March 8.

"It's my biggest tour so far," the singer shared in a recent interview. "We've been in clubs, and now we'll be playing for 8,000 to 10,000 people. We're excited to work on our production and get it bigger and just get on the road and out of the clubs."

Brown will be joined by opening acts and fellow country artists Granger Smith with Raelynn, Danielle Bradbery, and Jimmie Smith on select dates.

Before he hits the road in January, Brown will launch another project – his second studio album, Experiment. According to Brown, the album will feature a sound that is true to its name.

"If I want to have a long career, instead of doing what other people want, I knew I had to do what I love, experiment with sounds and see what people gravitate towards," he said, describing the album as a blend of ‘90s country, R&B country, super rock and swamp.

The “Live Forever Tour” is named after a song off the upcoming album, which is due for release on November 9.

Who Is Kane Brown?

Tennessee native Kane Brown is a country singer-songwriter who initially was attracted to R&B music. Brown changed musical directions in high school after winning an 11th grade talent contest for his cover of Chris Young’s “Gettin’ You Home (The Black Dress Song),” opening up whole new world of possibilities for the young artist. He began posting videos of his covers online, quickly garnering a massive following of viewers and developing a loyal fanbase. Brown’s viewers were the driving force behind the success of his debut single “Don’t Go City On Me,” which went viral shortly after being uploaded in 2014. By 2015, he released his debut EP Closer, which charted within the top ten on the Billboard Country Albums chart. His debut full-length album, Kane Brown, followed in 2016, debuting at the number one spot on the country charts and hitting the number ten spot on the Billboard 200. Brown is known for his rich baritone vocals. He has said that his inspiration to sing was instilled in him as a young child by his mother, who used to sing him songs by Shania Twain and Sugarland instead of lullabies. 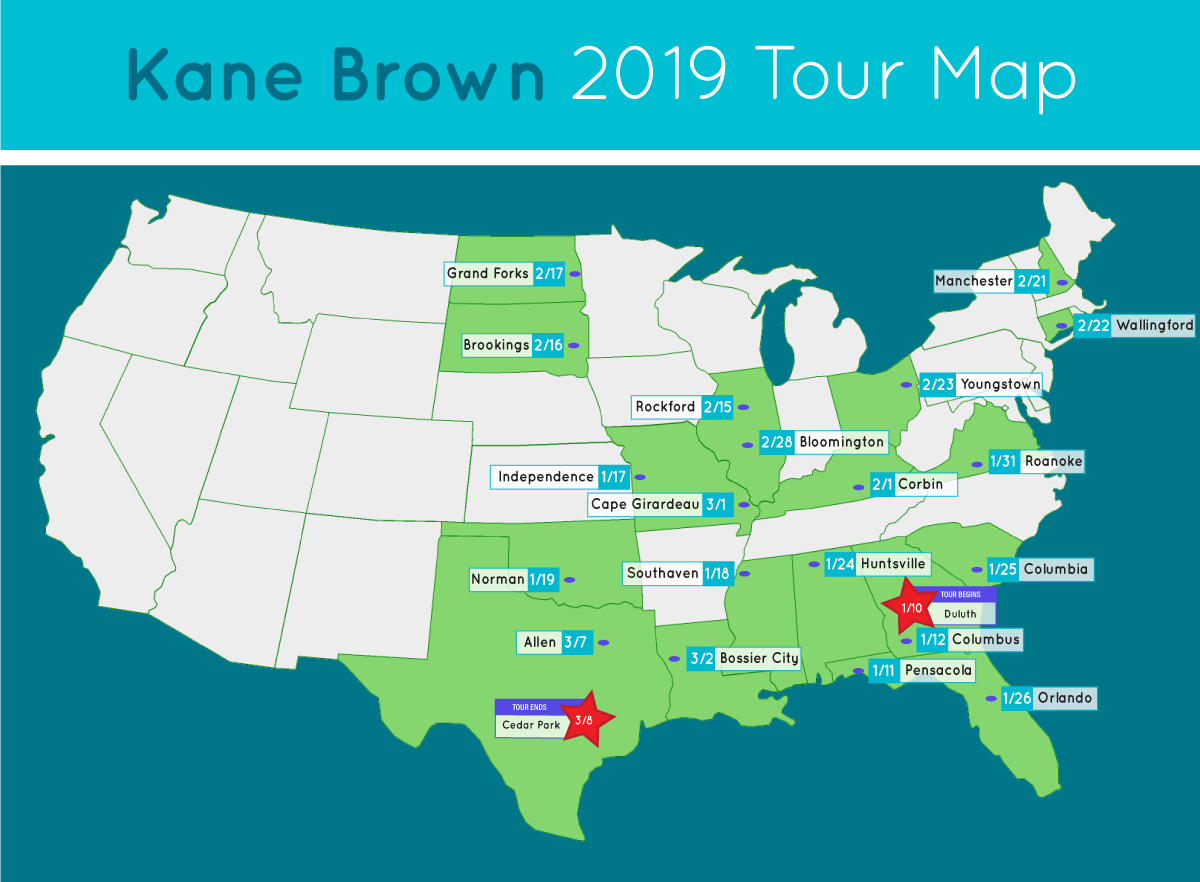 Where is Kane Brown playing near me?