R&B superstar John Legend has officially announced the upcoming release of his first-ever Christmas album along with a full list of US tour dates!

The 25-date trek gets underway November 15 with a show in Clearwater, FL. From there, Legend will hit the stage in cities including Atlanta, New York, Boston, Philadelphia, Chicago, Denver, and Portland. A final performance in San Diego, CA will wrap things up on December 30.

Legend’s forthcoming album, A Legendary Christmas, is due for release on October 26. The 14-track record will feature funk/soul legend Stevie Wonder playing the harmonica on the opening song “What Christmas Means to Me.” The album will also include guest vocals from jazz-bassist singer Esperanza Spalding on a version of “Have Yourself a Merry Little Christmas.”

Legend shared a full track listing in addition to his upcoming tour dates, which you can see below:

Who Is John Legend?

Grammy, Tony, Emmy and Academy Award-winning R&B singer, songwriter, and pianist John Legend first stepped onto the scene in the year 2000. Prior to the release of his debut album, Legend had collaborated with several established artists including the likes of Jay-Z, Alicia Keys, Kanye West, and Fort Minor. In 2004 he released his first album Get Lifted, officially putting Legend on the map as a skilled songwriter and impeccable vocalist. The album went double platinum and earned him three Grammy Awards. In 2007, he was inducted to the Songwriters Hall of Fame.

In the years since making his groundbreaking debut, Legend has released four additional studio albums, earning a total of 10 Grammy Awards. His work on the song “Glory” for the film Selma won him his first Academy Award. For his work as a producer for the Broadway show Jitney, Legend received a Tony Award, and for his portrayal of Jesus Christ in the NBC adaption of Jesus Christ Superstar he was awarded his first Emmy Award. Legend is the first black man to achieve the EGOT status (people who have won an Emmy, Grammy, Oscar and Tony Award). He is only one of 15 people to achieve this landmark status for his enormous contributions to the entertainment industry. 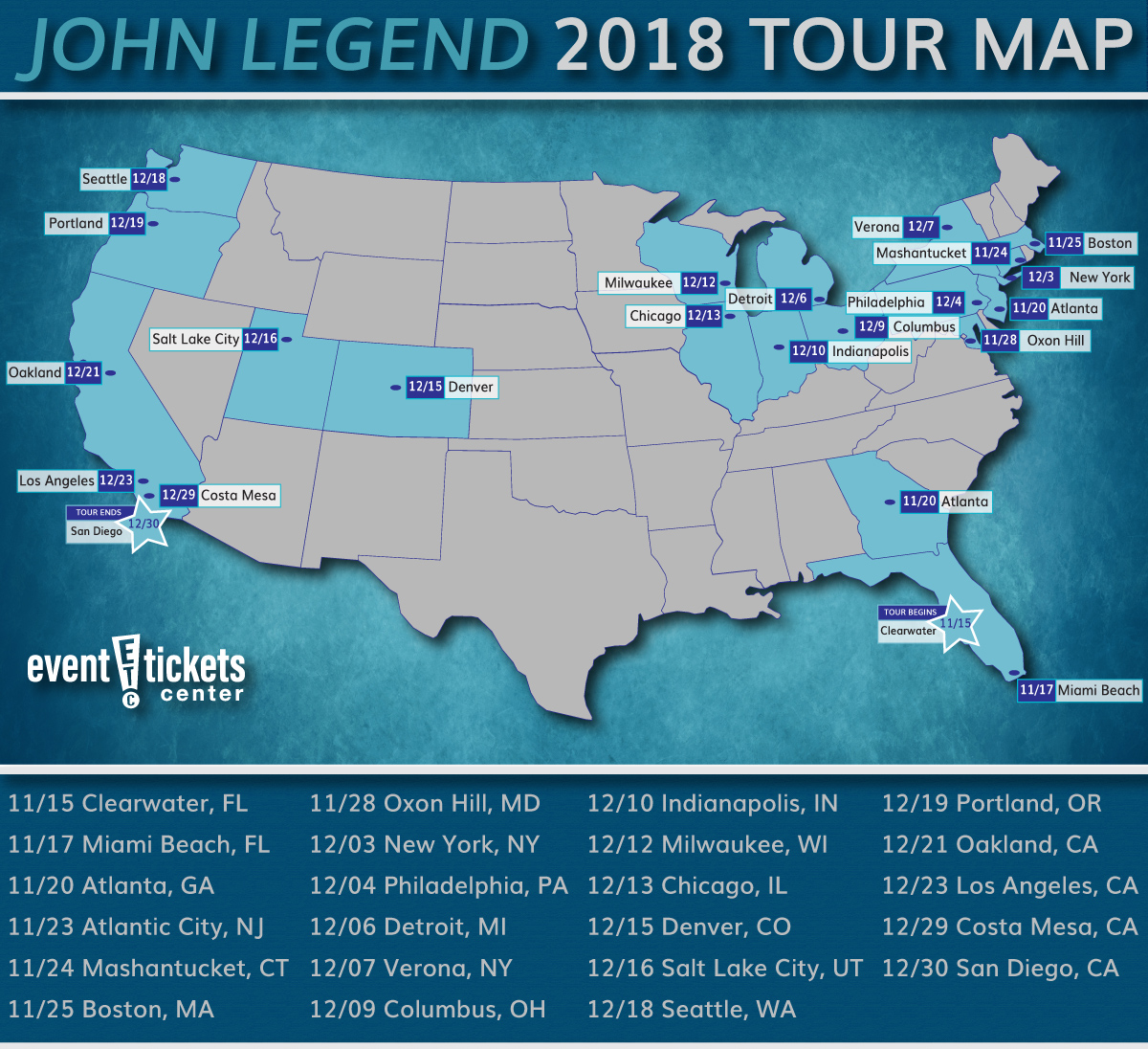 Where is John Legend playing near me?