The tour will be in honor of J. Cole’s latest album of the same name, which cracked multiple first-day streaming records upon its release. The LP broke Apple Music and Spotify’s records for most first-day U.S. album streams, beating fellow rapper Drake on both services.

J. Cole will be celebrating with fans across North America, kicking off the tour in Miami on August 9. From there, Cole and Thug will hit several cities including Houston, Sacramento, Denver, Chicago, and Philadelphia. The tour will wrap on October 10 in Boston’s TD Garden.

Amid his multi-city trek, Cole will launch his inaugural Dreamville Festival in his home state of North Carolina on Sept. 15. The one-day music festival has yet to unveil a lineup but promises to feature a variety of different acts that fans know and love.

As for the tour, fans can expect J. Cole to old favorites and hot new singles off his latest highly successful album. Young Thug will be supporting on most dates, pulling songs from a successful collection of mixtapes that have spanned his career.

Jermaine Lamarr Cole was born in Frankfurt, Germany, to an interracial couple serving in the U.S. Army. Cole's father abandoned the family, prompting his mother to relocate he and his brother to Fayetteville, North Carolina. Cole began rapping at 12 and was encouraged to see it as a future career when his mother purchased an ASR-X musical sampler as a Christmas gift three years later.

After graduating, Cole worked various part-time jobs, while working on his rap career. Things turned around when Cole became the first artist signed to Jay-Z’s label in early 2009. Seconds after Cole heard via text message that he'd been signed; the ecstatic rapper was pulled over by a cop and he was arrested.

Cole released his debut studio album, Cole World: The Sideline Story, in 2011 and it debuted at number one on the U.S. Billboard 200, becoming certified platinum. His next two releases, 2013's Born Sinner and 2014's 2014 Forest Hills Drive, also were both certified platinum in the U.S., earning positive reviews. The latter earned him his first Grammy Award nomination for Best Rap Album.

In 2016, Cole released his fourth studio album 4 Your Eyez Only. The album debuted at number one on the Billboard 200 chart and was certified platinum. His fifth album, KOD, was released in 2018 and made history on the Hot 100, making Cole the first act ever to debut three songs simultaneously in the top 10: "ATM" at number six, "Kevin's Heart" at number eight and "KOD" at number 10.

Who Is Young Thug?

Jeffery Lamar Williams, better known as Young Thug, was born in Atlanta as the tenth of eleven children. He grew up in the Jonesboro South projects, where rappers Waka Flocka Flame, 2 Chainz, and Ludacris also hailed from.

After releasing the first three installments of his mixtape series I Came from Nothing throughout 2011 and 2012, Young Thug caught the attention of fellow Atlanta-based rapper Gucci Mane, who went on to sign Young Thug to his label in 2013. Thug released his fourth mixtape, 1017 Thug to positive reviews from music critics for its original style. The mixtape was ranked on several year-end lists for 2013, including Pitchfork Albums of the Year, Complex’s 50 Best Albums of 2013, FACT’s Best Mixtape of 2013, Rolling Stone’s 10 Best Mixtapes of 2013, and The Guardian’s Five Best Mixtapes of 2013.

Young Thug cracked the mainstream with singles “Stoner” and “Danny Glover,” and appeared on songs with prominent rappers like T.I. and Rich Gang. He continued to release several mixtapes from 2015 to 2017, including the commercially successful I’m Up, Slime Season 3, Jeffrey, and Beautiful Thugger Girls. 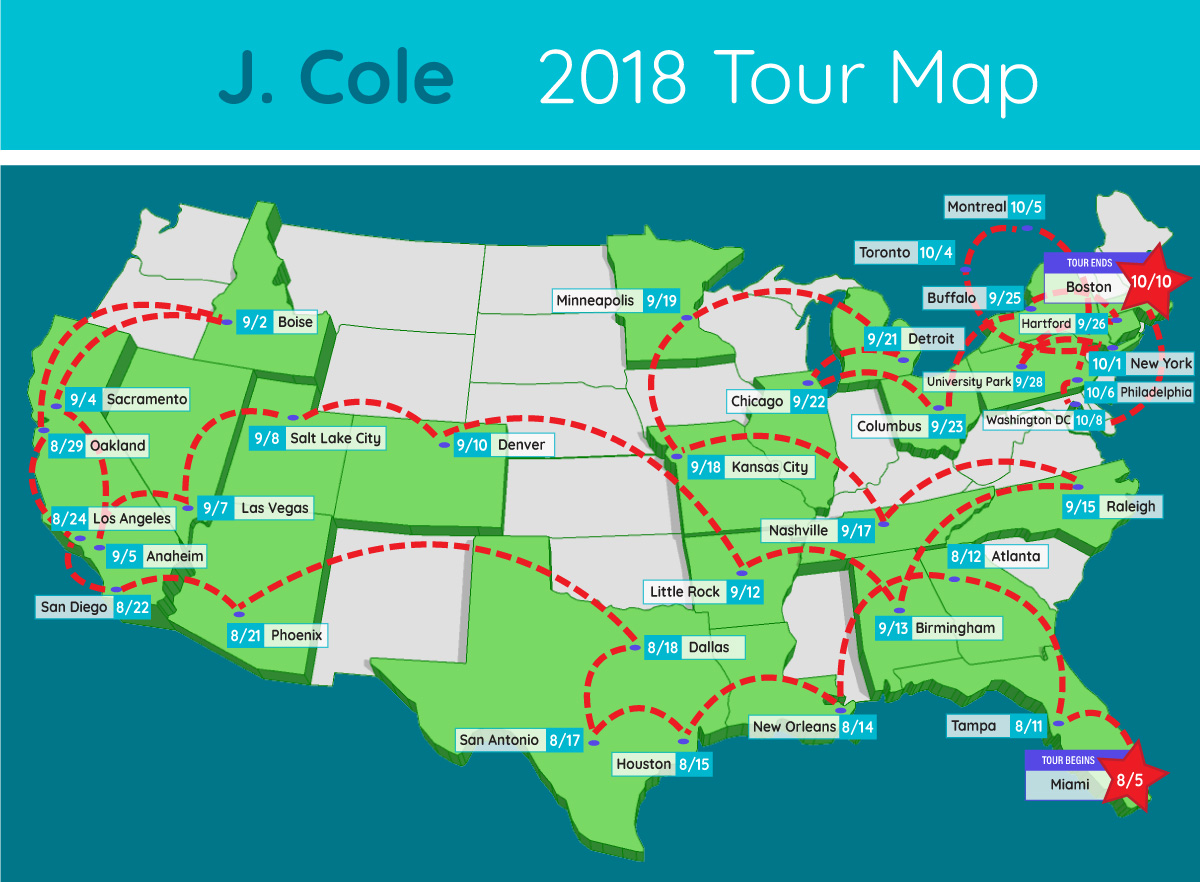 Where are J Cole and Young Thug playing near me?