Rock legend David Crosby announced he will be hitting the road with his Lighthouse Band this fall in support his upcoming album!

The five-week run will kick off on November 2 at Seattle’s Neptune Theater. Crosby will then travel coast-to-coast, hitting cities like San Diego, Madison, Kalamazoo, and Derry before wrapping the 22-date tour with a final performance in Port Chester, NY on December 8.

Crosby will be joined onstage by The Lighthouse Band, which includes Becca Stevens, Michael League of Snarky Puppy and Michelle Willis. The group collaborated with Crosby on his highly anticipated upcoming album, which is due for release this fall. More details about the album are expected to emerge in the coming weeks.

Adding to the excitement is the fact that Crosby will also be the subject of an upcoming documentary, which is still in the works. The yet-to-be-named film was announced in April and will focus Crosby’s life as a living rock icon. Produced by Cameron Crowe and directed by A.J. Eaton, it will be the first fully-authorized documentary on Crosby.

“David Crosby has been near the forefront of music and social change for the last four decades,” Crowe said in a statement when news of the documentary was announced. “Now 76, he’s forging a new path by seeking out younger musicians and trying to make a mark in a world now so different from the generation he came to define in the 60’s. It’s a raw and moving portrait, rough edges and all.”

Who Is David Crosby?

Folk rock pioneer David Crosby has been creating music, both as part of a band and as a solo artist, for over six decades. He initially stepped onto the scene as a founding member of The Byrds in 1964, remaining with the band through five albums before joining forces with Stephen Stills to form Crosby, Stills & Nash in 1968. Crosby’s aptitude for bringing societal issues to the forefront of his lyrics became a trademark of his music, creating anthems for social change during a turbulent time in American history. His lyrics in songs like “Almost Cut My Hair” and “Wooden Ships” have resonated with generations of people and has turned him into an emblem of 1960s counterculture. A two-time Rock and Roll Hall of Fame inductee, Crosby is a living music legend. His work with the Byrds and Crosby, Stills & Nash has sold over 35 million albums worldwide. At age 77, he remains at the top of the ranks in the world of folk rock, continuously creating music and contributing his voice to prevalent issues. 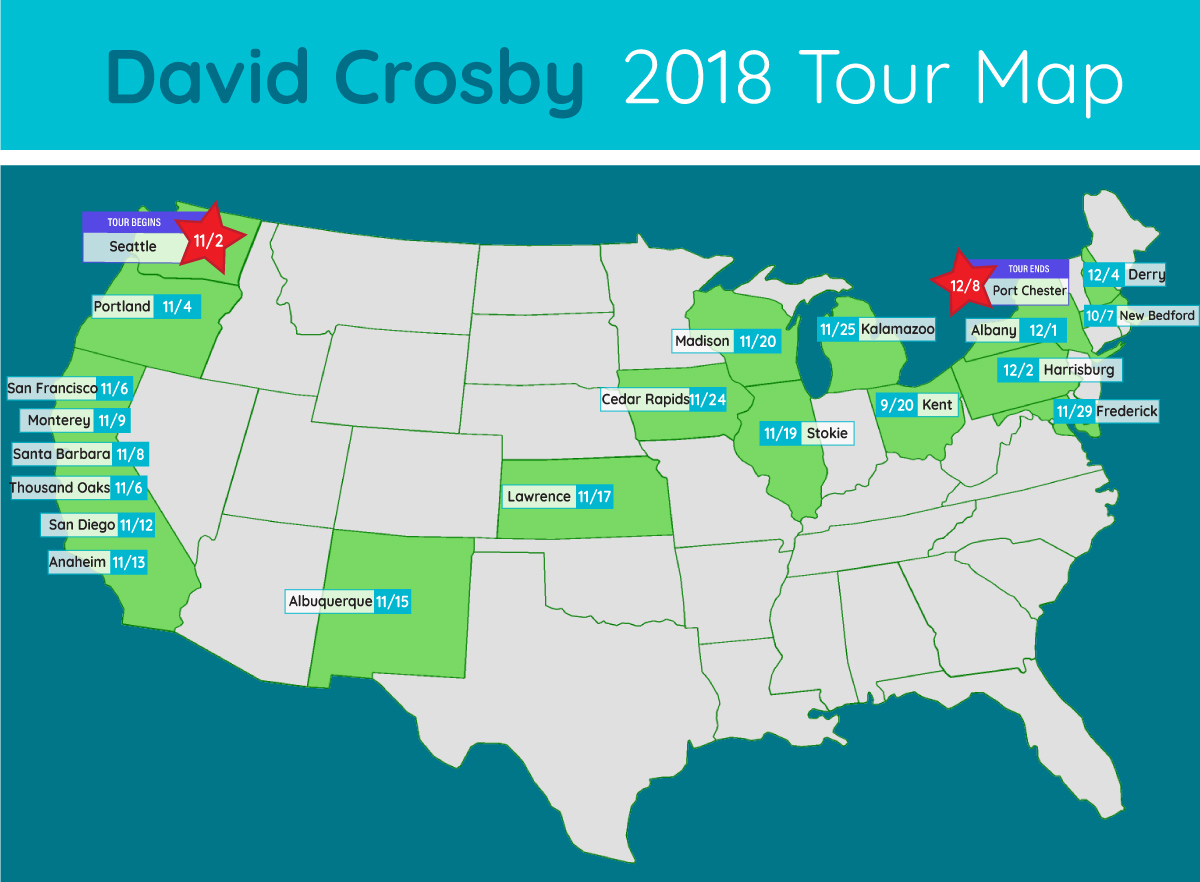 Where is David Crosby and the Lighthouse Band playing near me?