Two-time Emmy Award-winning choreographer Derek Hough has announced plans for his first-ever solo tour! The massive “Derek Hough: Live! The Tour” is set to begin in the spring of 2019 and will take the talented Dancing with the Stars instructor to 60 cities across the United States.

The massive trek will kick off in Charlotte at the Ovens Auditorium on April 5, 2019. From there, Hough will dance his way through major cities like Durham, Atlanta, Albany, Detroit, Nashville, and Cincinnati. He will take a final bow in Reading, Pennsylvania at the Santander Performing Arts Center on June 15, 2019.

Hough, the only six-time champion in the franchise history of the hit ABC show Dancing with the Stars, previously toured with his sister, Julianne, who is also an instructor on the show. The siblings wrapped up the third installment of their “Move -- Beyond -- Live on Tour” in 2017.

"I'm so excited about this tour," Hough said in an interview. "One of the things I really wanted to incorporate with this tour, [is to] make it feel different."

Fans can expect this tour to be unique from anything Hough has done in the past, fusing music and dance as he explores styles ranging from ballroom and tap, to salsa and hop-hop.

"It's something I always wanted to do, was bring live musicians, to have live music onstage with the dancing and really infuse them together," he added. "So, you feel that energy, you feel that live-ness in the theater. Yeah, it’s very exciting. Sixty cities, going around every style of dance you could possibly think about, [with] amazing dancers, live musicians... it's going to be a great night. I just love going to cities and meeting people and performing. So, I'm just excited about it!"

Who Is Derek Hough?

Derek Hough grew up as the fourth of five children in Salt Lake City, Utah, where he started dancing at age 11. All his grandparents were dancers, and his parents met while on a ballroom dancing team in college in Idaho. When Hough was 12, his divorcing parents sent him to London to live and study with the top dance coaches. Hough's sister Julianne joined him in London several months later.

Hough attended the prestigious Italia Conti performing arts school where he studied theatre, music and dance. Originally intending to stay for a year, Hough remained in London for ten years, teaching at the Italia Conti, while Julianne returned after five years.

He made his first appearance on Dancing with the Stars in season four (week 6) as a guest instructor with Julianne and Apolo Anton Ohno. He then joined the cast of professional instructors in season five and was paired with Jennie Garth. Hough and Garth were eliminated in the semi-finals finishing the competition in fourth place. Since then, Hough has gone on to win a total of six championships, making him the most decorated instructor on the show.

Hough is a former WDSF World Latin Champion (2002), as well as a Blackpool U-21 Latin title holder with Aneta Piotrowska. He has won the LA Outstanding Dancer of the Year and the New York Dance Alliance Outstanding Dance awards. In 2013, Hough won the Emmy Award for Outstanding Choreography, and did so again in 2015. Throughout his career, he has been nominated for 8 Emmy Awards for choreography.

Hough is also a best-selling author. His memoir Taking the Lead; Lessons from a Life in Motion hit stands in 2014 and rapidly was named to the prestigious New York Times Best-Seller list during two non-consecutive time periods. 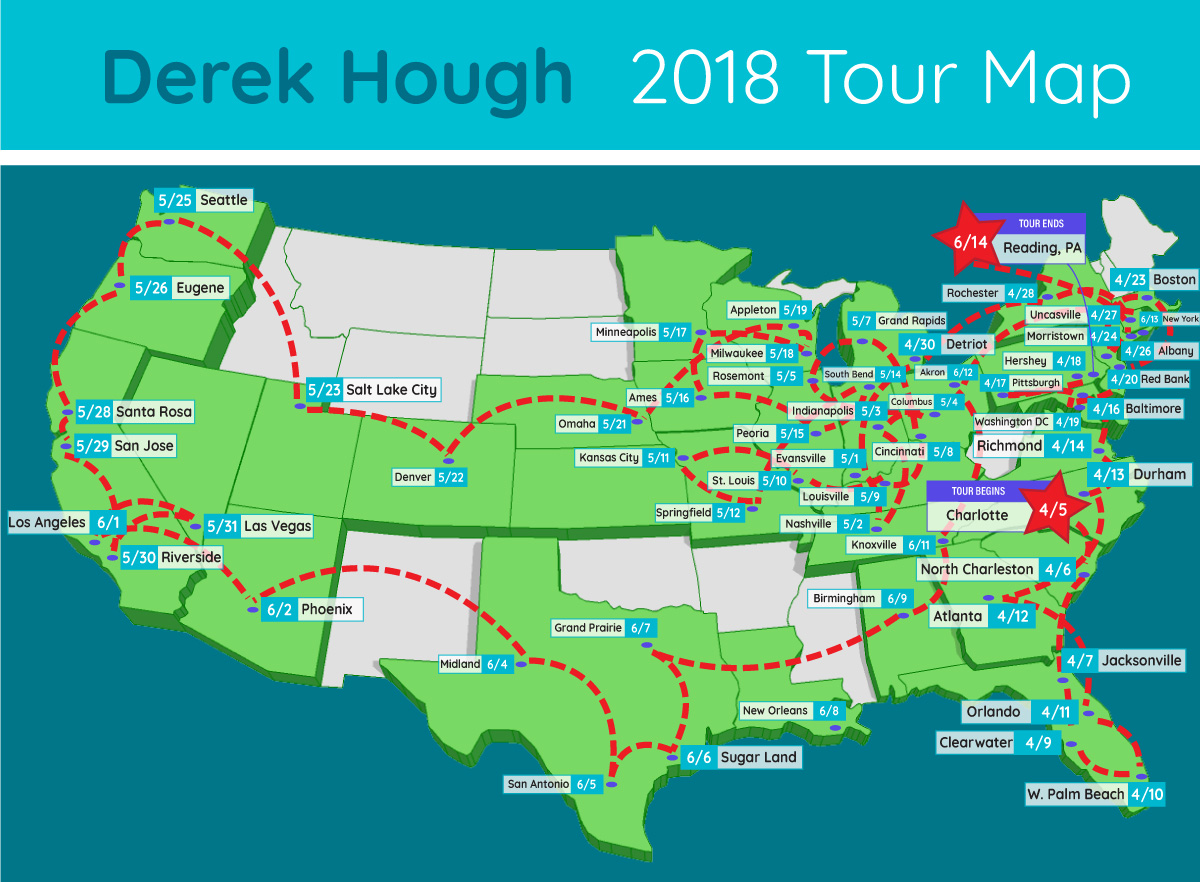 Where is Derek Hough performing near me?