Soja announced they will embark on the all-new 2018 'Poetry in Motion Tour', bringing the Grammy-nominated reggae rockers to a stage near you this fall!

The 'Poetry in Motion' Tour is set to launch October 17 in Raleigh, North Carolina. The tour will see the band play in cities including Nashville, Seattle, Phoenix and San Diego with a final show in New Orleans, wrapping the 22-date trek on November 18.

SOJA will be joined by fellow reggae band Collie Buddz, rock band Twiddle, and hip-hop artist Xiuhtezcatl on select dates over the course of the month-long run.

Soldiers Of Jah Army (SOJA) is an eight-member reggae band hailing from Arlington, Virginia. Before the band’s formation in 1997, the members had been performing together on and off for some time. Frontman Jacob Hemphill and bassist Bob Jefferson met in the first grade, meeting dummer Ryan Berty, keyboardist Patrick O’Shea and percussionist Ken Brownell later in middle and high school.

SOJA recorded CREEPING, their first album, in 1998. Their self-titled EP was released in 2000 and was met with positive reviews from critics. Their debut full-length album, Peace in a Time of War dropped in 2002, and they later released a Dub version of the album titled Dub in a Time of War in 2005.

Their second full-length album, Get Wiser, hit shelves in 2006. It debuted in the Top 10 Reggae Albums on iTunes and has continued to remain in the top 100 since its release. Get Wiser was followed by the release of three more studio albums, Born in Babylon (2009), Strength to Survive (2012), which reached number 26 on the Billboard 200 and number one on the Top Reggae Albums chart, and Amid the Noise and Haste (2014) which earned the group a Grammy nomination for Best Reggae Album.

Their latest album, Poerty in Motion, was released in October 2017 and contained the singles “More” and “Bad News.” The album marks the start of a new chapter for SOJA, bringing the group back to the beginning and connecting them to the reason they began this musical journey in the first place.

“We’re going back to our roots and what we do best,” Hemphill says. “We’re remembering why we started this band and the magic of what we’ve built. We were lucky enough to create our own family and we picked every brother by hand. This album feels like we’ve had an amazing family reunion. It’s a blueprint for our future.”

SOJA is known for their energetic and impassioned live performances. They have toured with several well-known acts over the years including fellow reggae rock band 311, Dave Matthews Band, and Incubus . From every album released to each song performed live, it all comes down to feeling a connection with each other and with their fans. “Nothing worth doing in life can you do by yourself,” Hemphill says. “We’re in this together.” 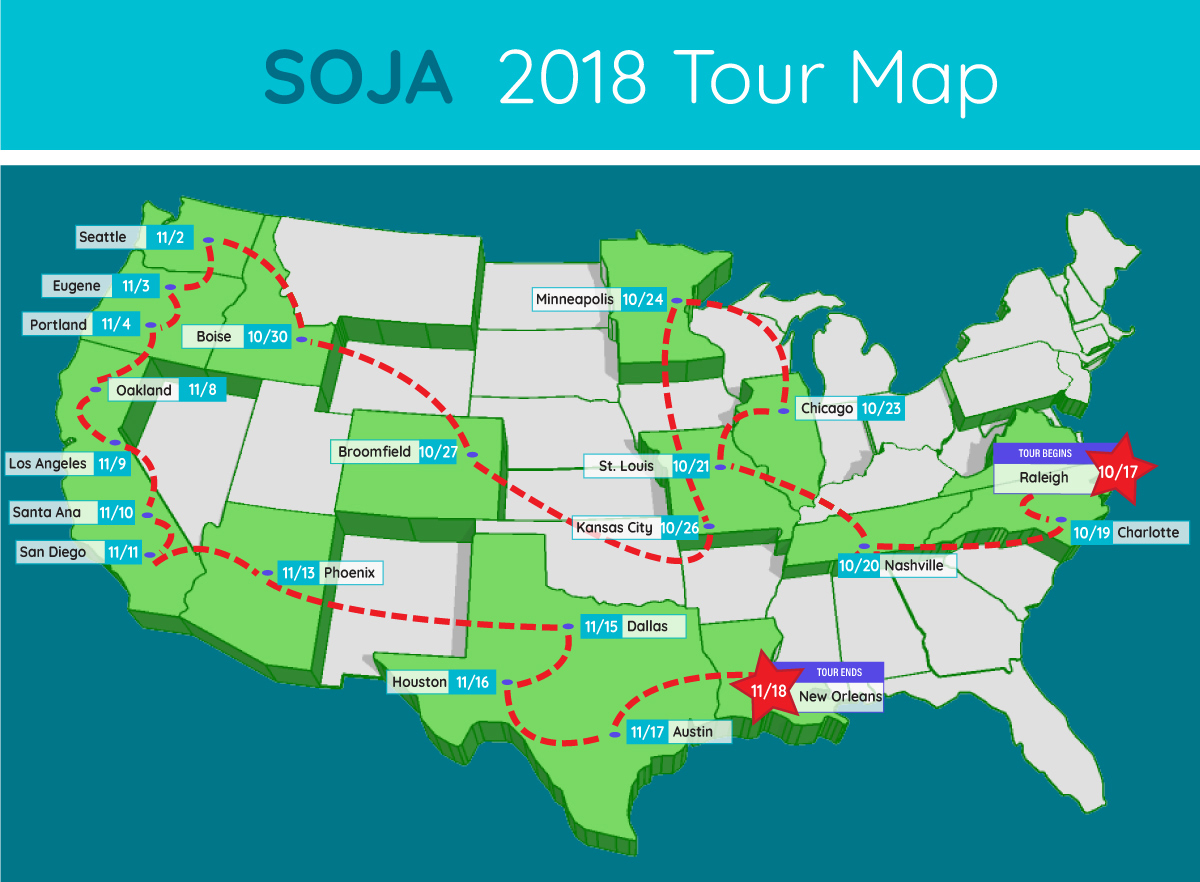 Where is SOJA playing near me?