Indie rock veterans Modest Mouse are following up their string of spring and summer tour dates with an additional fall leg. The band will keep “floating on” through 2018 with 26 new shows that span two months, taking the band across the United States.

Their latest jaunt will kick off on September 17 in the La Crosse Center Arena in La Crosse, Wisconsin. From there, Modest Mouse will hit a slew of cities such as Cincinnati, Buffalo, Syracuse, Portland, and Waukegan. The leg will close out with a show in Wichita’s The Cotillion on October 21.

The band is currently doing its summer run, with several scheduled appearances on music festival lineups including Sasquatch Music Festival in Washington, Forecastle Festival in Kentucky, and Float Fest in Texas.

Modest Mouse’s last album release came in 2015 with Strangers to Ourselves, their first album in eight years since 2007’s We Were Dead Before the Ship Even Sank. Lead vocalist Isaac Brock has teased that a follow-up album is in the making, describing it as a part two to Strangers to Ourselves. The release date has yet to be set.

Who Is Modest Mouse?

Modest Mouse formed in 1992 in Issaquah, Washington, a suburb in Seattle. Its founding members are Isaac Brock (current lead singer/guitarist), current drummer Jeremiah Green, and former bassist Eric Judy. Since the band's 1996 debut album, This Is a Long Drive for Someone with Nothing to Think About, the group's lineup has centered on Brock and Green. Judy performed on every Modest Mouse album until his departure in 2012. Guitarist Johnny Marr joined the band in 2006, shortly following percussionist Joe Plummer and multi-instrumentalist Tom Peloso, to work on the album We Were Dead Before the Ship Even Sank. Guitarist Jim Fairchild joined the band in 2009.

The band's name is derived from an excerpt from "The Mark on the Wall," Virginia Woolf’s first published story. It reads: "I wish I could hit upon a pleasant track of thought, a track indirectly reflecting credit upon myself, for those are the pleasantest thoughts, and very frequent even in the minds of modest mouse-coloured people, who believe genuinely that they dislike to hear their own praises."

In 2000, Modest Mouse released their third album, The Moon & Antarctica, which earned them critical acclaim. They followed up with the hit album Good News for People Who Love Bad News in 2004. It was certified platinum and yielded two hits, “Float On” and “Ocean Breathes Salty,” and was nominated for a Grammy Award for Best Alternative Music Album. “Float On” was nominated for Best Rock Song. The song "The Good Times Are Killing Me," featured on the album, is about the band’s periodic indulgence in drugs, like pills, alcohol and marijuana. Brock has confessed to regretting how much and how often he used to do drugs.

Their next album, We Were Dead Before the Ship Even Sank, was released in 2008 and was the first Modest Mouse album to reach number one on the Billboard 200. It spawned the hit singles “Dashboard,” “Miss the Boat,” and “We’ve Got Everything.”

Their music is heavily influenced by fellow indie groups like the Pixies and Talking Heads. 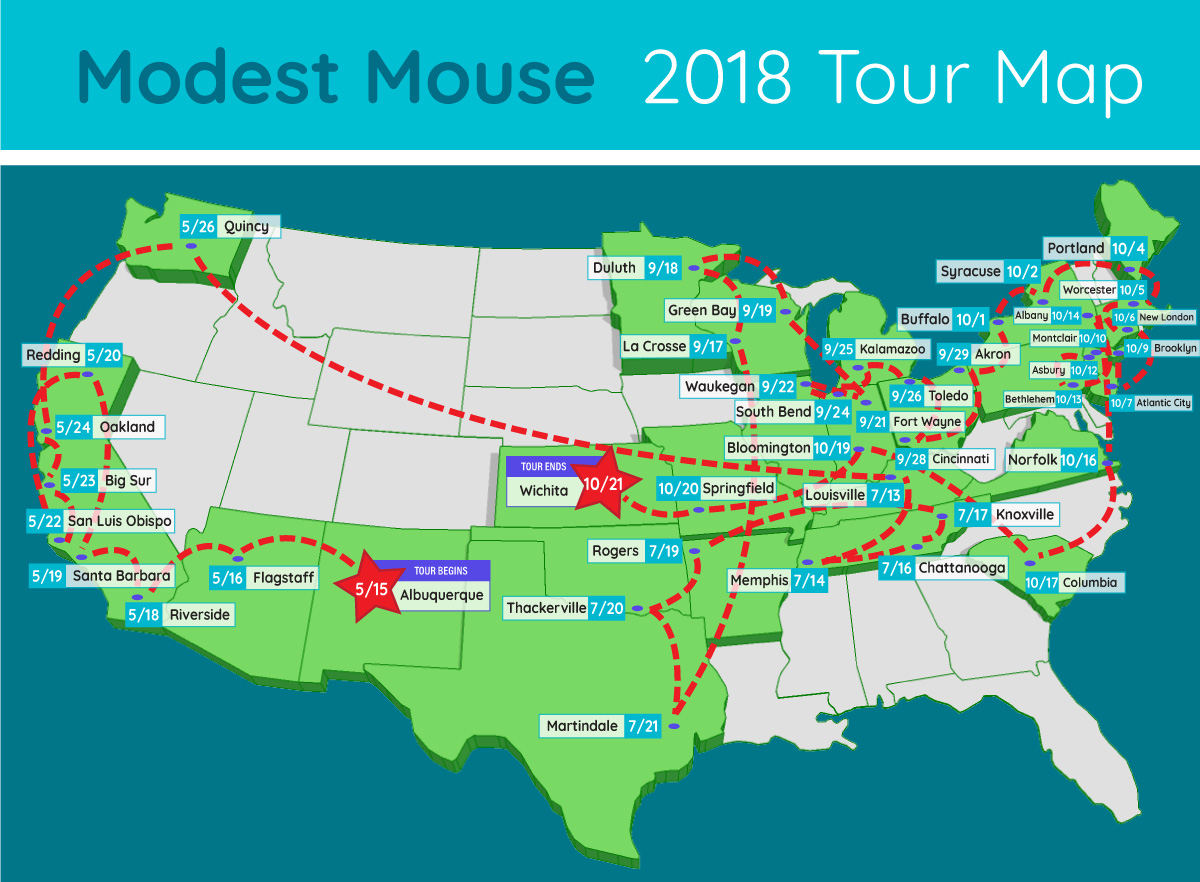 Where is Modest Mouse playing near me?