Attention Soulrocker Fam! Michael Franti and Spearhead have just announced extended tour dates, bringing the "Sound of Sunshine" to a stage near you this fall!

The October leg of the 'Stay Human' Tour is set to kick off on October 4 with a show in Huntington, New York. From there, Franti and his long-time band will travel to cities along the east coast and Southeastern U.S., hitting cities like Port Chester, Philadelphia, Atlanta, Key West, and St. Petersburg. A final performance on October 27 in Saint Augustine, Florida will wrap up the 17-date trek.

“We can’t get enough of the Soulrocker Fam so we are going back on tour this fall,” Franti said in a posted message to fans via social media. “Come see us up and down the East Coast this October! It’s going to be epic!”

Franti and Spearhead will be joined on stage once more by special guests, hip-hop artist Dustin Thomas and pop singer/songwriter Victoria Canal.

Who Is Michael Franti & Spearhead?

Michael Franti is an American musician, poet, singer and songwriter, and the creator of his current independent project, Michael Franti & Spearhead. Franti segued into songwriting after taking up an initial interest in poetry. He bought his first bass guitar in high school and began to experiment writing music that was influenced by hip hop, punk and reggae.

Franti formed two music groups, The Beatnigs and The Disposable Heroes of Hiphoprisy, between 1986 and 1993 before forming Spearhead in 1994. The group has released a total of nine studio albums to date and have gained a worldwide audience through touring and appearances in the media. Franti and Spearhead are known for the social and environmental activism. They have banned the sale of plastic water bottles at their shows and power their tour bus on biodiesel.

Franti is an outspoken supporter for peace and social justice issues, especially in the Middle East. In 1998 he began producing the Power to the Peaceful Festival each year. Many of his songs tell of a desire for change in the world and the power that can come from unifying people. Lyrics from the song “Bomb The World,” written in the aftermath of 9/11, have made their way onto protest signs and t-shirts all around the world, and have been prominently featured in peace demonstrations both large and small.

Franti is an avid yoga enthusiast and opened his very own yoga retreat hotel, Soulshine Bali, in Bali, Indonesia. Several of his shows feature a yoga class for fans to take part in before the rocker hits the stage. In 2000, Franti decided he no longer wanted to wear shoes and has gone barefoot ever since except for occasionally wearing flip-flops as required in restaurants or for air travel. 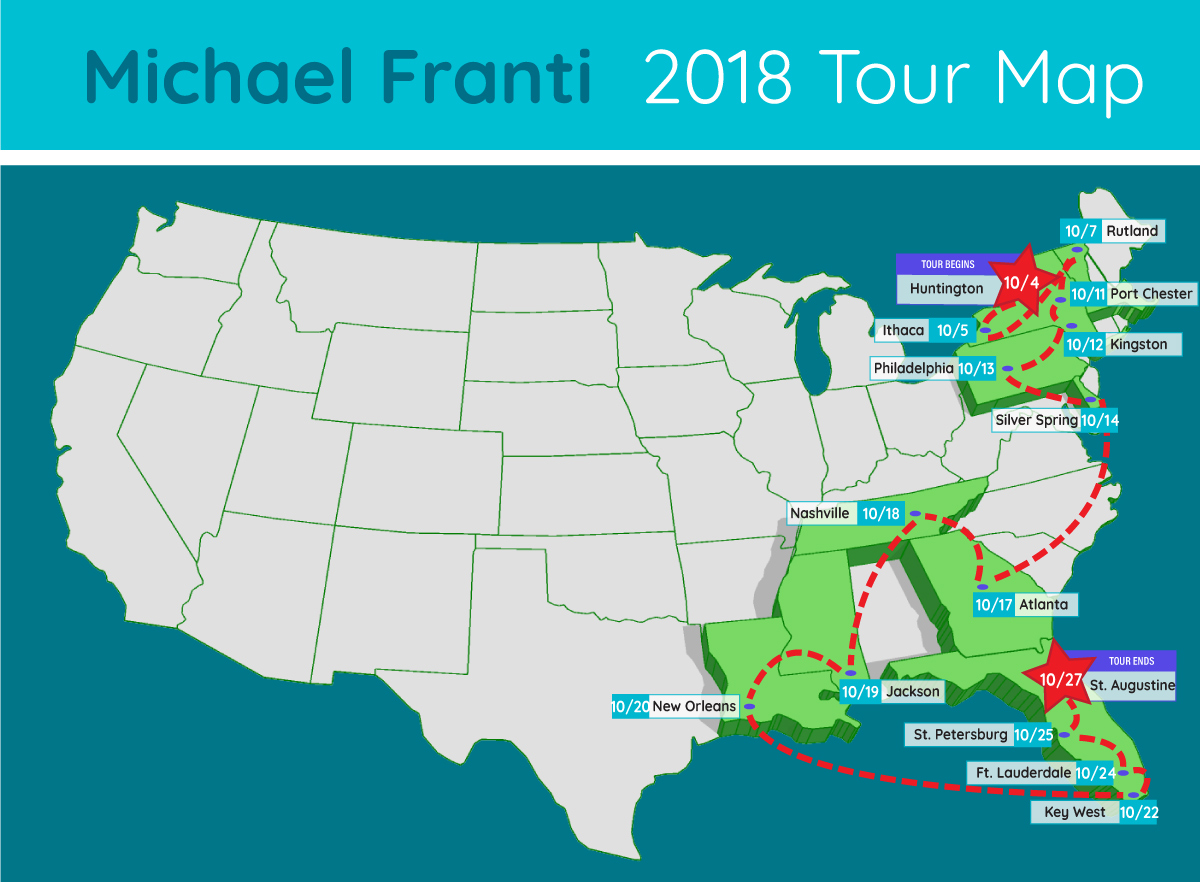 Where are Michael Franti & Spearhead playing near me?