Mac DeMarco Gears Up for First Ever Headlining Tour

The all-new “Purple Bobcat Next to River Tour” will feature Mac DeMarco playing solo for the first time on stages across the U.S. this winter!

The 16-date trek will launch on November 3 with a show in Long Beach, CA. From there, he will travel to cities including Asheville, Atlanta, New Orleans, and San Antonio before wrapping the month-long journey in Tucson on December 3.

The “Purple Bobcat Next To River Tour” will come on the heels of a string of U.S. and European shows featuring DeMarco’s full band this fall.

News of the upcoming tour wasn’t the only thing he had to share with fans, also announcing the launch of his very own record label...Mac’s Record Label!

Who Is Mac DeMarco?

Canadian self-proclaimed “jizz-jazz” extraordinaire Mac DeMarco has been making a name for himself since first emerging onto the music scene in 2008. After spending some time in a group dubbed Makeout Videotape, DeMarco stepped out on his own to pursue a solo career. His time with the group was a hint at the style and sound audiences would go on to see from the young musician as a one-man act, with some of the songs he wrote while part of Makeout Videotape even making their way onto his debut solo EP, Rock and Roll Night Club, in 2012.

DeMarco’s rise to fame came with the release of his debut full-length album 2 in 2012. The album featured the single “Moving Like Mike,” which was featured on a commercial for retail giant Target. His second album, Salad Days, followed in 2014 and debuted at the number 30 spot on the Billboard 200. The debut of Salad Days marked DeMarco’s highest chart peak and best sales week until the release of Another One, a mini-LP that dropped in 2015. His last album, This Old Dog, hit shelves in May 2017 and earned universal praise from music critics.

DeMarco’s witty personality and unique style has resonated with audiences around the world. He has become just as popular for his innovative music videos as he has for the music itself. Whether he’s taking time to interact with fans on social media (we’re looking at you, Gary, Jerry, Tony and Randy) or recording new content on his signature $30 guitar, DeMarco continues to turn heads and shows no signs of slowing down. 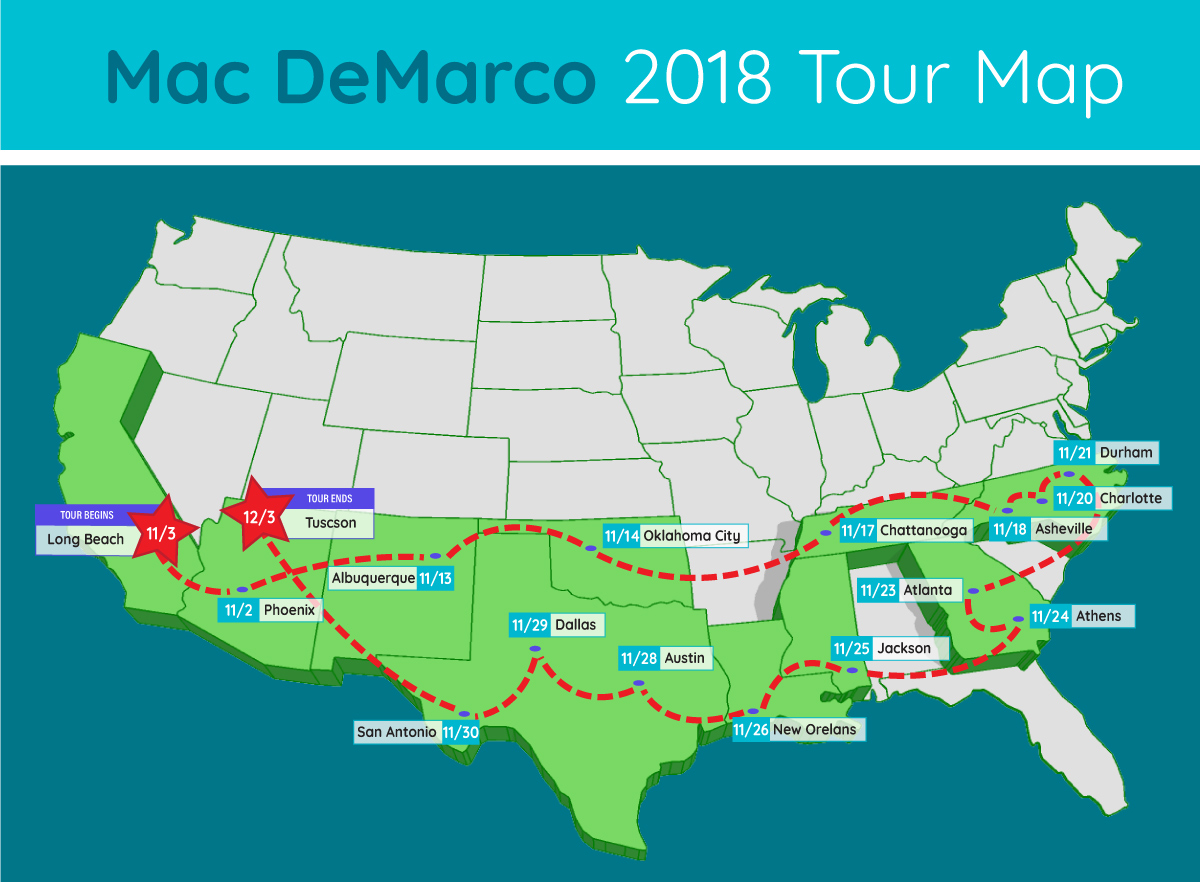 Where is Mac DeMarco playing near me?