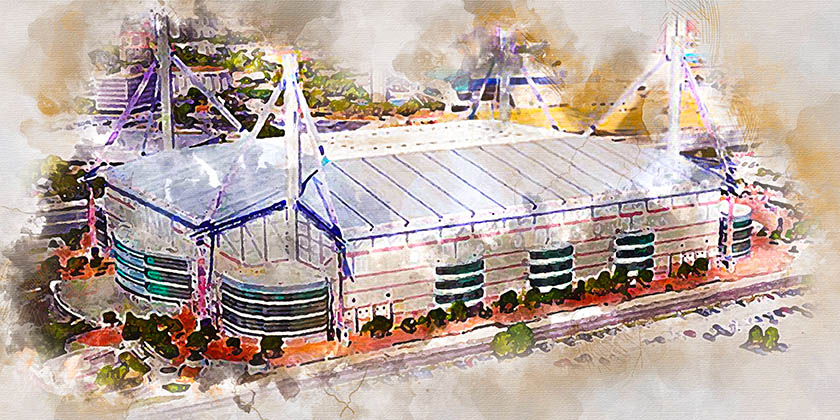 As insinuated by its name, the Alamodome is a domed venue that is the site of this year’s NCAA Men’s Basketball Final Four. Built in 1993, this multi-purpose facility boasts a size of 160,000 square feet and is located in downtown San Antonio, Texas. The Alamodome was home to the San Antonio Spurs for about a decade before they moved to the AT&T Center.  It is the 10th-largest covered field sports stadium by capacity.

Check out the information below for an in-depth look at the stadium, including compiled information from visitors. You can use these first-hand experiences to prepare for your next event in the most thorough way possible.

Walking Map from River Walk to the Alamodome 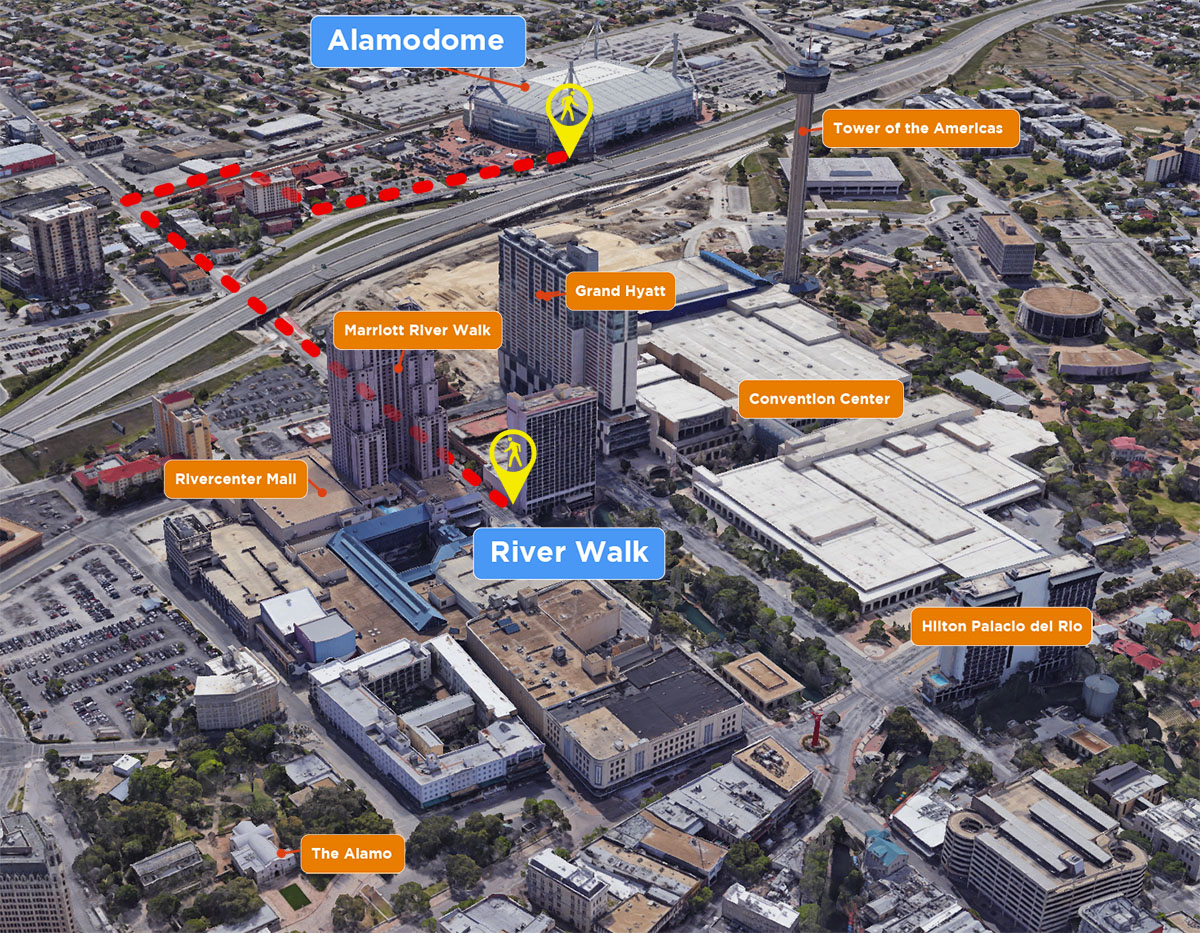 Exit on US-90 East to New Braunfels Street.

Public transit: The San Antonio VIA Metropolitan Transit connects you to the heart of San Antonio, with the VIVA Centro acting as a direct link to the Alamodome for easy access.

It has been reported that parking near the Alamodome can be challenging and pricey. Traffic can put you behind schedule as reported delays can be as long as 30 min to 1 hour depending on the event timing.  Also, Parking at the Alamodome is available only by pre-purchasing a pass. If you don’t have an Alamodome parking pass, do not try to exit near the facility. The most congested exits are 281/37 at Houston, Commerce and Cesar Chavez. 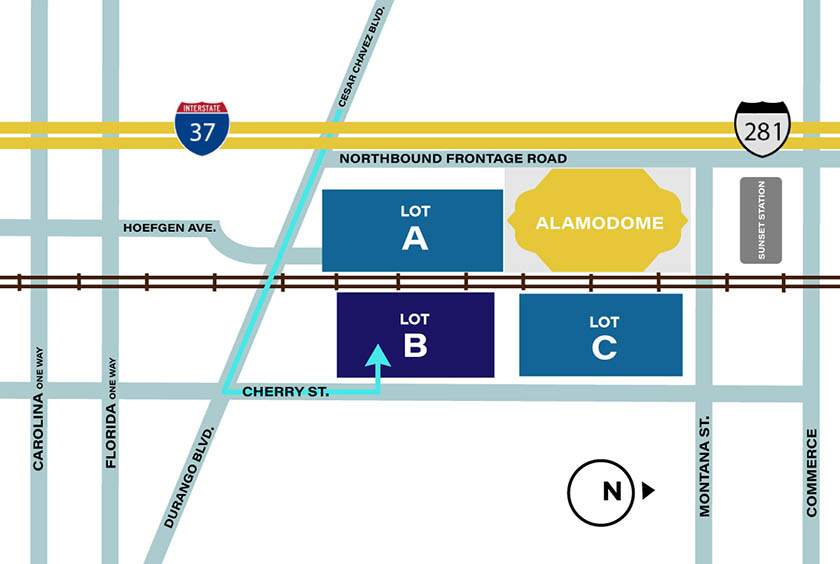 If you’re planning on tailgating at the dome, Lots B and C are the sole designated areas for festivities. They will open 4 hours prior to the start of the game and close 1 hour after the game ends. Here are some rules and guidelines for tailgating:

To tailgate, you must have one parking permit per space, which you should purchase in advance online or bring cash to pay (parking is cash only).

We suggest that you arrive early to snag a good spot since they are first-come, first-served. If you’re in a large group, you should try to arrive together in order to secure spots next to each other.


There will be patrollers at the parking lots so be on your best worst behavior! Any violators will, unfortunately, be ticketed and removed from the premises.

The Alamodome has a clear bag policy, so if you plan on bringing a purse make sure it fits within the specified guidelines. Approved bags include clear ones that are smaller than 12” x 6” x 12”. If you don’t have a clear bag, you can bring solid bags smaller than 5.5” x 8.5”. Also, 1-Gallon plastic freezer bags, medical or diaper bags are allowed.

Concessions are not one of the best features of the Alamodome according to reviewers. The options are limited and there are no gluten-free choices. Beer fountain drinks and water are the only drink options.

It is our recommendation that you take advantage of the many restaurant options near the venue or pre-game at San Antonio’s world-famous River Walk. Walking distance from River Walk is 0.9 miles and will take on average 17 minutes.

Seating views are hit or miss. The stands are configured in a boxy shape instead of the usual curve, making for occasionally awkward or amazing views, depending on where you’re at. The stadium isn’t sprawling, so overall seating is decent. There are television monitors on the first level so that you can see the ceiling better. In addition, the seats do not have armrests but are comfortable. 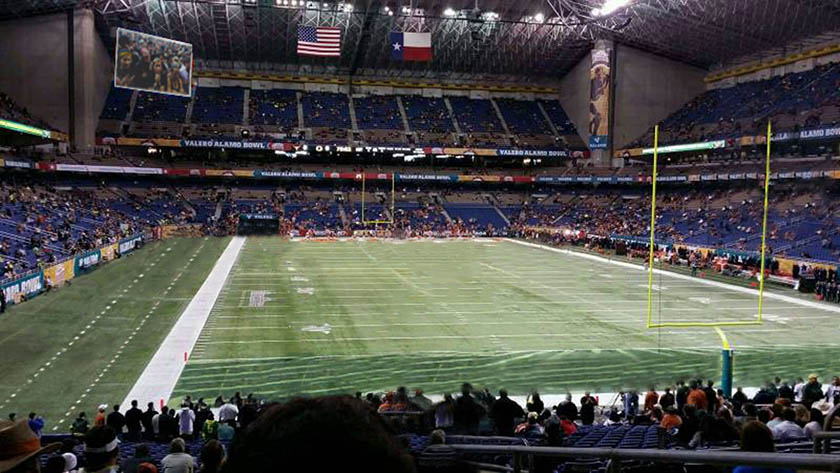 Visitors of the Alamodome have said that the stadium is the perfect shape and size for a football or soccer field, but since it is rectangular it does not make the best baseball field. The right side of the field is very small while the center and left field are massive.

If you’re going to see a concert or some other musical experience, the sound at the Alamodome has been reported to be of very good quality. The amplified sound system could be heard above the crowd noises. If you’re sitting in the corners of the stadium, it may be a bit more difficult to hear as the sound is more muffled.

There are plenty of bathrooms, so you won’t have to wait long lines. However, be prepared to brave the crowded walkways of the concession stands.

10 Closest Hotels Near the Alamodome

Check out the schedule below to buy tickets to see a concert or event at Alamodome today!