Due to popular demand from fans, Dropkick Murphys and Flogging Molly both shared news that they were heading for the West Coast, extending their 2018 co-headlining tour!

Following a quick few days with shows in Canada the bands will cross back over the border to kick off the U.S. leg of the tour in Eugene, Oregon on September 21. From there they will hit cities like Seattle, Bonner, San Francisco, and Irvine before wrapping up with a performance on September 29 in Mesa, Arizona.

The two Celtic punk-rock groups joined forces for the first time earlier this month, embarking on an 18-date trek across North America and closing with a show on June 23 in New Hampshire.

“It’s been a long time in the making,” said Dennis Casey, guitarist and back-up vocalist for Flogging Molly. “There had been a lot of talk about it over the years. I know I’ve talked with (Dropkick Murphys bassist) Ken Casey about it but it never really came to fruition. Our schedules always clashed. It took an Italian promoter to put it all together. We were finally able to try it in Italy, and it went really well. There were 80,000 people there, so we said, ‘Why don’t we do this some more?’”

Both Dropkick Murphys and Flogging Molly are known for their highly energetic and fast paced Irish folk-punk tunes, and the match up seems to be a natural mix for fans.

“There will be a lot of crossover,” Casey said. “I’ve seen thousands of Dropkick Murphys T-shirts at our shows, and I’m sure Dropkick has seen thousands of our shirts. You can tell there’s a lot of cross-pollination, though I’d imagine we’ll see some new fans on this tour, too, who’ve maybe never even seen either band but feel inspired to now because of what they’ve heard and the fact both bands are together on this tour.”

Who are Dropkick Murphys?

Dropkick Murphys formed in 1996 as a group of friends looking to play music as a pastime in Boston. The band began playing in the basement of their friend’s barbershop with a goal to create their own music by blending each of their favorite styles into one distinct sound. The result turned out to be one loud, chaotic, raucous mix and, to their surprise, was liked by anyone who happened to hear it.

They made a name for themselves within the greater Boston area through constant touring and annual Saint Patrick’s Day shows. Eventually the group was signed, and they have since gone on to release nine studio albums. Their 2004 single “Tessie” became the group’s first mainstream hit.

Their 2005 album The Warrior’s Code included hit single “I’m Shipping Up to Boston,” which was featured in the 2006 Academy Award-winning film, The Departed. The single became the band’s first Platinum-selling single and remains one of their best-known songs to this day.

Their latest project, 11 Short Stories of Pain & Glory, hit shelves in January 2017. The album debuted at the number 8 spot on the Billboard charts.

Dropkick Murphys is known for their loud and energetic presence during live performances.

Who is Flogging Molly?

Flogging Molly came together in 1993 as a rock band with a Celtic feel in Los Angeles. The band would play a mix of traditional Irish folk music and rock, combining lead singer Dave King’s poetic lyrics with the fast-paced melodies. The group began to play weekly on Monday nights at an LA pub called Molly Malone’s and began to build up a loyal following. The band’s name came from the bar where their very first faithful fans would come to see them play each week.

“We used to play there every Monday night and we felt like we were flogging it to death, so we called the band Flogging Molly,” King said. The band released their debut live album Alive Behind the Green Door in 1997 and has since released six more studio albums.

Their fourth studio album, Float (2008), was dubbed “one of the most important CDs of the year, if not the decade” by Alternative Press magazine. Members of the band also noted the album’s significance as influential to their career, sharing that it was the first album they had recorded in Ireland. Float reached the number four spot on the Billboard 200, and included the band’s first two chart singles, “Requiem for a Dying Song” and “Float”. While on tour promoting the album, King married bandmate Bridget Reagan in a ceremony that took place in Tokyo.

In March 2015, Flogging Molly held the first of their yearly Salty Dog Cruises. The cruise annually sails to the Caribbean and features live performances from the band as well as other well-known supporting acts. The 2018 cruise is set to take place April 20-23 and will feature guest appearances by The Offspring, Buzzcocks, The Vandals, and many more.

Flogging Molly’s latest studio album, Life is Good, dropped in June 2017. It was their first studio album to be released in six years, and the first to feature current drummer Mike Alonso. 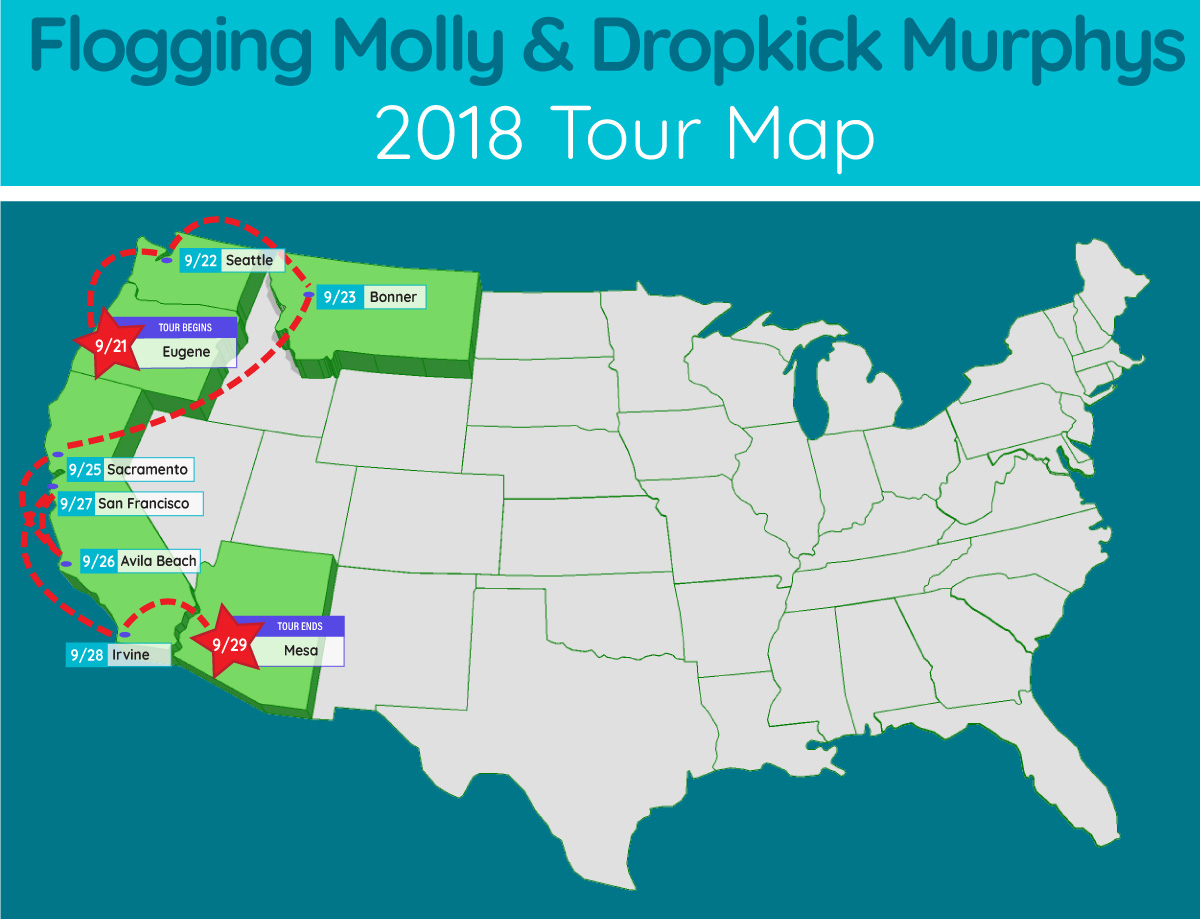 Where are Dropkick Murphys and Flogging Molly playing near me?