Cher and Dave Chappelle to Perform at Borgata’s 15th Anniversary

The Goddess of Pop and the comic genius of America are the latest to join the high-profile entertainers celebrating the Borgata’s 15th anniversary this summer! The New Jersey hotel has revealed that Cher and Dave Chappelle will be among other big names like Britney Spears, Barry Manilow, and Ringo Starr to honor the Borgata’s lengthy legacy as the top-grossing hotel, casino and spa in Atlantic City. 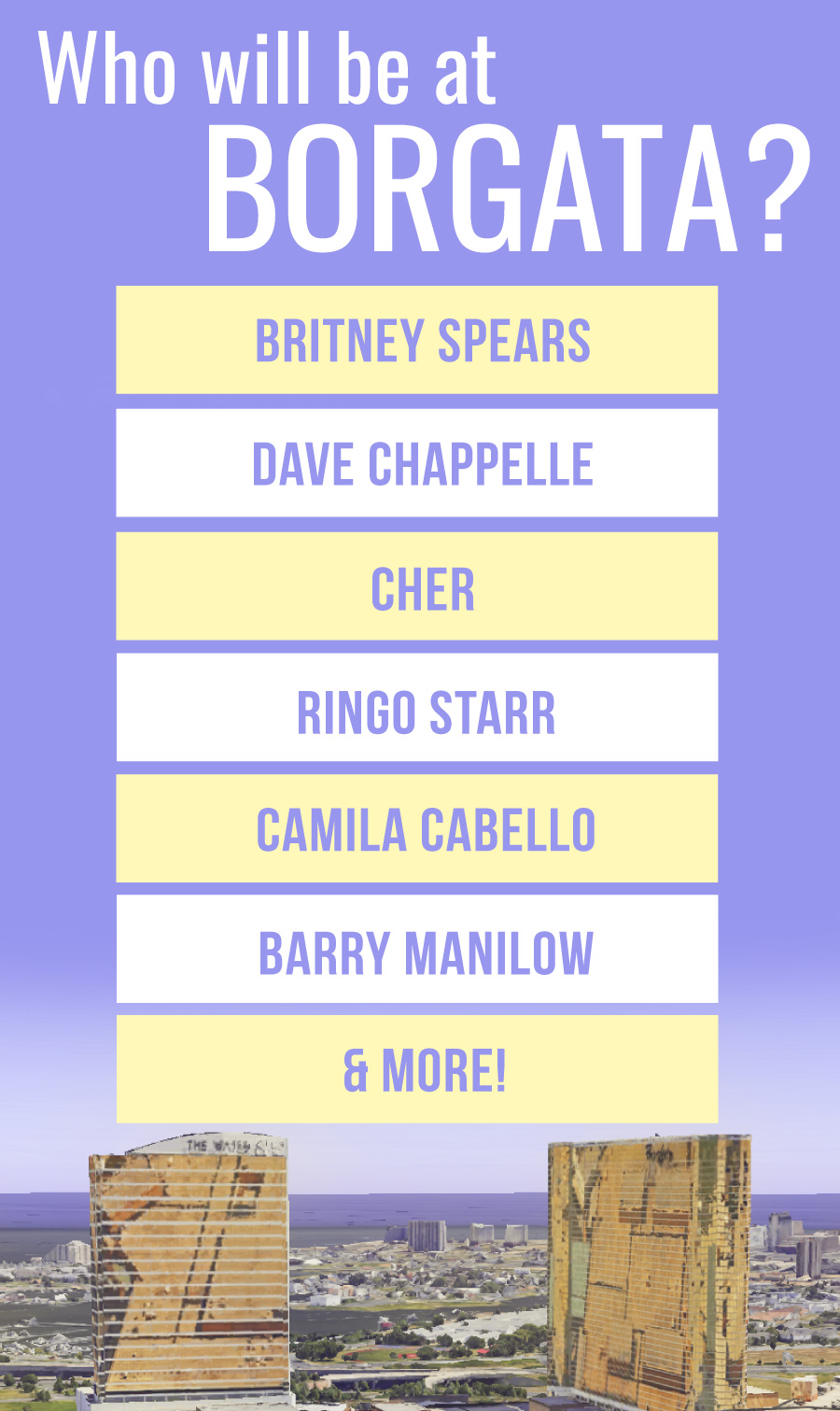 The Borgata is also planning a 15X slot dollars promotion and $15,000 every 15 minutes as a part of its 15th birthday.

Borgata Hotel Casino & Spa opened in 2003 as Atlantic City’s premier luxury hotel experience, featuring 2,002 rooms that make it the largest hotel in New Jersey. This upscale facility is owned by MGM Resorts International and offers several forms of entertainment, including an event center, nightclubs, a comedy club, gaming, and a spa. With 161,000 square feet of gaming space, the Borgata Poker room is its signature attraction. The hotel also offers casual and fine dining at notable restaurants including Bobby Flay Steak, Izakaya, Mixx, and Old Homestead Steakhouse. With a prime location overlooking the marina in Renaissance Pointe, this upscale casino resort is only 2 miles from the Atlantic City Boardwalk and in the heart of the action.

Cherilyn Sarkisian LaPierre was born in El Centro, California to Armenian and Cherokee Native American parents. She was an undiagnosed dyslexic in school which led to low grades. She had to learn by listening rather than reading.

Cher began working as a session singer to help finance her acting career. Her future husband Sonny Bono introduced her to Phil Spector, who hired her as a backing vocalist. After releasing two singles under the name Caesar And Cleo, Sonny and Cher gained stardom as Sonny and Cher. The pair gained popularity in 1965 when their song "I Got You Babe" reached number one on the American and British charts. By the end of 1967, they had sold 40 million records worldwide and had become an “it” couple.

Throughout this period Cher also sustained a solo career, initially singing a paean to Ringo Starr ("Ringo I Love You") under the pseudonym Bonnie Jo Mason. Thereafter, she secured several hits, including a cover version of the Byrds "All I Really Want To Do." In 1966 she released her first million-seller song, "Bang Bang (My Baby Shot Me Down)".

Cher also became a television personality in the 1970s with The Sonny and Cher Comedy Hour, which had a three-year run and gained a 30-million viewership weekly. On the side, she continued to establish herself as a solo artist with chart-topping singles like "Gypsys, Tramps & Thieves", "Half-Breed", and "Dark Lady". She became the first actress to reveal her belly button on TV in 1975, when her navel was seen during an episode of The Cher Show.

Cher and Bono divorced in 1975 and she released her comeback disco album in 1979, Take Me Home. In 1982 she made her Broadway debut in the play Come Back to the Five and Dime, Jimmy Dean, Jimmy Dean and starred in its film adaptation.

In 1998 she released the album Believe, whose title track became the biggest-selling single of all time by a female artist in the U.K. It featured the use of Auto-Tune for one of the first times in music, which was also known as the "Cher effect". Her 2002–2005 Living Proof: The Farewell Tour became one of the highest-grossing concert tours of all time. Cher's first studio album in 12 years, Closer to the Truth (2013), became her highest-charting solo album in the U.S. when it debuted at number three on the Billboard 200.

Throughout her lengthy career, Cher has won many awards in television, film and music. These include an Academy Award, a Grammy, an Emmy, three Golden Globes, and a star on the Hollywood Walk of Fame.

Who Is Dave Chappelle?

David Khari Webber Chappelle was born in Washington, D.C. as the youngest of three children, but grew up in Silver Spring, Maryland. His parents were politically active and predicted he would become a comedian one day. Chappelle’s comic inspiration came from Eddie Murphy and Richard Pryor, and he moved to New York City to pursue his comedy career. He performed at Harlem's famed Apollo Theatre in front of the infamous "Amateur Night" audience, but he was booed off stage. Chappelle described the experience as the moment that gave him the courage to continue his show business aspirations. He quickly made a name for himself on the New York comedy circuit, even performing in the city's parks.

He began his acting career in 1993, landing supporting roles in several box office hits like The Nutty Professor, Con Air, You've Got Mail, Blue Streak, and Undercover Brother. His first lead role was in the 1998 comedy film Half Baked.

In 2003, Chappelle became more widely known for his sketch comedy T.V. series Chappelle’s Show, which earned high ratings. It ran for only two years but is still played on late night television networks around the world today. Upon leaving the show, Chappelle began performing stand-up comedy across the U.S.

By 2006, Chappelle was the "comic genius of America,” according to Esquire. In 2017, Rolling Stone ranked him number nine in their "50 Best Stand Up Comics of All Time." Chappelle earned an Emmy Award for his guest appearance on Saturday Night Live in 2017 and a Grammy Award for his Netflix special The Age of Spin & Deep in the Heart of Texas.

Check out all the amazing artists performing for Borgata's 15th Anniversary and see your favorite performer today!