Romeo Santos Is Golden With Second Leg of Tour

Acclaimed bachata singer Romeo Santos has some exciting news for fans eager to experience his energetic live shows! The former Aventura member has confirmed he will be making stops in unvisited cities, adding 18 new dates to his “Golden Tour.”

The second leg will commence with a show at Las Vegas' MGM Grand Garden Arena on September 15. From there, Santos will bring the heat to several cities, including Seattle, Kansas City, Brooklyn, Duluth, and Miami. The tour will wrap on October 21 in Dallas at the American Airlines Center.

Santos concluded the first leg of his tour back in April after a two-month run. The superstar is promoting his third and latest album, Golden, which dropped last year and yielded the hit singles, “Héroe Favorito" ("Favorite Hero"), "Imitadora" ("Imitator"), "Bella y Sensual" (“Beautiful and Sensual"), and "Sobredosis" ("Overdose”).

Fans can expect to hear these songs and more when Santos takes the stage. He also asks that his “romeistas” help him to put together the setlist.

“I want to offer you the best show,” he said.

Who Is Romeo Santos?

Anthony Santos, professionally known as Romeo Santos, was born in 1981 in The Bronx, New York City, to a Dominican father and Puerto Rican mother. In the early 1990s, Santos, along with his three cousins Henry, Max, and Lenny, founded a group called "Los Tinellers" ("The Teenagers”). The group released an album called Trampa de Amor, and by the end of the decade, they changed the name of the band to Aventura.

Santos’ role in the group was as the main songwriter, producer and lead singer. Aventura made their big break in 1999, with the hopes of breaking bachata music into the mainstream by fusing it with pop music; more specifically hip hop and R&B. In 2004, the song, "Obsesión" achieved international success, topping the charts across the globe. Aventura released five studio albums in a decade, spawning many top 10 hits like "Un Beso", "Los Infieles", "El Perdedor", "Por Un Segundo", "Dile Al Amor", among others.

Aventura separated in 2011 to focus on individual projects, and Santos embarked on his solo career. He released his debut album, Formula, Vol. 1, that same year. It produced the hit single “You,” which peaked at number one on the Hot Latin Songs and Tropical Songs charts. The second single, “Promise,” featured R&B singer Usher and was also at the top of the charts.

In 2014, Santos became the first Latin artist to headline at Yankee Stadium and sold out an entire double-header show. 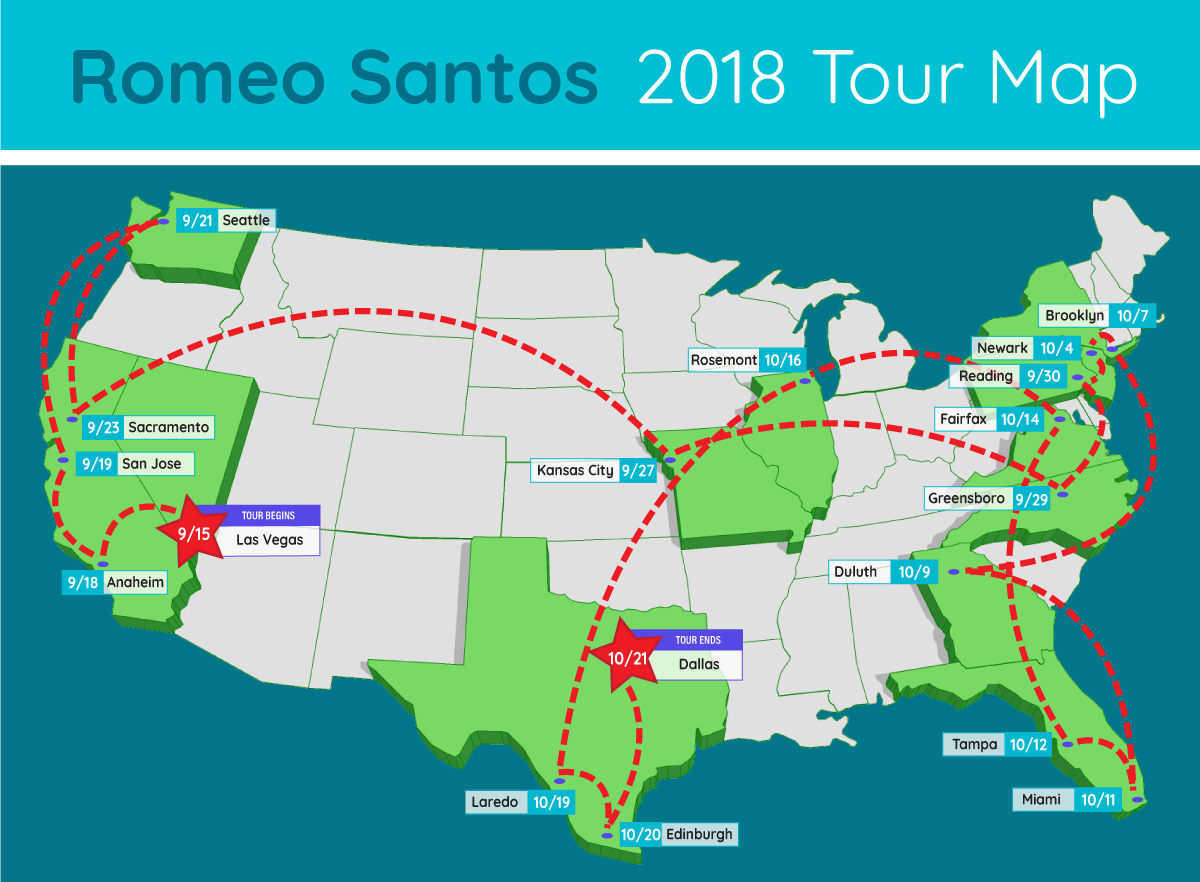 Where is Romeo Santos playing near me?