Beastie Boys’ Michael “Mike D” Diamond and Adam “Ad-Rock” Horovitz are gearing up for a book tour in support of their upcoming memoir Beastie Boys Book, focusing on the history of their legendary rap group.

The six-date “Beastie Boys Book: Live & Direct with Adam Horovitz and Michael Diamond” tour kicks off October 5 in New York City and will include stops in Brooklyn and Los Angeles before a final event in San Francisco wraps up the US leg on November 5. The guys will then head across the pond for the final event of the tour in London at the end of the month.

The “Beastie Boys Book: Live & Direct” events will feature a special guest moderator at each event (names TBA) and will include select readings from the book, a Q&A session with Mike D and Ad-Rock, a live score delivered by the group’s longtime DJ, Mix Master Mike, and more.

Penned by Mike D and Ad-Rock themselves, the 592-page memoir tells the history of the Beastie Boys. The narrative covers everything including their transition from “teenage punks to budding rappers,” the overnight success of Licensed to Ill, the messy fallout that followed, and their rebirth as musicians and social activists.

Beastie Boys Book is set to hit shelves on October 30.

Who Are The Beastie Boys?

The Beastie Boys emerged from New York City in 1981 initially as a four-piece hardcore punk band. After finding local success with their 1983 experimental hip-hop single “Cooky Puss,” the band dwindled down to a trio and made a full transition into hip-hop music. Adam “MCA” Yauch, Michael “Mike D” Diamond, and Adam “Ad-Rock” Horovitz went on to release a string of successful singles, becoming the first white rap group to achieve any sort of importance.

After touring with Madonna throughout 1985, the group released their debut album License to Ill, which has become a record-breaking success. License to Ill is the first rap LP to top the Billboard album chart and is one of Columbia Record’s fastest-selling debut records to date. The album was certified Diamond by the RIAA in 2015 after shipping over ten million copes in the US alone.

The Beastie Boys continued to tour and record music for over 30 years following the albums release until 2012, when founding member Adam “MCA” Yauch lost his battle with cancer. After a two-year hiatus, Diamond and Horovitz confirmed they would continue as the Beastie Boys in 2014. Over the course of their career, the Beastie Boys have released a total of eight full-length albums, with seven of them achieving platinum-selling status between 1986 and 2004. They have sold over 50 million records worldwide, making them the biggest-selling rap group since Billboard began recording sales in 1991. The Beastie Boys became the third rap group to be inducted into the Rock and Roll Hall of Fame in 2012, just before Yauch succumbed to his illness. 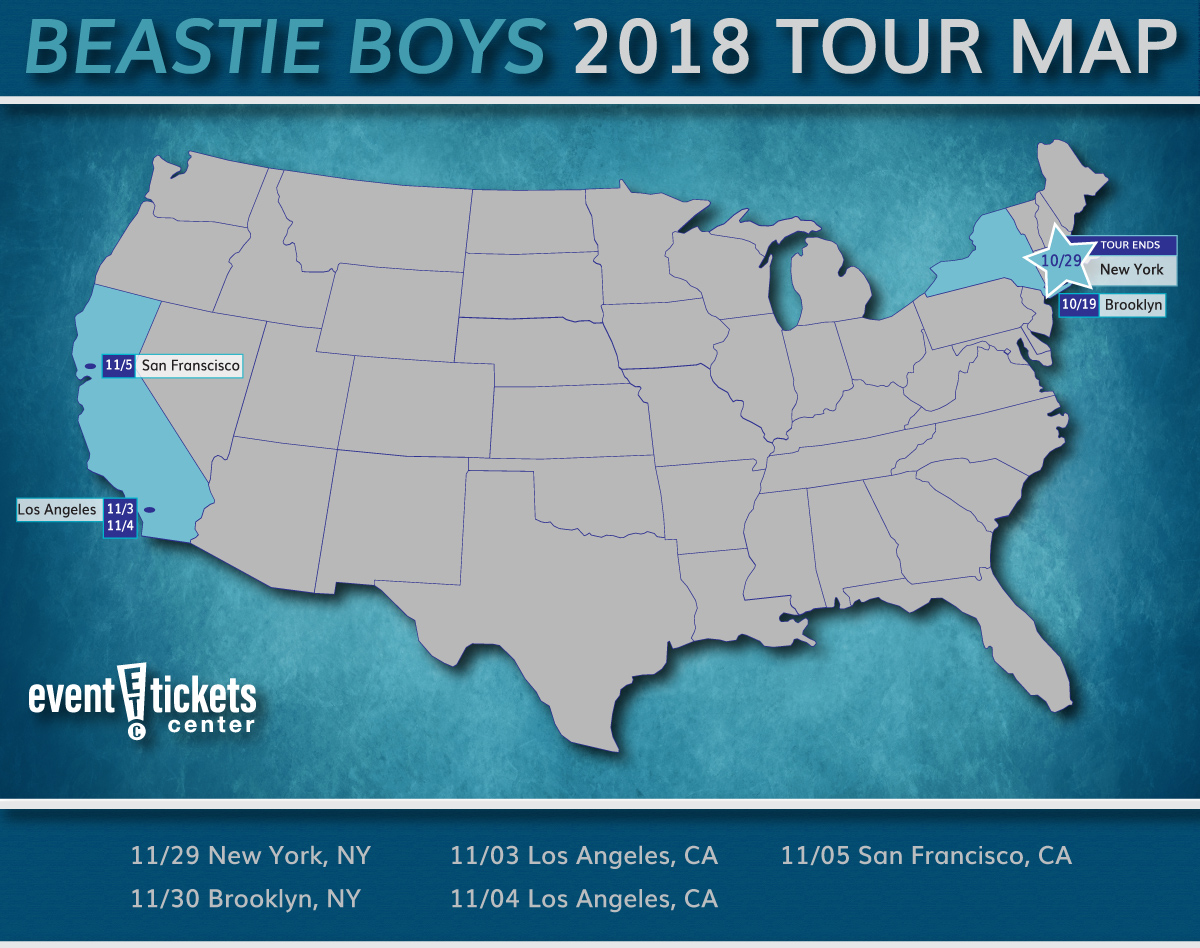 Where is the Beastie Boys Book Tour coming near me?