UPDATE 10/16/2018: Marc Anthony has just announced a new string of dates on his blockbuster 'Legacy Tour!' The new dates for 2019 will begin January 24 at the Honda Center in Anaheim, CA. The tour will then criss-cross the United States, hitting cities like Orlando, San Diego, Dallas, Newark and DC, before a final show at Uniondale, NY's Nassau Coliseum on February 23. We expect more dates to be announced in the coming months, so stay tuned to Event Tickets Center for updates!

Latin superstar Marc Anthony has shared an all new string of dates for his upcoming “Legacy Tour”!

The tour will kick off on October 24 with a show in Boston, Massachusetts. Anthony will go on to play in cities including New York, San Antonio and Miami before wrapping the U.S. leg with a December 2 performance in Los Angeles. Following the string of U.S. dates, he will give one final performance in Puerto Rico on December 14.

Although Anthony has yet to put out an album since 2013, we can only hope that new music will be released sometime soon!

Who Is Marc Anthony?

Marco Antonio Muñiz began his music career as a session vocalist for freestyle and underground house music acts in New York. He worked as a songwriter and backing vocalist for pop acts including Menudo and the Latin Rascals. Anthony’s first album, Rebel, was a freestyle music record that was released in 1988. Following a few years of collaborations and writing freestyle music, he changed his style to salsa and other Latin styles of music, leaving his freestyle days behind him in 1992.

Anthony was initially reluctant to become a salsa musician, declining an offer to make a salsa album when the president of RMM Records approached him with the idea. His mind was changed, however, when he heard Juan Gabriel’s hit song “Hasta Que Te Conocí,” influencing him record the tune as a salsa track. He released his Spanish-language debut, Otra Nota, in 1993.

His 1995 follow up, Todo a su tiempo, earned Anthony a Billboard Award for Hot Tropical Artist of the year. The album also received a Grammy nomination, and sold more than 800,000 copies. Todo a su tiempo has achieved gold status in both the U.S. and Puerto Rico. His next Spanish-language album, Contra La Coriente, produced the hit single “Y Hubo Alguien,” which went on to become Anthony’s first number one single on the Billboard Hot Latin Tracks, and the first by a salsa musician. The album was also the first album to enter the English-language Billboard 200 chart.

Otra Nota, Todo a Su Tiempo, and Contra La Corriente established Anthony as the top-selling singer in the history of the genre, able to sell out Madison Square Garden and other prestigious venues internationally.

Following the crossover wave of Enrique Iglesias and Ricky Martin, Anthony released an English-language self-titled album in 1999. The album produced hit singles such as “I Need to Know,” and “You Sang To Me,” which was featured in the feature film Runaway Bride. “I Need to Know” earned Anthony a Grammy nomination for Best Male Pop Vocal Performance. The album was followed by the release of 2001’s salsa album, Libre, which was certified gold, and a second English-language album titled Mended in 2002. His 2004 Latin pop album, Amar Sin Mentiras, won best Latin Pop Album of The Year at the 2005 Latin Grammy Awards.

Anthony was inducted to the Billboard Latin Music Hall of Fame in 2012. He released 3.0 in 2013, a salsa album that included the hit song “Vivir Mi Vida.” The album has been certified platinum since its release.

Anthony has been consistently touring the world over the course of the last few years. His demand for touring is constant. He has also enjoyed a successful acting career, appearing on popular tv shows, feature films and stage musicals since 1995. He is known for his philanthropic work, opening an orphanage in La Romana, Dominican Republic in 2014 amongst other efforts. Anthony was honored as the Person of the Year by the Latin Recording Academy in 2016 for his musical contributions and philanthropic work. 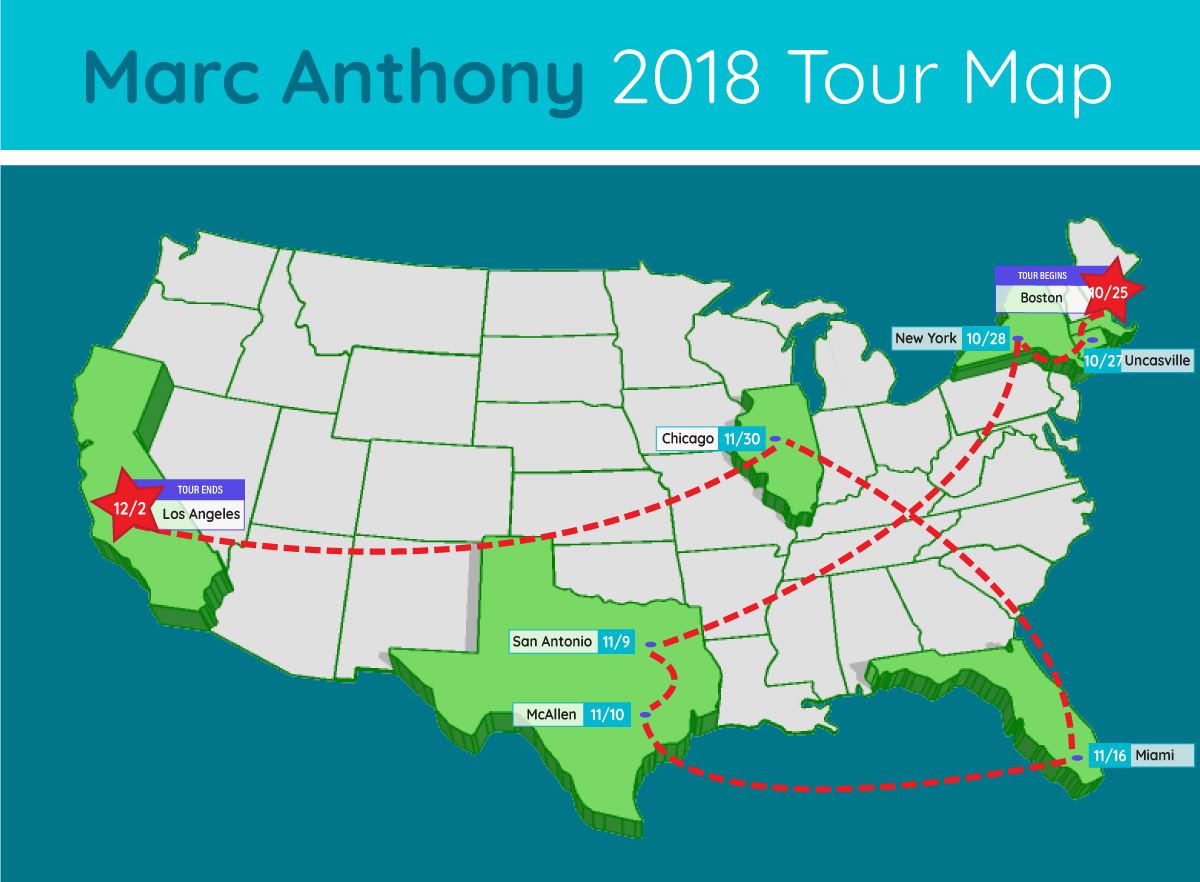 Where is Marc Anthony playing near me?