Besides serving as the home of the Phillies, the open-air ballpark has hosted events like the 2012 NHL Winter Classic game played between the Philadelphia Flyers and the New York Rangers, as well as concerts by Jay-Z and Bruce Springsteen.

Be sure to visit Ashburn Alley—named after the Phillies center fielder and commentator Richie Ashburn—which is located behind center field. The alley holds plaques and statues commemorating notable figures in Phillies history. The ballpark also features rooftop bleachers, a nod to the similar seating in now-demolished Shibe Park during the 1920s and ’30s. Home games on Thursdays traditionally see specials and events in this bleacher area.

The park has distinguished itself in the concessions department: PETA voted it the most vegetarian-friendly stadium, and stands offer classic Philadelphia street food like cheesesteaks and hoagies. It’s located in South Philadelphia, a diverse borough where Italian, Irish and African-American communities have flourished over the years. The neighborhood today is made up mostly of Italian-Americans and hosts several Catholic saint festivals and other cultural events throughout the year. For those driving from downtown Philadelphia, the stadium is near the junction of Interstates 76 and 95. Parking is available onsite and throughout the complex. 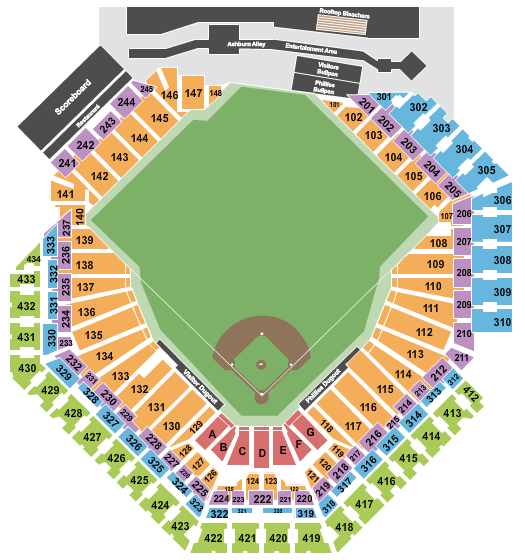 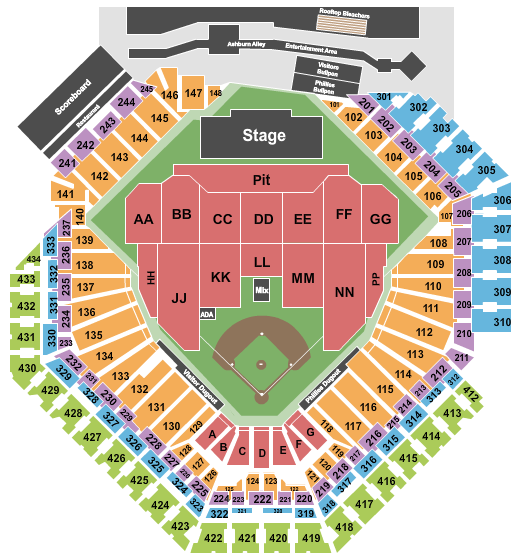 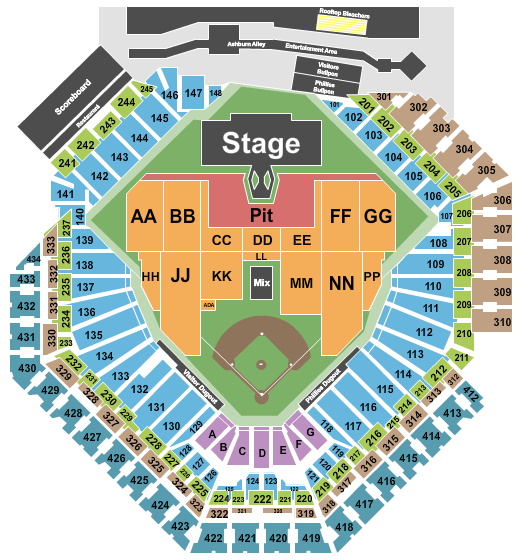 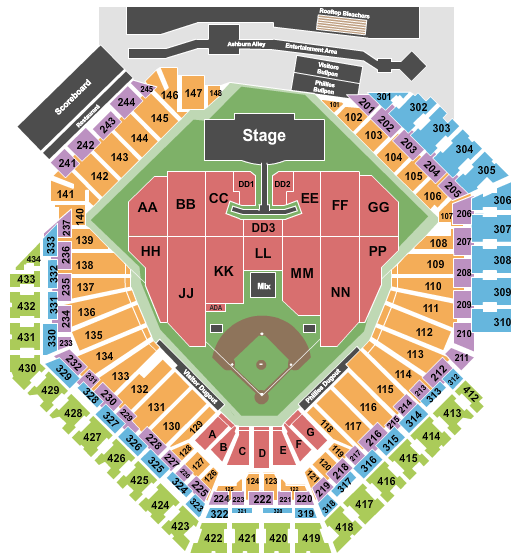 Q: What time do doors open at Citizens Bank Park?

A: Doors typically open anywhere between 90 minutes to 2 hours prior to showtime at Citizens Bank Park. Be sure to check the listing on your ticket as showtimes will vary.

A: The Philadelphia Phillies are the home team at the Citizens Bank Park.

A: When looking at seating charts for sports events, seats are arranged so that the lower numbered seats within a section are located closer to the preceding section. For example; if a venue shows three sections (A, B, and C), seat #1 in section B will be located next to section A. As the seat numbers progress within section B, they move closer to section C. Citizens Bank Park, a venue designed to host sports games, may be set up in a similar fashion. While concerts and other events held at Citizens Bank Park may not follow this layout, most sports events happening at Citizens Bank Park will follow this configuration. Concert seating is typically laid out so that the higher the seat number, the further you are from the stage/performance area. If you’re seeing a concert at Citizens Bank Park, it’s likely that the seats closest to the stage will have low seat numbers and low section numbers.


Q: Where is the Philadelphia Phillies Sideline at Citizens Bank Park?