Travis Scott Announces the ‘Astroworld: Wish You Were Here’ Tour

Travis Scott is gearing up for a massive world tour in support of his recently released album, Astroworld.

“I’ve been ready to get back on the road for a long time,” Scott said in a post to social media. “Astroworld tour is finally here!!”

For now, dates only include festival stops around the U.S. and Europe. Additional tour dates and venue information will be dropping soon, so stay tuned for all the updates!

Travis Scott has shared a slew of cities he will be hitting on his upcoming 'Astroworld' tour, with more to be announced!

The highly anticipated Astroworld tour will launch November 8 with a show in Baltimore, MD. From there, the “Sicko Mode” rapper will travel to cities including Miami, Louisville, Philadelphia, Detroit, Milwaukee and Denver.

As of right now, the final show is slotted for December 19 in Los Angeles. However, Scott shared via social media that more shows will be added to the lineup soon.

Check back here for all the updates and secure your ticket to 'Astroworld' here at Event Tickets Center!

News of the tour follows another announcement from the “Antidote” rapper, who also just shared plans to launch and host the Astroworld Festival in Houston. Astroworld is named after Houston’s shut-down Six Flags, and he plans to bring the park’s spirit back to life with the one-day show at Houston’s NRG Park on November 17.

Who Is Travis Scott?

Houston-born hip-hop artist Travis Scott made his mainstream breakthrough working as a producer with Kanye West’s GOOD Music label in 2012. Scott made a name for himself as an established artist in the hip-hop industry as a guest vocalist and producer on several hit tracks from the label before releasing any of his own music. His debut album Rodeo dropped in 2015, catapulting his career into stardom and yielding massive hit singles “3500” and “Antidote.” Scott went on to release Birds in the Trap Sing McKnight (2016), and Huncho Jack, Jack Huncho (2017), a collaborative album with fellow rap artist Quavo before dropping Astroworld, his most successful release to date. Within a week, Astroworld was certified gold by the RIAA. Scott’s promotion of the album has garnered widespread attention, as the artist continues to surprise fans around the world. Whether its announcing a tour, a new festival, or giving away $100,000 in celebration of the albums successful release, Scott shows no signs of slowing down anytime soon and fans are eager to see what he’ll do next. 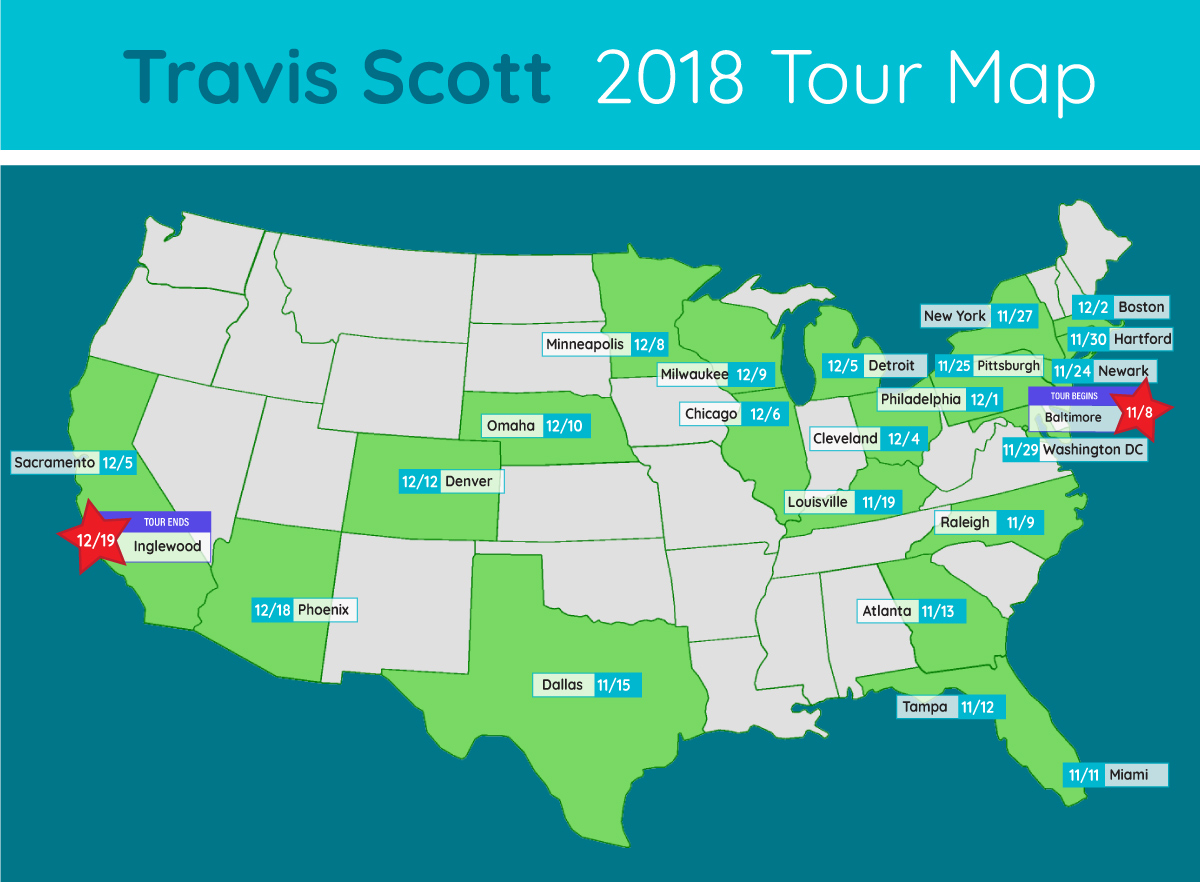 Where is Travis Scott playing near me? Stay tuned to ETC as more details emerge!