UPDATE 9/12/2018: Many more dates have been added! Check below to see the updated schedule!

The beloved holiday extravaganza is set to make its way to stages across the U.S. for the 20th consecutive year this winter! “The Ghosts of Christmas Eve” will greet audiences in Green Bay, WI and Council Bluffs, IA on November 14 before setting out on a massive trek that will hit cities like Denver, Phoenix, Indianapolis, Charlotte, Jacksonville, and Pittsburgh. Final performances in Cleveland, OH and Milwaukee, WI on December 30 will close out the tour, which covers a remarkable total of 65 cities over 34 dates.

The 2018 run of shows will be the second tour without TSO's founder Paul O’Neil, who passed away in April 2017.

"It’s hard to believe that 20 years ago, we had just seven shows," TSO’s music director and lead guitarist Al Pitrelli shared in a recent interview. "We were so happy that 10 to 11 thousand people came out to those shows and fell in love with Paul’s creation. Last year, with Paul’s family steering the ship, we realized that his dream will live beyond him, and that makes us all very proud, happy and thankful."

Fans can expect an all-new production and new songs from the band this year, casting a new spin on the show that has become a tradition for fans across the nation. This year’s production will be a representation of “The Ghosts of Christmas Eve,” a 1999 made-for-TV-movie written by O’Neil that showcased Christmas music performed by the TSO.

In celebration of the tour’s 20th anniversary, TSO will also be releasing a special edition of their 1998 album The Christmas Attic on September 28. The album will feature a bonus track (“Christmas Jam [Live]”), which was previously unreleased.

"There are a lot of people who come back year after year, and they expect to see the stories they’ve grown so attached to, and, not to disappoint them, we keep the familiarity intact," Pitrelli said. "But, those same people in the audience know that there are always going to be a lot of surprises. This year is no different. We as a band and production are forever pushing the envelope both musically and visually, (and) this tour is going to be epic."

What Is the Trans-Siberian Orchestra?

Symphonic-metal ensemble Trans-Siberian Orchestra took the world of Christmas music by storm in 1996. Established by the late producer, composer and lyricist Paul O’Neil, TSO put a new spin on traditional holiday favorites with a sound that is heavily influenced by bands like Pink Floyd, Yes, The Who and Led Zeppelin. Their rise to fame was unusually fitting as they were the first major rock band to go straight to performing in theaters and arenas, skipping over the club/bar/opening act phase many other bands enter before making it big. Known for their elaborate live performances, audiences at any TSO concert are immersed in a multi-sensory experience that features an incredible light show display with lasers and pyrotechnics. TSO has played over 1,850 shows for more than 15 million fans since making their historic touring debut in 1998, cementing its status as a multi-generational holiday tradition for fans across the nation. 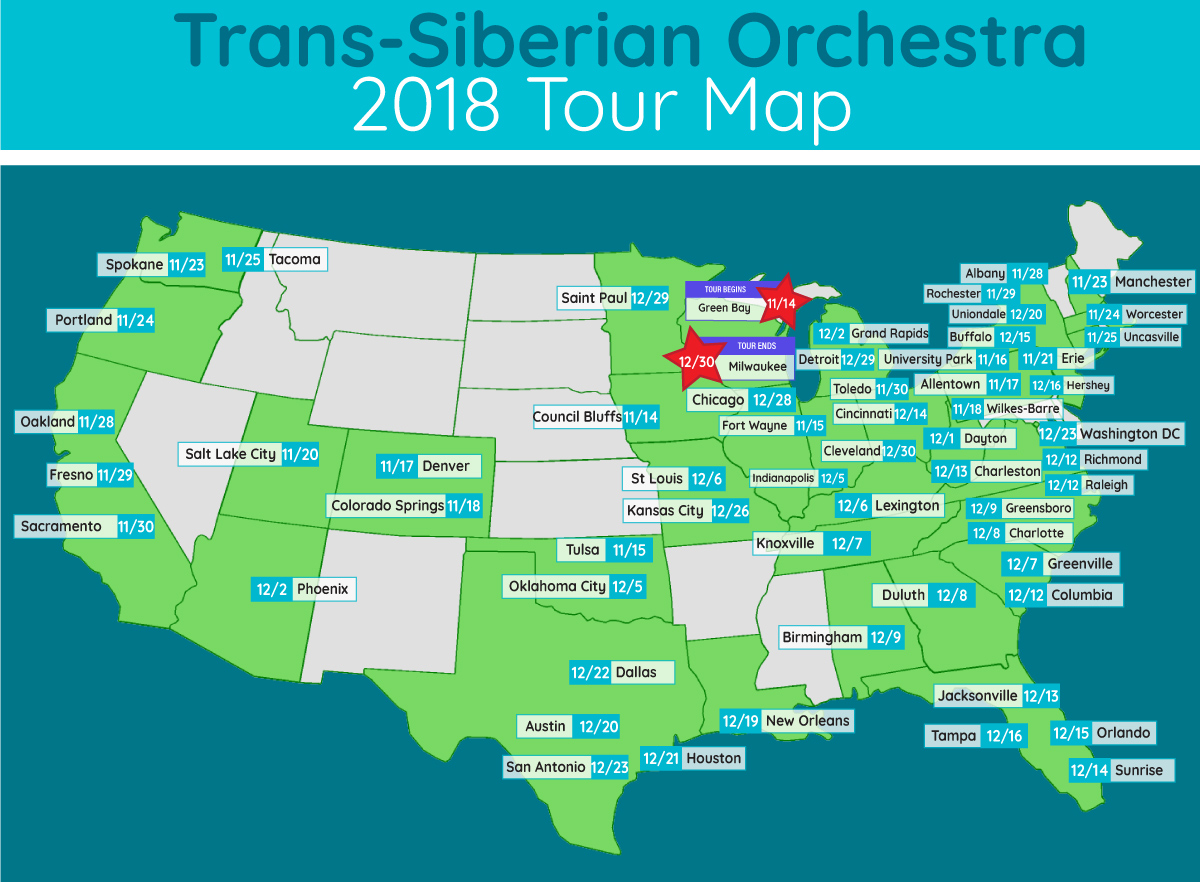 Where is Trans-Siberian Orchestra playing near me?