Tommy Emmanuel has announced a new string of dates being added to this fall’s “Tommy Emmanuel with Very Special Guest Jerry Douglas” tour!

The 17-date tour is set to launch with a November 29 performance in Salina, Kansas. From there, the two guitar greats will play in cities including Charlotte, Portland, Beverly Hills, and Tucson before wrapping the tour with a final show in Dallas on December 19.

Both Emmanuel and Douglas have recently released new studio albums, both of which garnered universal praise. The upcoming tour promises to deliver fans over two hours of “precision-crafted” roots music, bringing the guitar icons together for a set of shows that is sure to be unforgettable.

Who Is Tommy Emmanuel?

Tommy Emmanuel is an Australian guitarist, songwriter, and singer who is best known for his complex fingerstyle technique of playing the guitar. He received his first guitar at the young age of four years old, where he learned from his mother to accompany her playing lap steel guitar. At age six he heard Chet Atkins on the radio and was greatly inspired by his playing. He began working as a professional musician and shortly after, his father formed a family band with Tommy and his brother Phil. He spent his childhood touring Australia and playing rhythm guitar, rarely attending school.

Following the death of his father in 1966, Emmanuel moved to Sydney where he was noticed nationally for winning a string of talent contests as a teenager. By the late 1970s, he began to play drums with his brother in a group called Goldrush and contributed to numerous albums and singles. He gained more popularity after joining The Southern Star Band as their lead guitarist. In the 1980’s he joined the reformed lineup of rock group Dragon, whom he toured extensively with, including a 1987 tour with Tina Turner before leaving the band to embark on a solo career.

Emmanuel has enjoyed a successful career spanning over five decades. He has released a total of 27 albums, including his latest, Accomplice One, which dropped in January 2018. Accomplice One features duets with artists including Jason Isbell, Mark Knopfler, Rodney Crowell, Amanda Shires and Jerry Douglas. The album has received positive reviews from music critics, with Rolling Stone stating it “unites the talents of Emmanuel with those dream guests… for an engaging set of originals and innovative covers.” 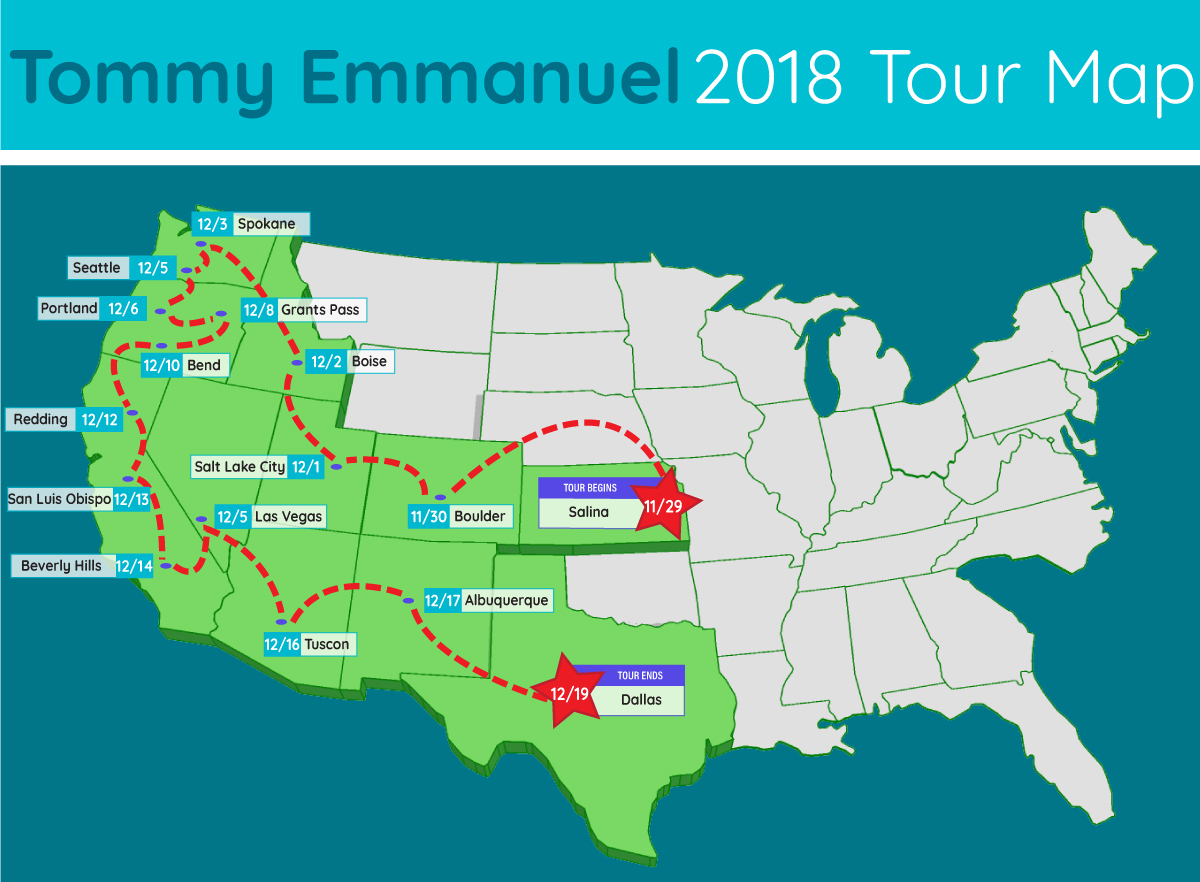 Where is Tommy Emmanuel playing near me?