Following the massive success of his 2018 run, TobyMac will take the “HITS DEEP Tour” into the new year, bringing the Christian music superstar to a stage near you in 2019!

The 34-date trek gets underway January 29 with a show in Alexandria, LA before making stops in a slew of cities across the US including Nashville, Jacksonville, Toledo, Grand Prairie, and Pittsburgh, wrapping up with a final performance in Jonesboro, AR on April 7.

The “HITS DEEP” 2019 run will feature the seven-time Grammy winner performing tracks off his upcoming album, The Elements, which is due for release on October 12. The album marks his first release in three years since 2015’s This Is Not a Test, and boasts his biggest single in six years, “I just need U.”, along with current radio hit “Everything.”

In 2018, the “HITS DEEP Tour” sold out 18 arenas and drew a crowd of 11,000 fans to Portland’s Moda Center alone. It was noted as the highest-grossing Christian tour of the year.

The 2019 "HITS DEEP Tour" comes on the heels of his “TobyMac & DiverseCity Band: The Theater Tour” which we covered back in July and wraps up on November 18. TobyMac will be joined on the road by special guests Jeremy Camp, Jordan Feliz, Ryan Stevenson, We are Messengers and Aaron Cole.

Christian hip-hop sensation TobyMac first rose to prominence as a member of the Christian vocal trio DC Talk. Staying with the group from 1987 until their hiatus in 2001, TobyMac embarked on a solo career and hasn’t looked back since. He has released six studio albums to date, including 2012’s Eye On IT, which became the third Christian album of all time to have a number one debut on the Billboard 200 chart. Between the success of his time as part of DC Talk and as a solo artist, TobyMac has sold more than 10 million albums. He’s had a total of six number one contemporary hit radio singles, including “Gone,” “Made to Love,” and “Lose My Soul,” taking home a total of seven Grammy Awards. Several of TobyMac’s songs have been prominently featured in television shows, promotions, and Hollywood films. He has released a handful of remix albums over the years, and is also a published author of five books. 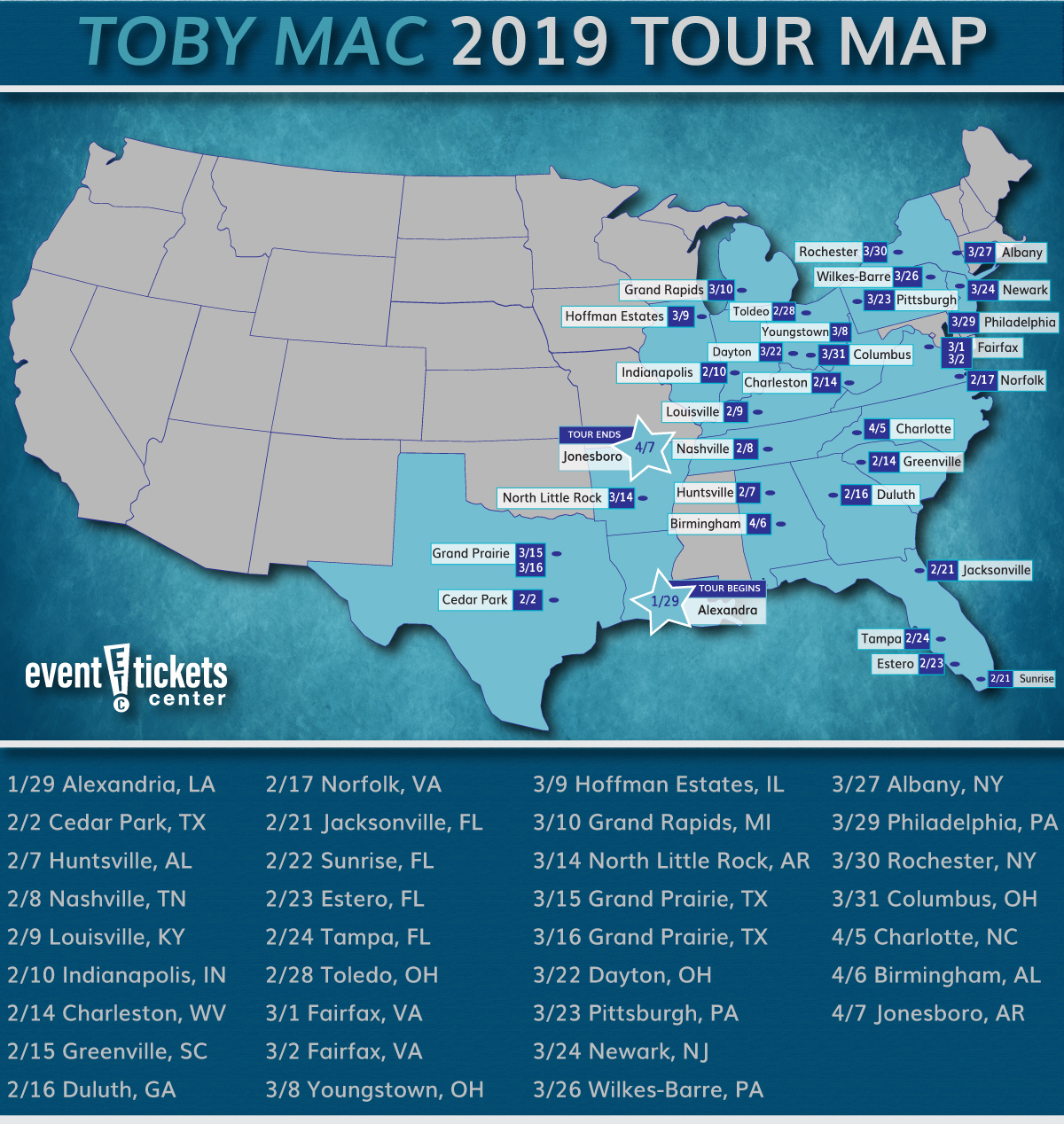 Where is TobyMac playing near me?