The Rolling Stones have announced an all-new tour for 2019, bringing the legendary rock stars to stadiums across the US starting next spring!

The “No Filter Tour” kicks off April 20 at Hard Rock Stadium in Miami Gardens, FL and will make stops in cities including Houston, Seattle, Denver, Washington DC, and Philadelphia. A final show at Chicago's Soldier Field will wrap things up on June 21st.

News of the tour follows weeks of speculation and teaser announcements from the Rock and Roll Hall of Famers, who have been touring each year since 2012. The initial announcement includes 13 dates, but with several days separating each tour date it’s likely more shows will be added to the lineup in the future.

“It’s a thrill when we play stadiums in the States,” Stones frontman Mick Jagger shared in a statement. “The energy is always amazing!”

“No Filter” will mark the group’s first extended run of shows in the US since the “Zip Code Tour” in 2015. Over the past two years, the band has only gigged in Europe (except for Desert Trip in Indo, CA and two Las Vegas arena gigs). Unlike their marathon tours of the past, the Stones only did 14 shows in 2017 and another 14 this year.

Mick, Keith, Charlie, and Ronnie typically center their performances around mega-hits like “Satisfaction,” “Gimme Shelter,” and “Sympathy For The Devil.” This go-around, though, fans can expect to hear some other favorites sprinkled throughout the set list, like “Play With Fire,” “Out of Control,” “Doo Doo Doo Doo Doo (Heartbreaker)," and “Neighbors.”

Who Are the Rolling Stones?

Rooted in blues and rock and roll, the Rolling Stones were at the forefront of the British invasion of bands that took over the United States in 1964. The Stones are considered pioneers of the gritty, hard-driven, blues-based style that came to define hard rock. Following a short period of experimentation with psychedelic rock in the early ‘60s, the group returned to their “bluesy” roots with the release of Beggars Banquet in 1968. The album, along with its follow-ups Let It Bleed (1969), Sticky Fingers (1971), and Exile on Main St. (1972), is considered their best work and is referred to as their “Golden Age.”

The Rolling Stones continued to release commercially successful albums through the ‘70s and ‘80s, including the two best-sellers in their catalog Some Girls (1978) and Tattoo You (1981). Over the course of their nearly six decade-long career, the group has released 30 studio albums, 23 live albums, and several compilations. They are considered one of the greatest music acts of all time, with estimated record sales of over 250 million worldwide.

Despite several feuds and line up changes over the years, the Stones remain at the forefront of rock and roll music. Since 1975, the lineup has consisted of founding members Mick Jagger and Keith Richards along with Charlie Watts and Ronnie Wood. They were inducted to the Rock and Roll Hall of Fame in 1989, and the UK Music Hall of Fame in 2004. 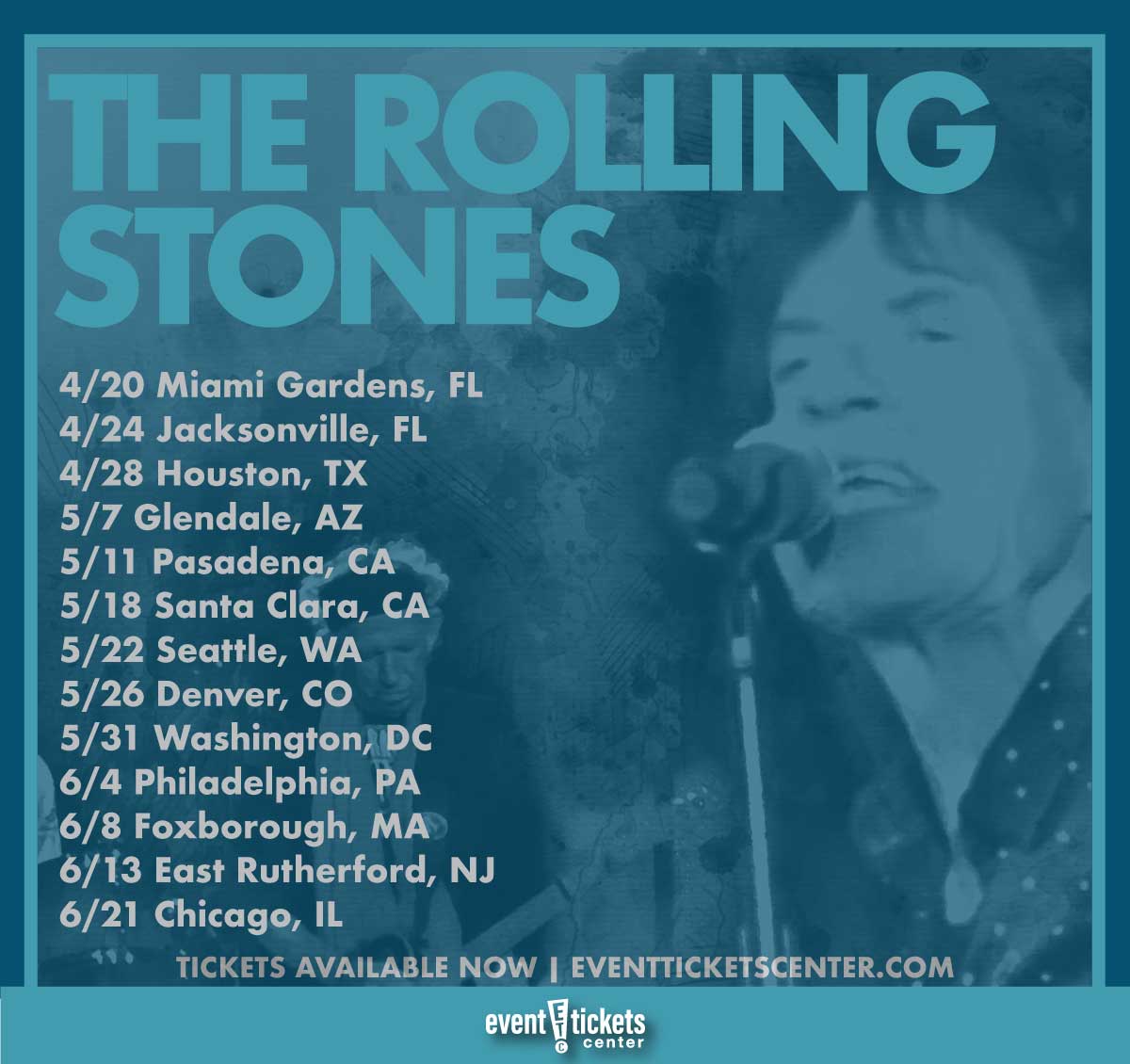 Where are The Rolling Stones playing near me?