The Smashing Pumpkins Celebrate 30 Years With a 2018 Summer Tour

UPDATE 10/1/2018: The Smashing Pumpkins have announced a series of fall dates immediately following their previously announced summer dates. The new stops will begin November 28th in Madison, WI. From there, the Pumpkins will hit cities like Chicago, Tulsa, St. Louis and San Antonio, before a finale in Phoenix, AZ on December 7th.

The tour will coincide with the Pumpkins official 30th anniversary, and the release of their upcoming album, Shiny and Oh So Bright, Vol. 1 / LP: No Past. No Future.

The original band parted ways in 2000, but has continued to produce records and has toured with different lineup variations since. Lead singer Billy Corgan has been the catalyst and frontman for all concerts.

The 36-city summer tour will kick off at the Gila River Arena in Glendale, AZ on July 12th, 2018, and wrap in Nampa, ID at the Arena At Ford Idaho Center. The lineup will feature three-fourths of the founding members: singer Billy Corgan, drummer Jimmy Chamberlin, and guitarist James Iha.

After opening in Arizona, the tour heads to Texas for shows in Houston and Dallas. Additional July stops include Nashville, Louisville, Atlanta, Miami, Tampa, Baltimore, Philadelphia, Uncasville, and Boston.

Who Are The Smashing Pumpkins?

The Smashing Pumpkins burst onto the alternative rock scene in 1993 with their second album, Siamese Dream. The group toured extensively while building up a strong following and their follow-up double album Mellon Collie and the Infinite Sadness debuted at number one on the Billboard 200 chart. The Smashing Pumpkins is one of the most commercially successful bands of the 1990s and has sold over 20 million records.

"Some 30 years ago, as The Smashing Pumpkins, James Iha and I began a musical journey in the cramped rear bedroom of my father's house. And so it's magic to me that we're able to coalesce once more around the incredible Jimmy Chamberlin, to celebrate those songs we've made together," shared Corgan. 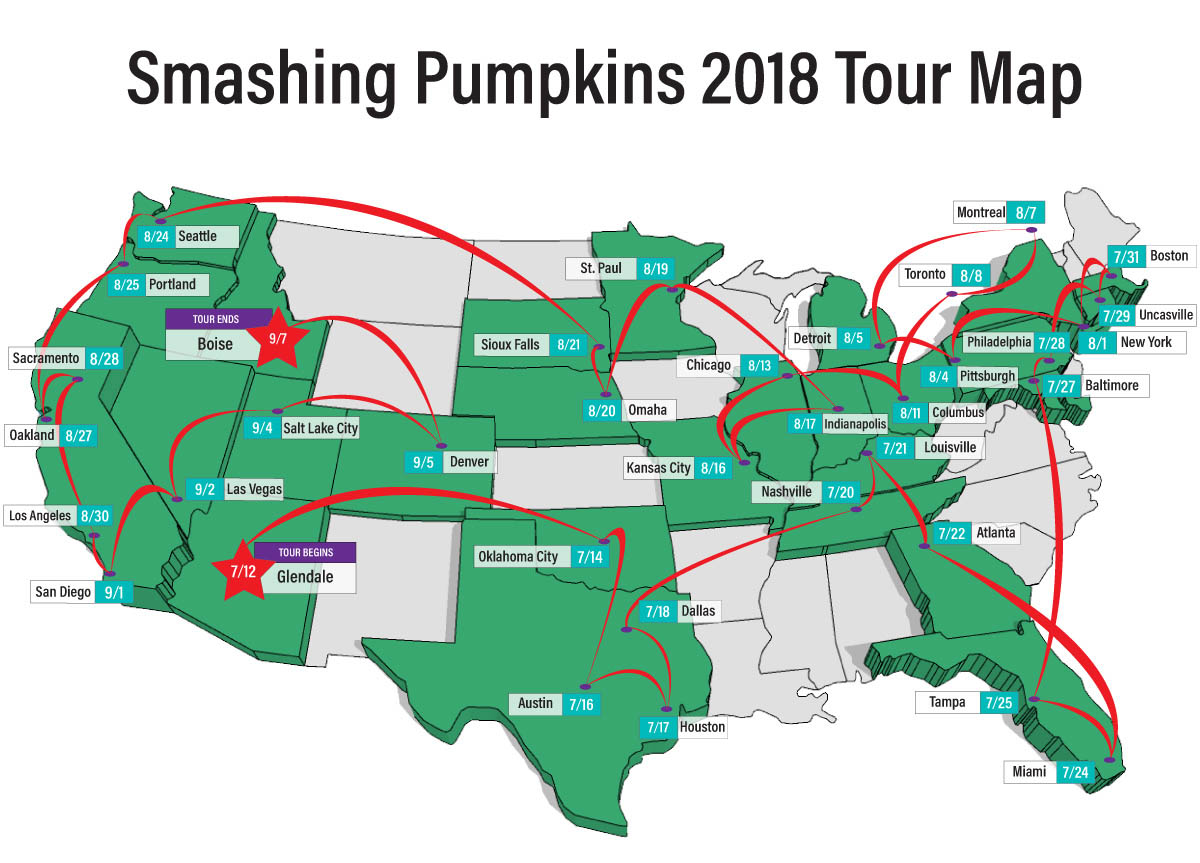 Where Are The Smashing Pumpkins playing near me?