Slayer has just shared news of yet another North American leg being tacked on to their final world tour!

The metal rockers will kick off leg five at the Ak-Chin Pavilion in Phoenix on May 2 before setting out to hit a slew of cities including Huntington, Tampa, Columbia, and Clarkston. A final show in Mansfield, MA will wrap up the 16-date trek on May 25.

Fellow metal acts Lamb of God, Amon Amarth, and Cannibal Corpse are set to join Slayer as supporting acts on all dates.

The band announced in January 2018 that they would be embarking on one final concert tour around the world to thank their fans for their support over the last three-and-a-half decades. Scroll down to read more about Slayer’s farewell tour and view a full schedule of upcoming dates and venues below!

You read that right – Slayer has announced they will be extending their Final World Tour, adding more dates in the U.S. to the lineup!

After just wrapping up their final North American date of their farewell tour, the metal rockers decided they’ve still got quite a bit more to share with fans before stepping off the stage for good.

"We've heard about fans who have driven five, six hours, or flown in from other cities or countries to see us,” Slayer’s guitarist and songwriter Kerry King shared in a press release. “So, we want to assure our fans that we'll be on the road through 2019 and will get to as many places around the world as possible to make it easier for everyone to come and see us one last time."

The band currently has dates set for South America, Australia, France and Japan through the New Year. Dates and venues for extended U.S. shows have yet to drop but keep checking back here at Event Tickets Center for any updates!

"I just want to take the time out to say thank you to all our fans who have made this first part of this tour phenomenal," said vocalist/bassist Tom Araya.

"You really are loyal and dedicated fans and we appreciate that so much from you. We still have quite a few places to play, so next year, keep your eyes and ears open so you can catch us live one last and final time. Again, thank you!"

From Huntington Park, California comes the metal/punk hybrid rock group Slayer. Established in 1981, the band’s fast paced and aggressive musical style made them one of the founding “big four” bands of the thrash metal genre, ranking them alongside bands like Metallica, Megadeth and Anthrax. With a career spanning nearly four decades, Slayer has released a total of 12 studio albums, received four gold certifications and taken home two Gammy Awards. Despite the sensitive nature and dark themes of their music, Slayer’s sound has been cited as a major influence on several artists throughout the years, including Slipknot, Bullet For My Valentine, Pantera, Lamb of God and System Of A Down. 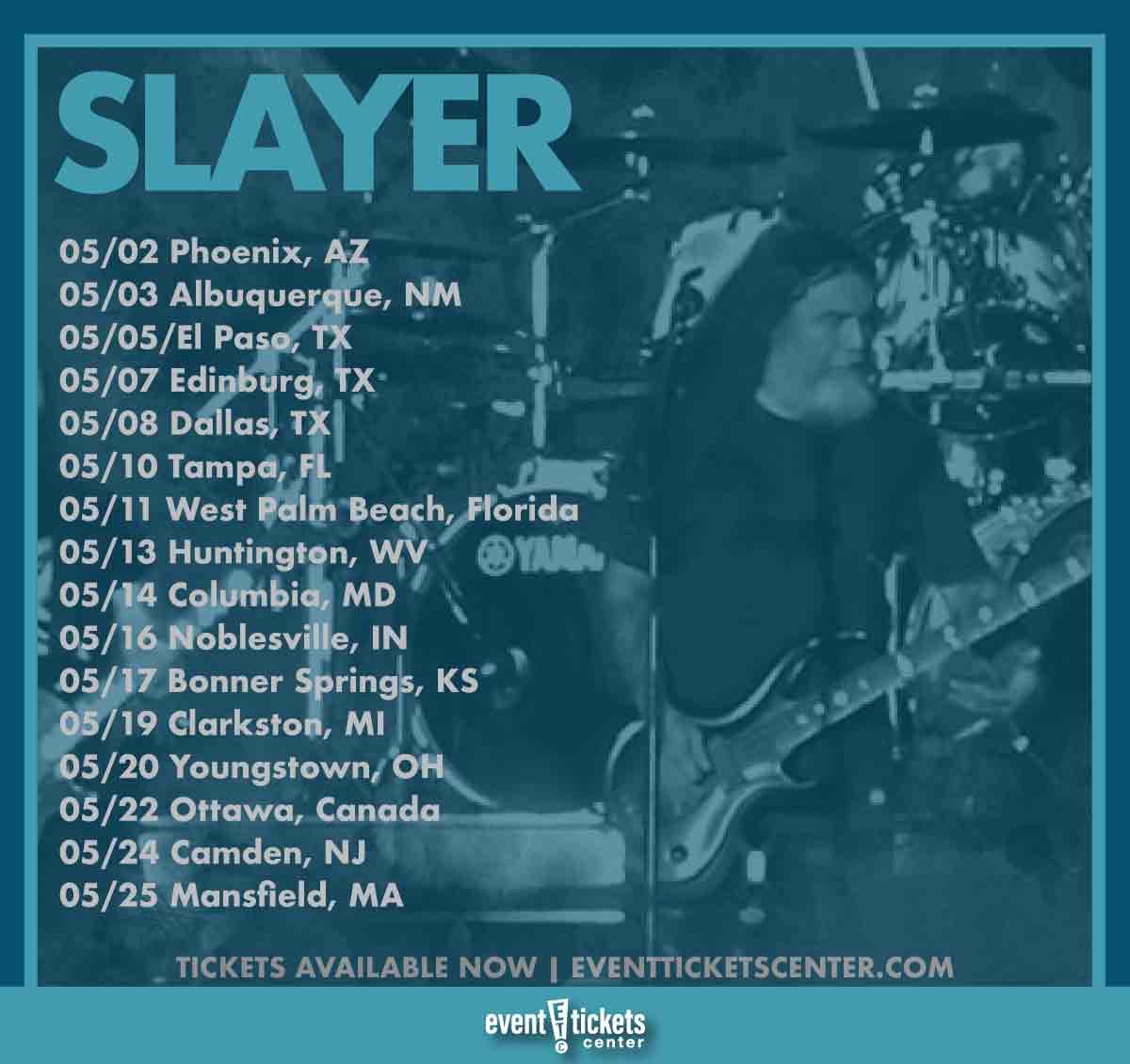 Slayer just finished up their second U.S. tour leg and are headed for Europe. Where is Slayer playing near me? Stay tuned to Event Tickets Center for details as they become available!