Calling all music lovers! Festival season is finally upon is, which means ample opportunity to catch your favorite acts live with mind-blowing production, inspiring art, delicious food, and a positive and inclusive atmosphere. Music festivals aim to celebrate music, oftentimes featuring a diverse lineup of genres, including established artists, emerging artists, reunited groups, and some of the biggest names in music today.

Whether riding solo or forming a squad of your closest friends, you’ll want to take a look at what festivals this season has lined up using our breakdown below. Make note of which fest(s) you can’t miss and prepare for the time of your life! 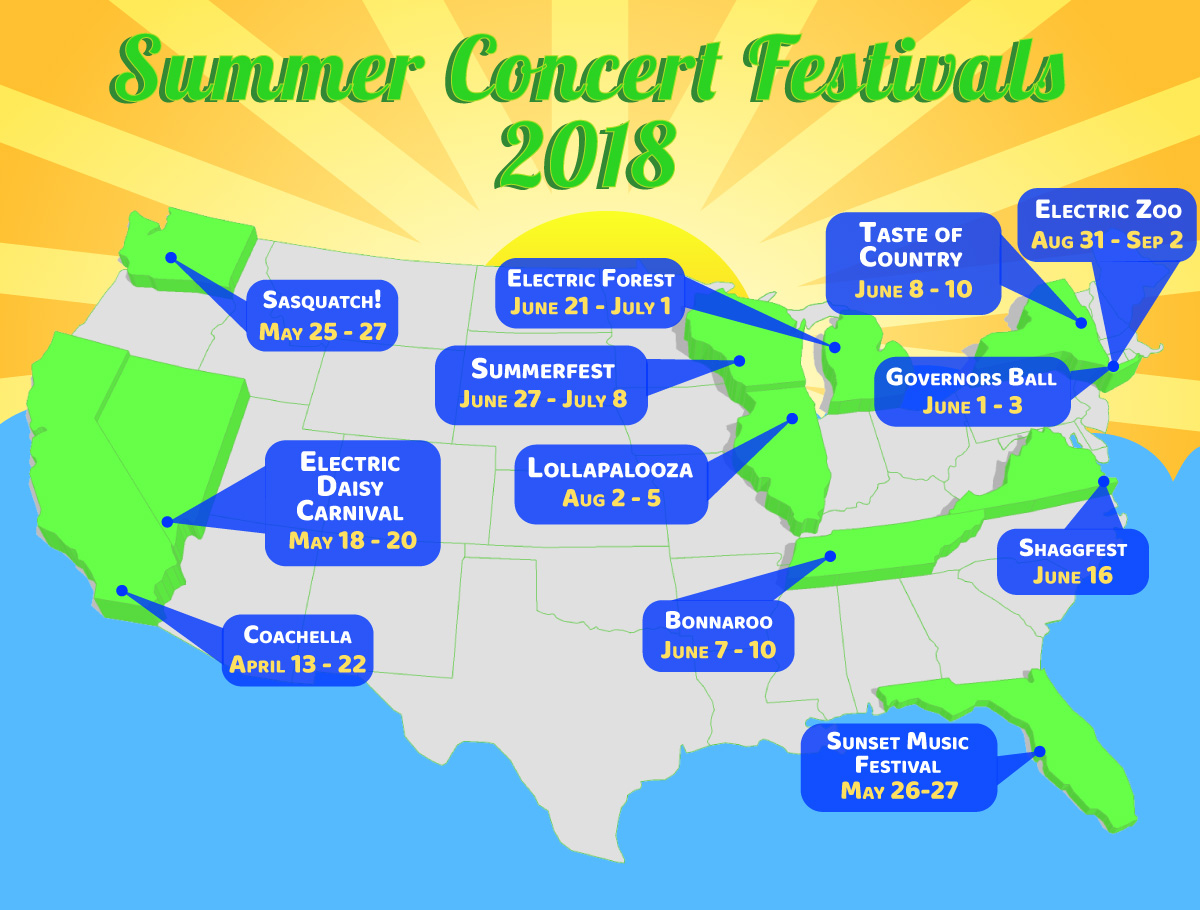 Kicking off festival season is Coachella Valley Music and Arts Festival, one of the largest, most well-known, and most profitable music festivals in the world. Set to the backdrop of the beautiful Coachella Valley in Indio, California, this three-day festival occurs for two consecutive weekends with identical lineups, giving you double the chance to experience the magic of Coachella.

Coachella’s lineup features a diverse range of artists, as exemplified by this year’s headliners: Beyoncé, Eminem and The Weeknd. If you’ve decided Coachella is one festival you can’t miss, we’ve created a convenient insider’s guide for everything you need to know before you enter the valley here. 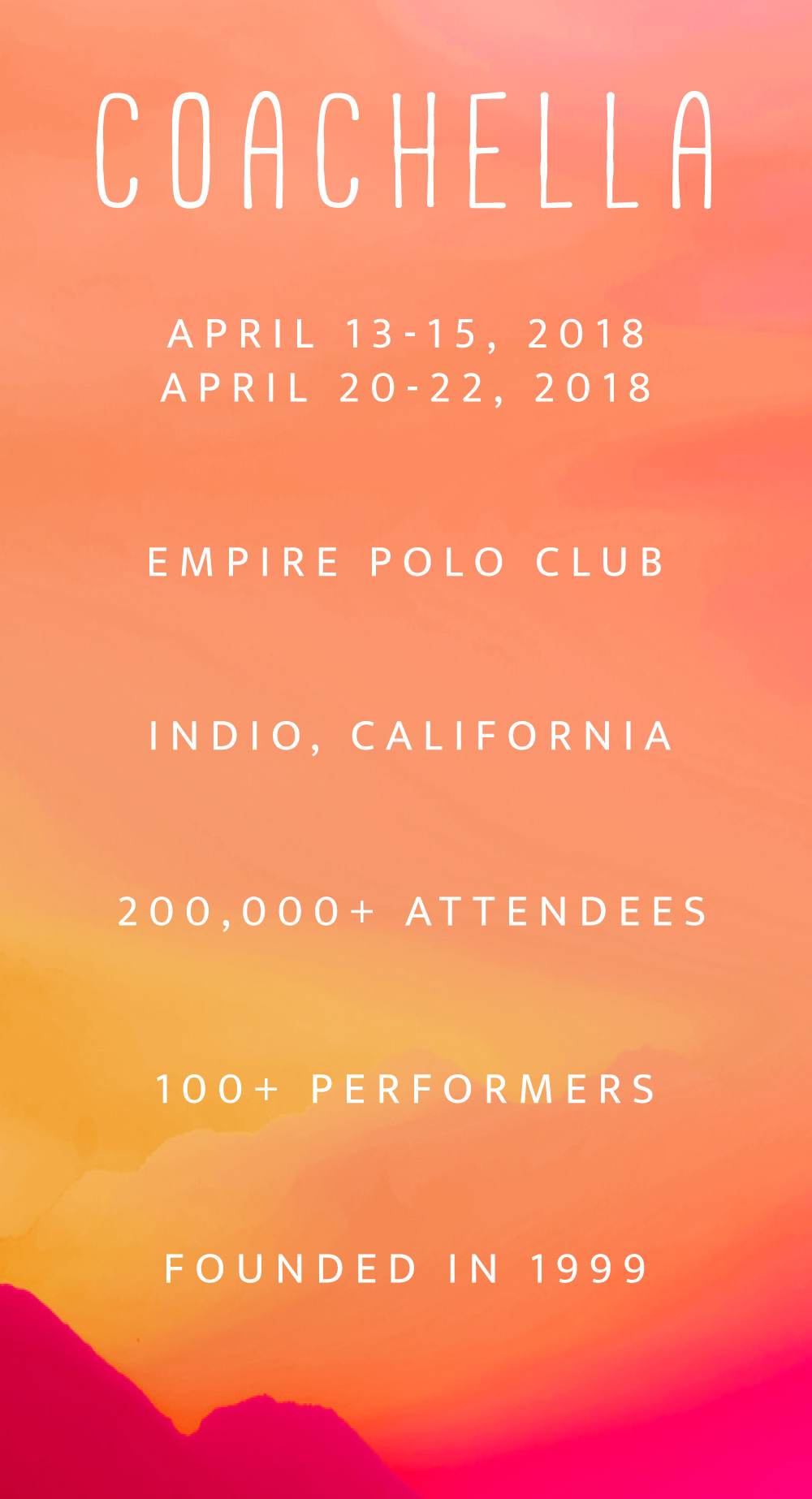 Next up is EDC, one of the biggest electronic dance music festivals in the world based on attendance (over 400,000), with its main event held annually in Las Vegas. EDC boasts nine stages that span the massive Las Vegas Motor Speedway, which for three whole days is transformed into an epic conglomeration of bass, dubs, wubs, and everything in between.

For the first time in its history, EDC will be offering camping options this year, inviting people from all over the world to celebrate life, love, art, and music beneath the Electric Sky. The festival features pyrotechnics, acrobatic performers, carnival rides, and other natural and technological elements that stimulate the senses. 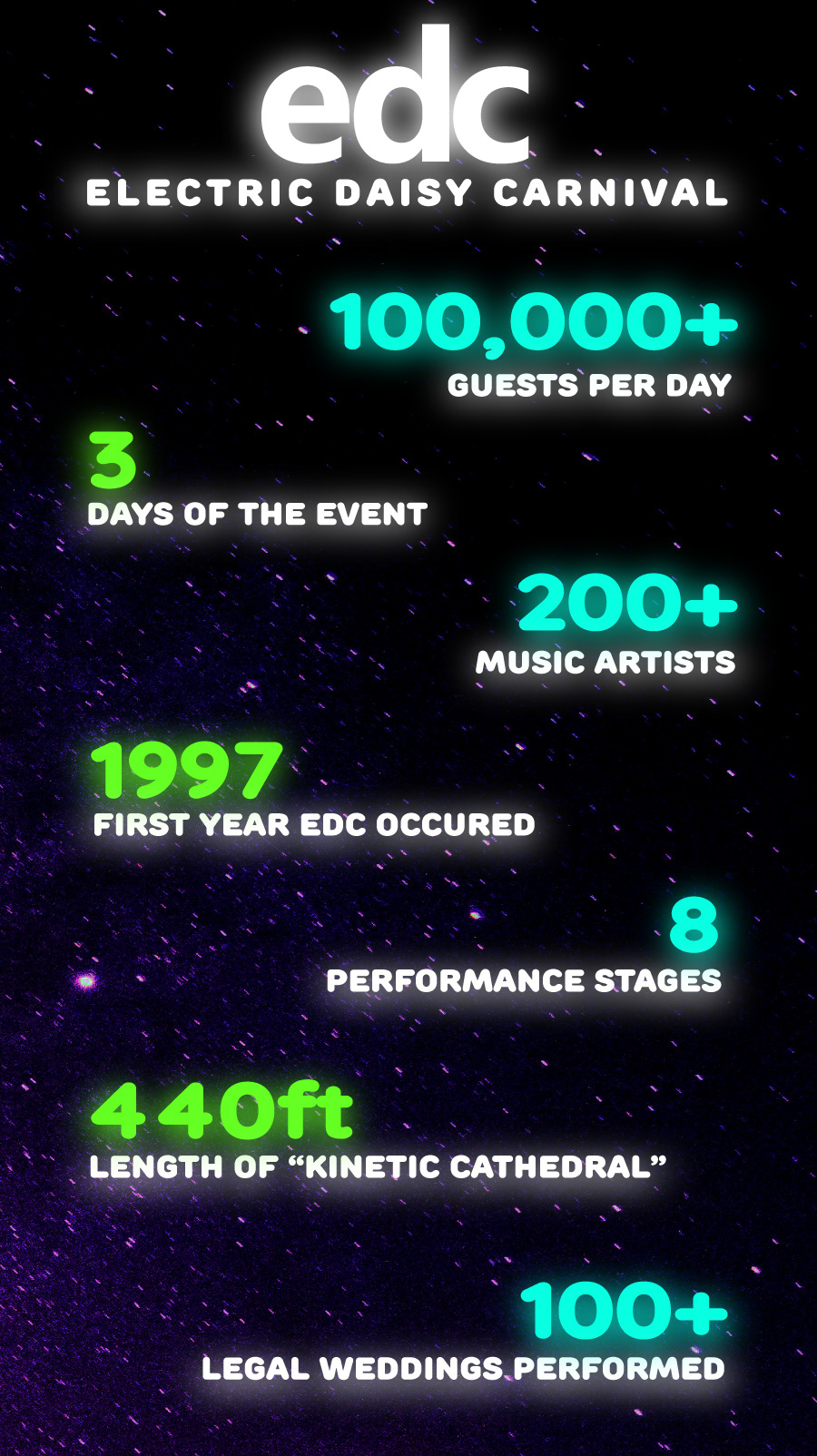 Willie Nelson and Blackbird present Outlaw Music Festival, established just two years ago. This May marks the kickoff of the festivals third year, featuring a lineup packed with music stars like Sturgill Simpson, Nathaniel Rateliff & The Night Sweats, and Willie Nelson himself. Unlike most festivals, Outlaw is styled like a tour, hitting several cities across the country throughout its run. The lineup varies per location, with a full list of dates and acts on the festival’s website. 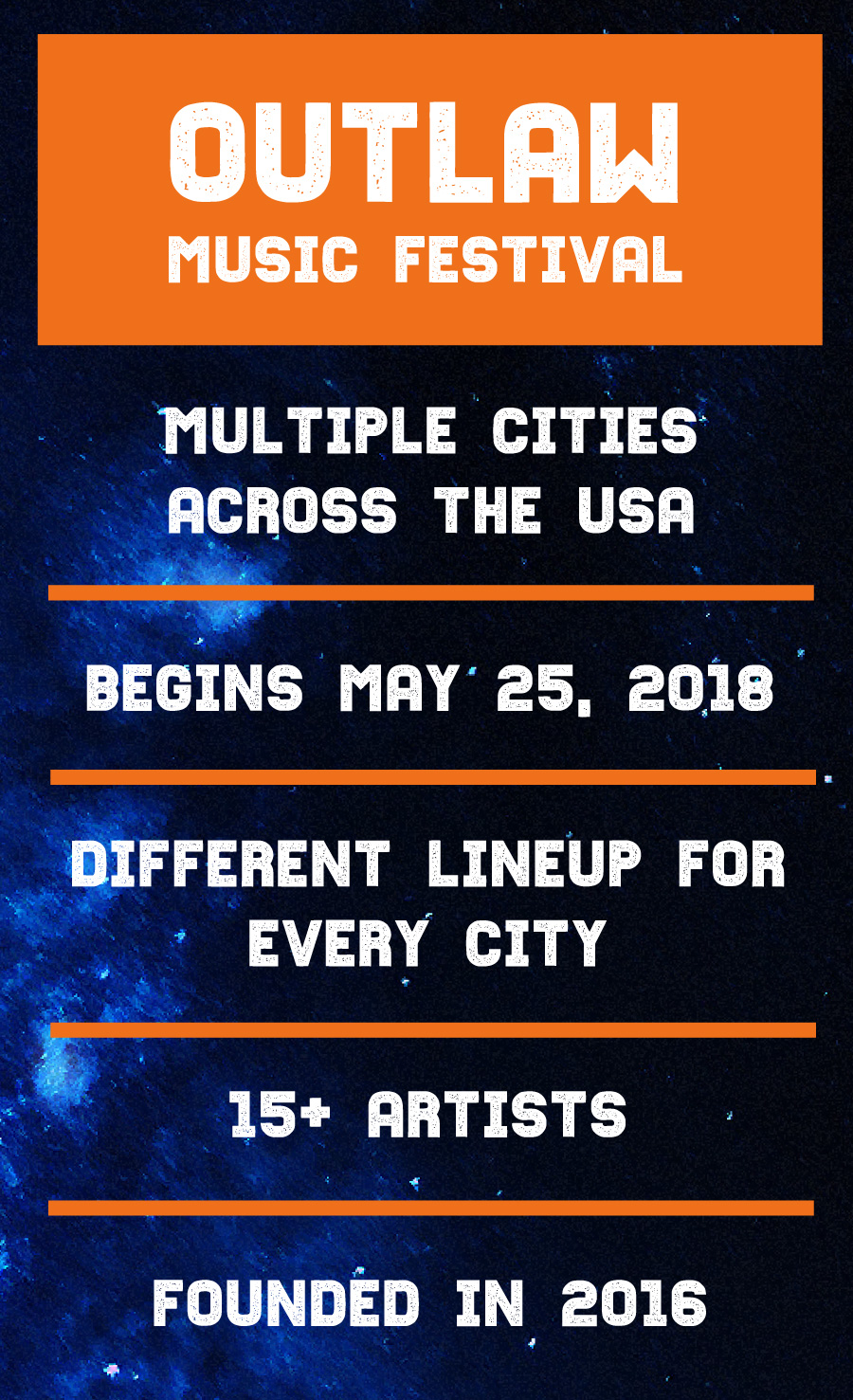 Turns out the myths were true! Sasquatch! Music Festival has been held annually at The Gorge Amphitheatre in George, Washington since 2002. Conveniently taking place every Memorial Day weekend, the festival runs for three days and features a range of musical genres with emphasis on indie rock bands and singer-songwriters. Other genres include alternative rock, hip-hop, EDM, and comedy acts.

This year’s lineup includes Modest Mouse, Bon Iver, Tyler the Creator, What So Not, Snakehips, and many more! With both camping and hotel options, art, and rides, Sasquatch! offers everything a festivalgoer would need to have a comfortable and fun festival experience. 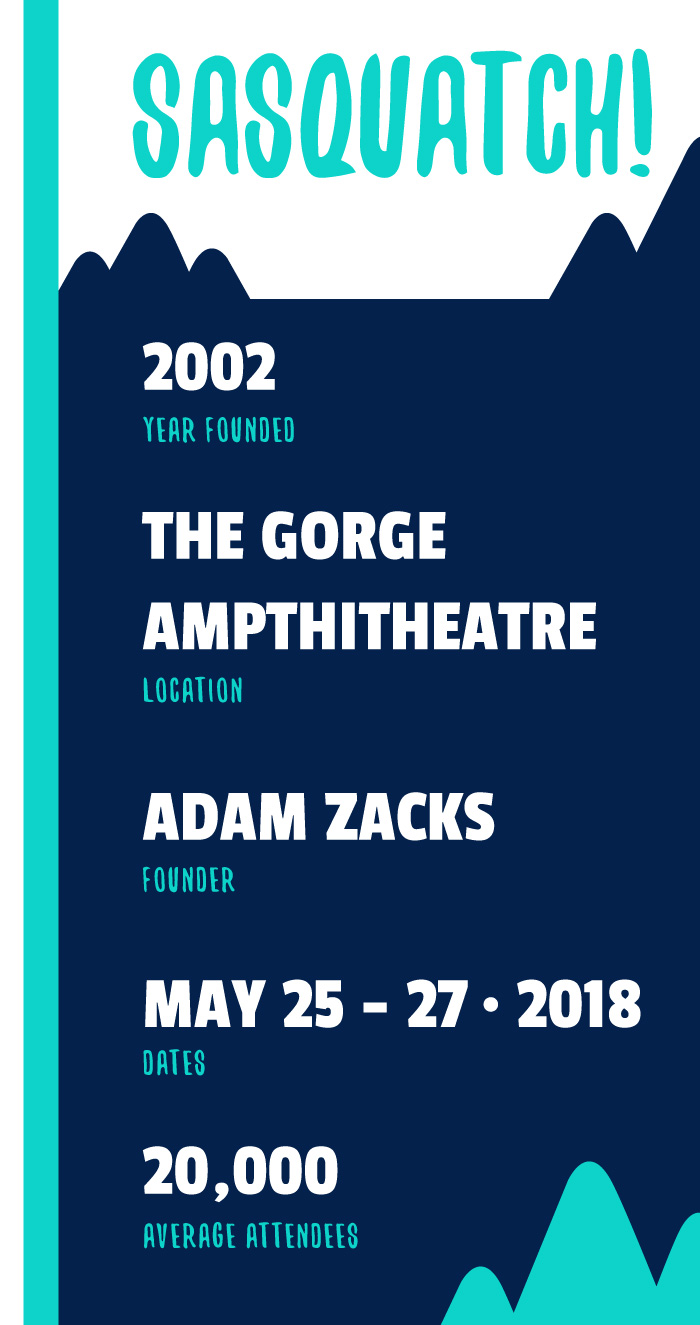 Experience one of those romantic Florida sunsets at Sunset Music Festival, a two-day celebration of EDM that has been taking place every memorial weekend since 2012. Located in Tampa’s Raymond James Stadium, SMF has historically put on quite the show, bringing big names despite its relatively new status. This year’s lineup includes world-class DJs like Marshmello, The Chainsmokers, and Excision. 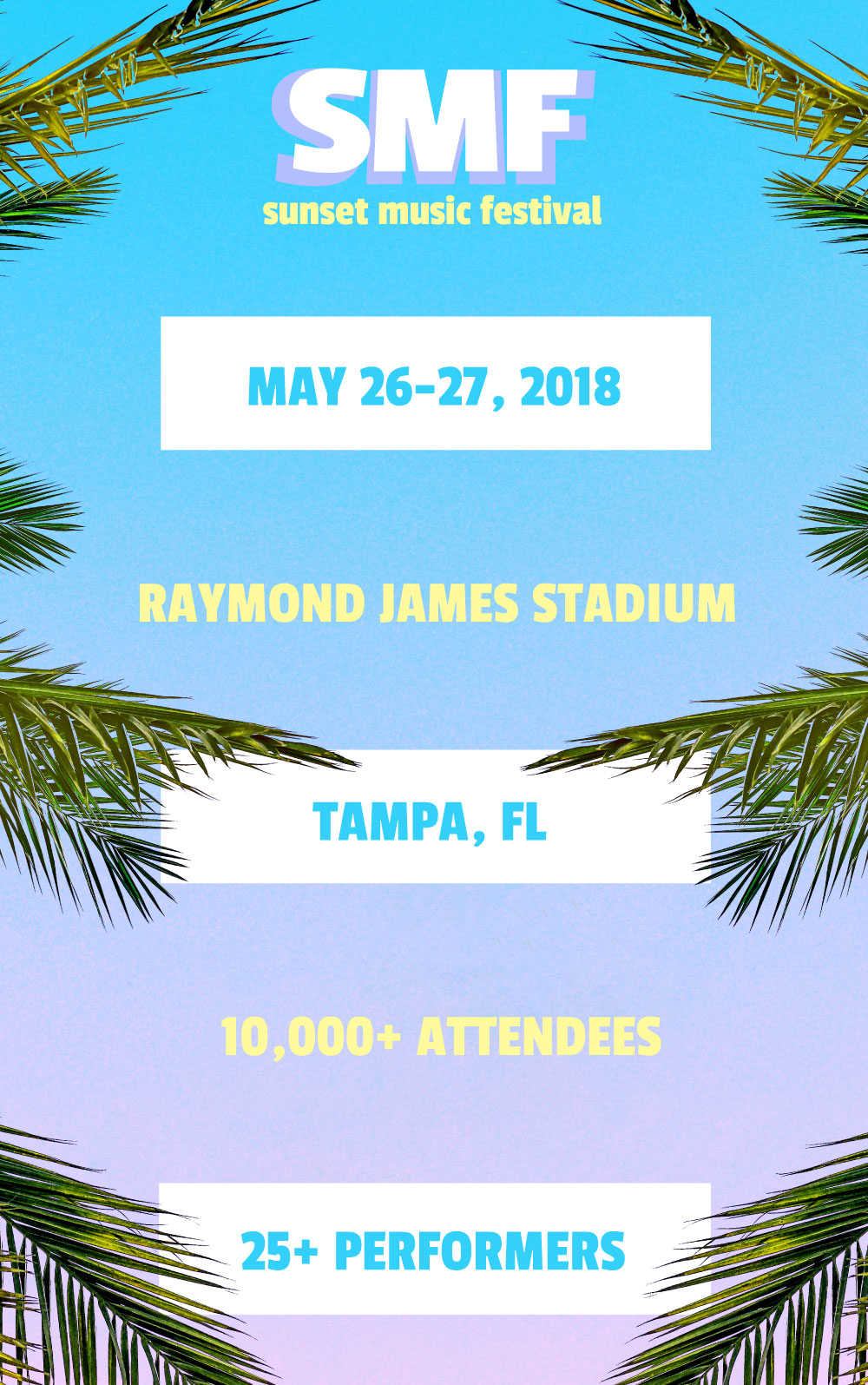 “Ball out” at the Governors Ball this summer! Contrary to what the name implies, this music festival is anything but a proper upscale event for the elites. Launched in 2011 in New York City, Governors Ball features an array of genres such as rock, EDM, pop, and folk. This year’s headliners include Jack White, Travis Scott and Eminem.

With a setting like New York City, chances are you won’t be getting much sleep as the festival features a multitude of activities and games – and, of course, food trucks for that delicious New York-style cuisine! 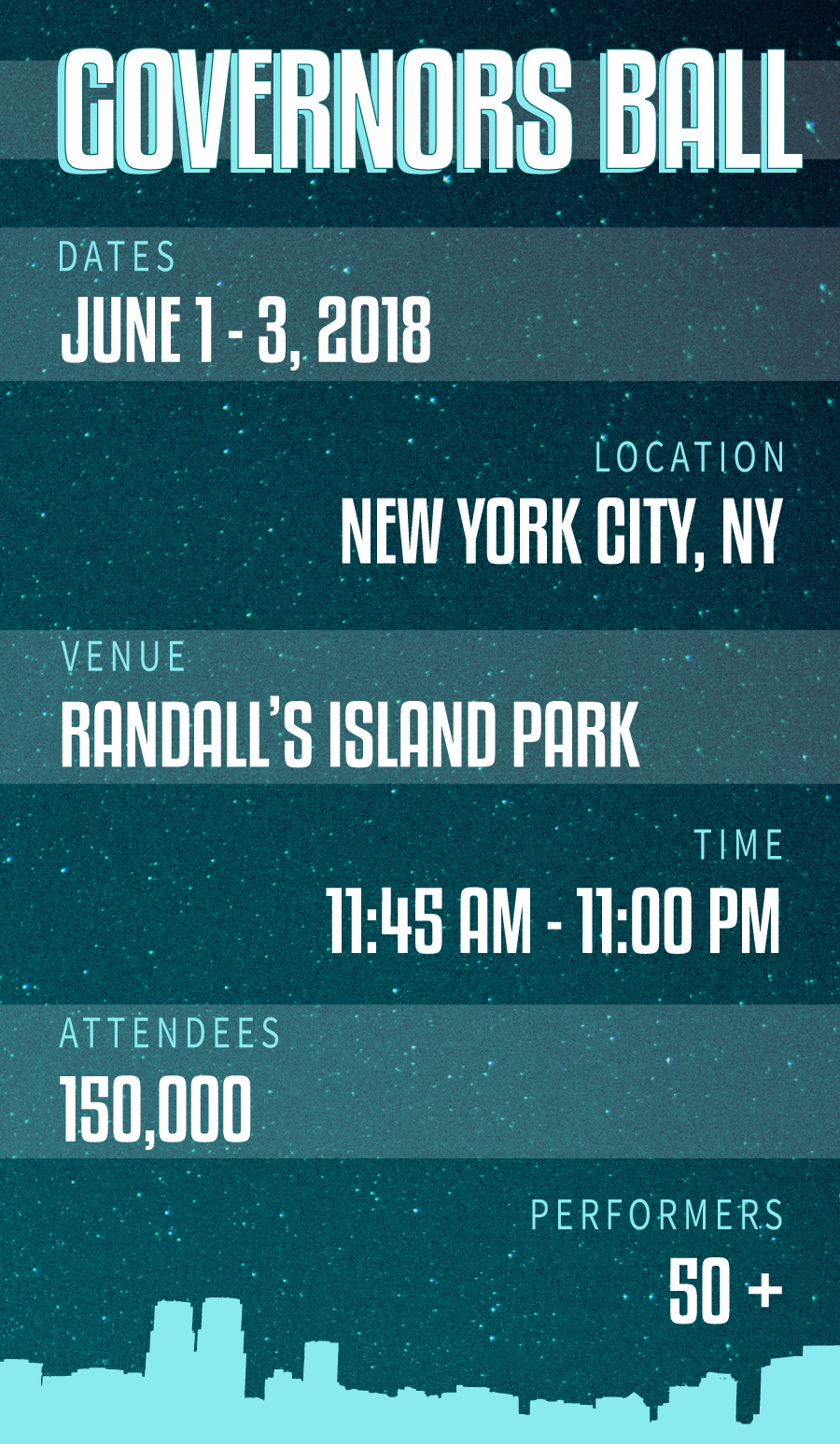 Come hang out on the ranch this summer! Bonnaroo Music and Arts Festival is an epic four-day weekend set in Tennessee’s Great Stage Park on a 700-acre farm. Although it started out with a focus on jam bands in 2002, the nation’s largest camping festival has since grown to incorporate a wide variety of musical styles from classic rock and country to hip-hop and EDM. This summer’s lineup includes The Killers, Muse, and Eminem. Other notable acts are Future, Bassnectar, Bon Iver, and Paramore.

Roo has something for people of all ages, from rides to comedy acts and late-night camp parties. If this sounds like your kind of festival, check out our insider’s guide on all the ins and outs of Bonnaroo here. 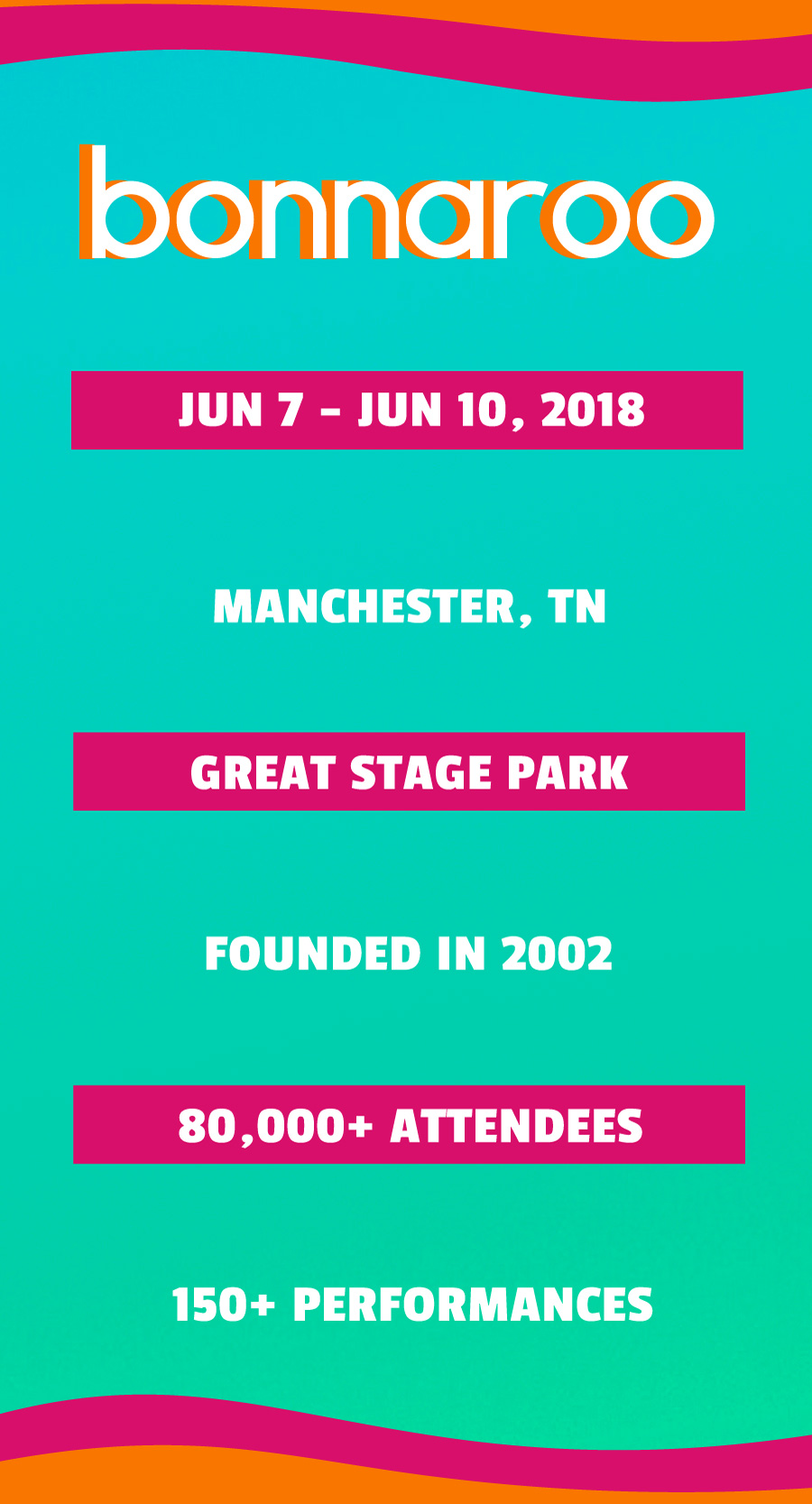 Saddle up for “The Northeast’s Biggest Country Music Party” in New York’s Hunter Mountain ski resort! Nestled amongst the gorgeous Catskill Mountains, Taste Of Country prides itself as one of the most unique festival experiences in the United States. Now in its sixth year, it offers festivalgoers the chance to camp beneath the stars in the Hunter Mountains. Talk about a swoon-worthy evening!

This year’s headliners are legends Eric Church and Florida Georgia Line, with other notable acts like Sam Hunt and Justin Moore supporting. 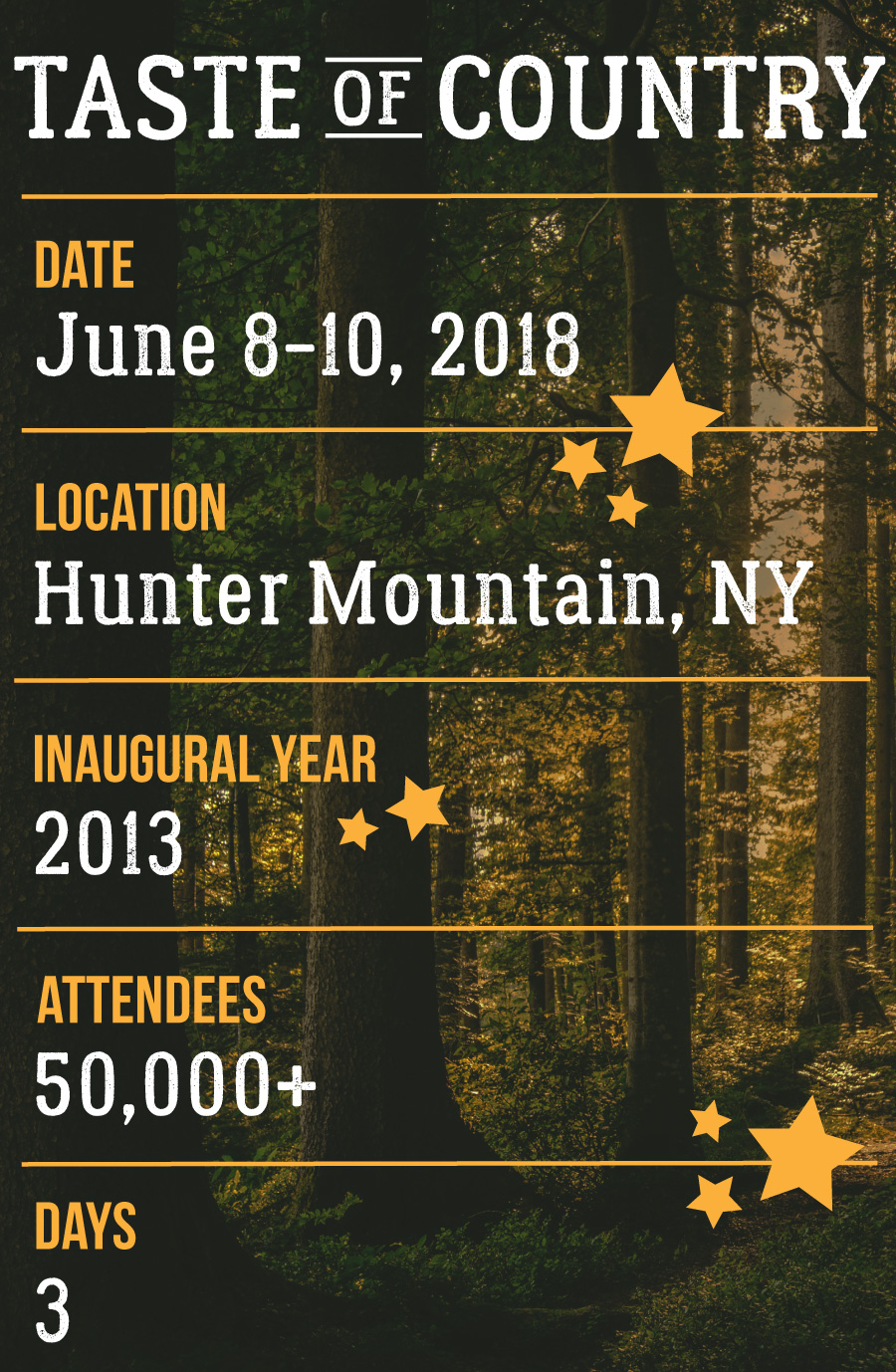 Hosted by the Veterans United Home Loans Amphitheater in Virginia Beach, Shaggfest is set to put on a memorable festival experience for its 8th year in a row. The festival brings both local and national artists to the stage for an epic day of music. Popular group N.E.R.D. will be headlining this year alongside A$AP Ferg, Amine, Ashanti, Aaron Carter, and Fetty Wap, among others. 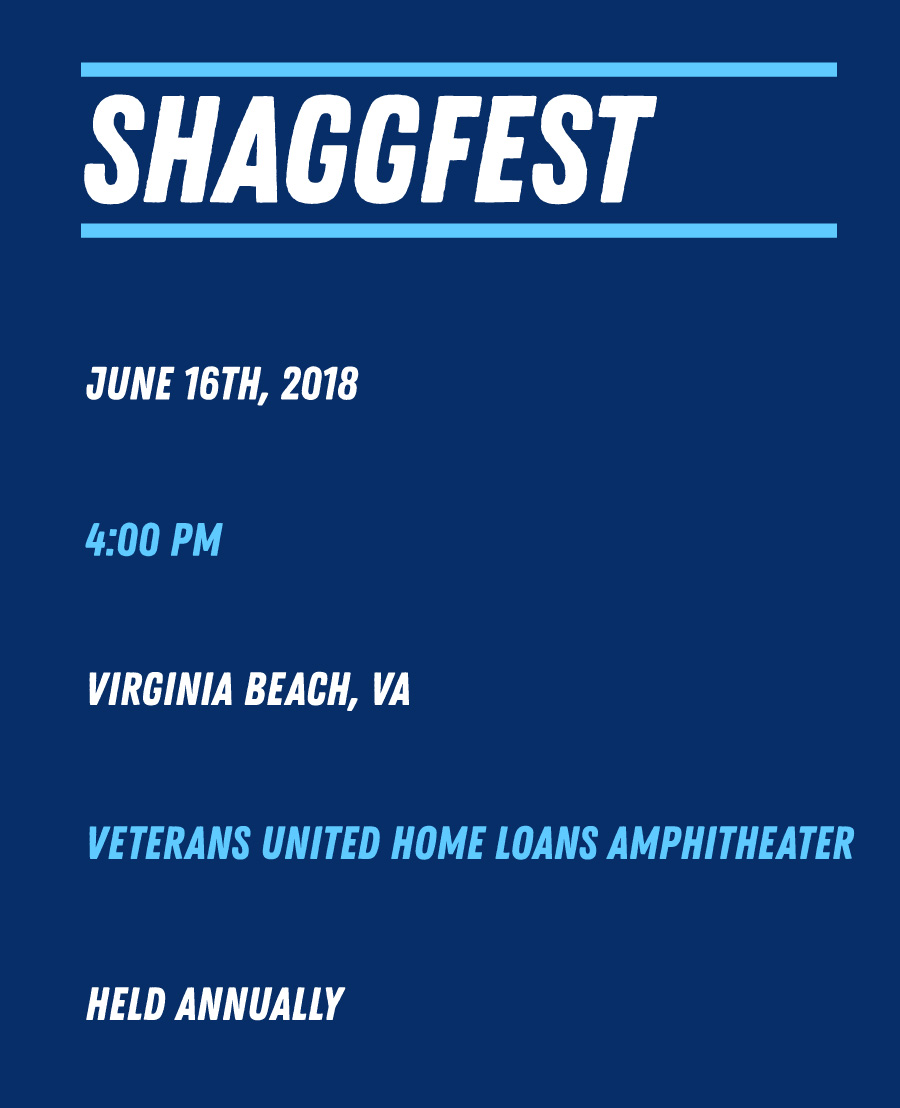 Electric Forest is a massive eight-day, two-weekend, multi-genre festival held in Rothbury, Michigan since 2008. The event is tucked amongst the spindly pines of the Double JJ Resort for a natural experience unlike any other. Much like the name implies, visitors to Electric Forest will find themselves immersed in the forests of Rothbury, with dazzling lights and sounds competing with the natural backdrop to create a magical setting. Camping is encouraged, and you’ll have to pick between two distinct lineups for its two weekends (some artists overlap on both weekends). Headliners include Bassnectar, Griz Live Band, Marshmello, ZHU, and Rufus Du Sol.

The Forest also offers an array of activities like yoga and art installations to keep you busy. If you’re a fan of the outdoors and the imaginary, you’ll have to check this one out. 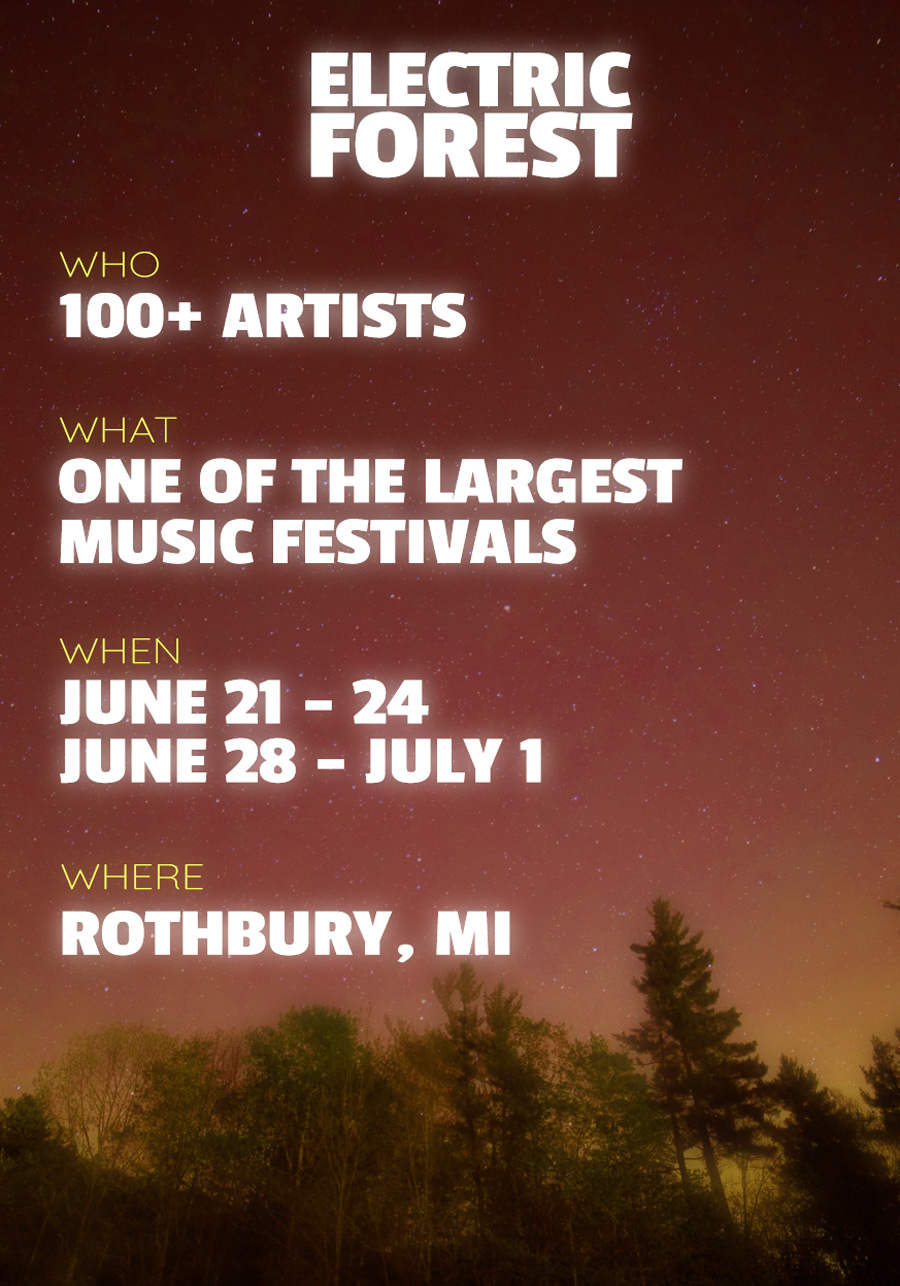 The largest traveling music festival in the U.S. is coming to a city near you! Vans Warped Tour has been trekking across the states, sharing rock music with fans each year since 1995 -- which also makes it the longest-running touring festival.

This year marks the festival’s final full cross-country journey, so be sure to catch a show while you still can. Notable acts on the lineup include Black Veil Brides, All Time Low, We the Kings, and Asking Alexandria. 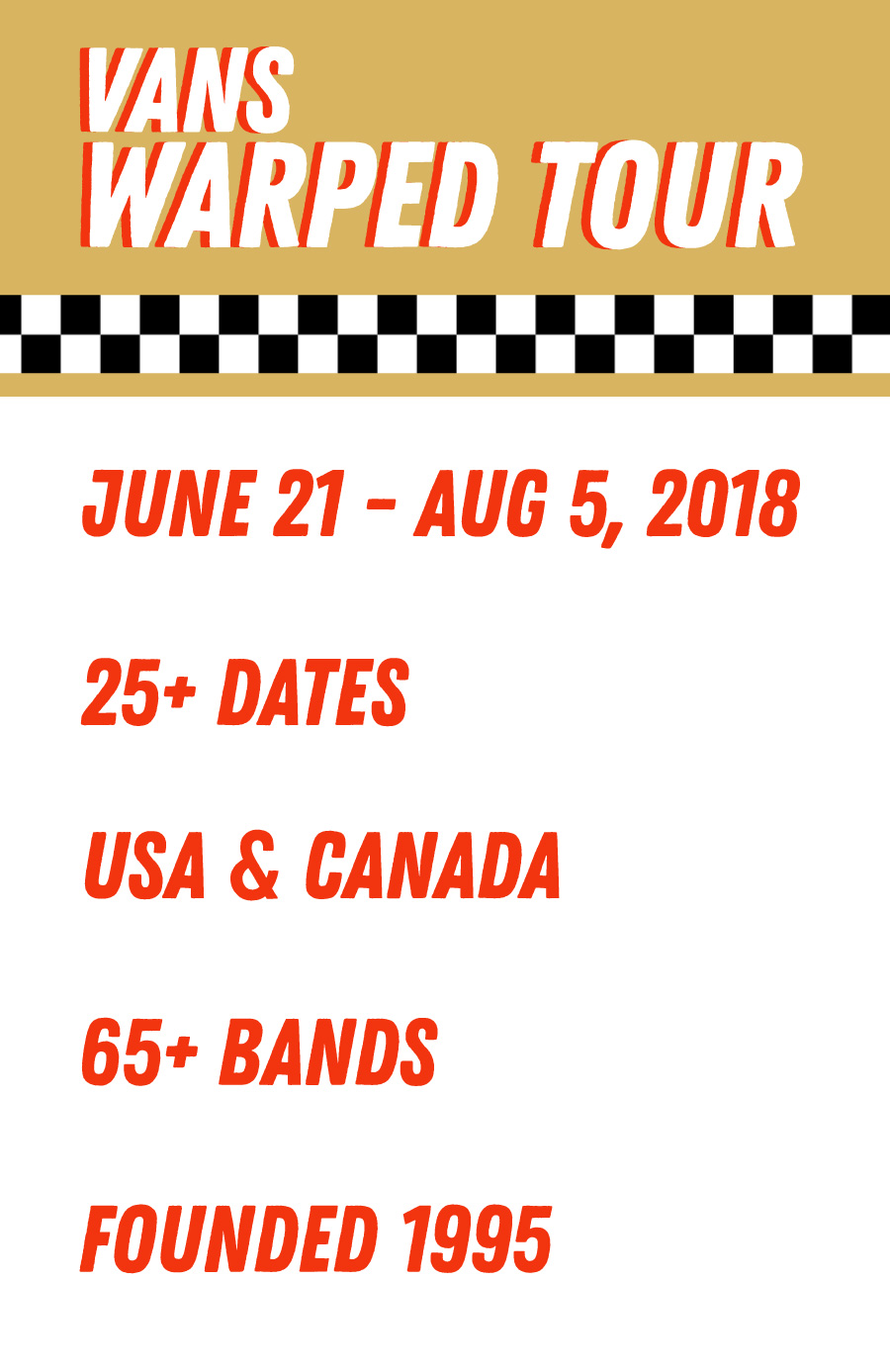 Next up is Summerfest, a massive 11-day celebration held along the lakefront at the 75-acre Henry Maier Festival Park in Milwaukee. With 11 stages, over 800 acts, and an attendance of over 900,000, it’s no wonder why Summerfest holds the Guinness World Record for The World’s Largest Music Festival. 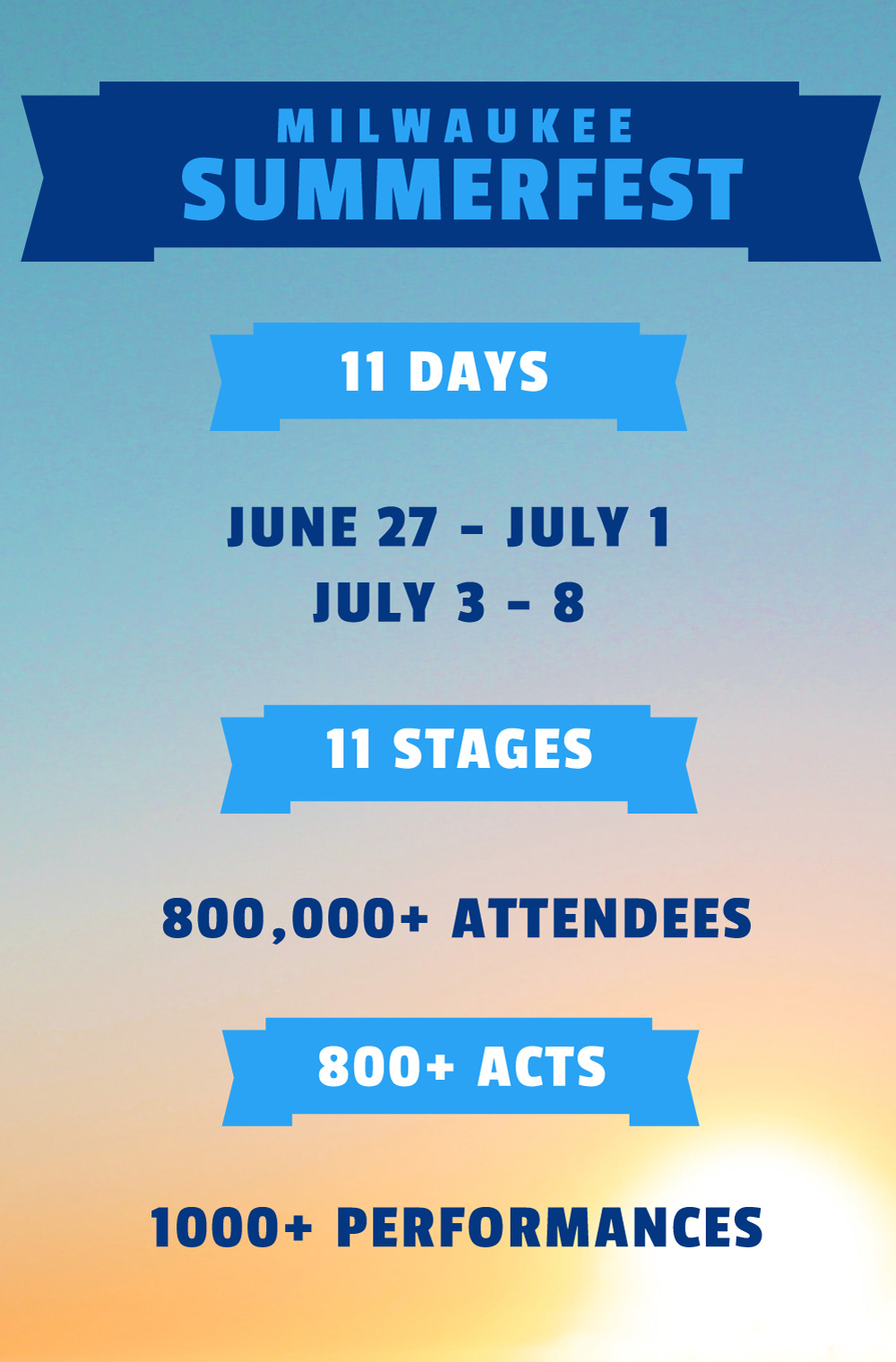 Lollapalooza is taking over Chicago’s Grant Park for a four-day extravaganza, and you’re invited to experience the energy! Founded in 1991, the festival has hosted some of the biggest names in music across a wide range of genres like alternative rock, heavy metal, punk rock, hip hop, and EDM.

This August, Chicago’s Grant Park will be transformed into a massive collection of music featuring 8 stages, over 170 acts, delicious Chicago eats, beautiful art, and good vibes all around. This year’s lineup is a stunner, with big names like The Weeknd, Travis Scott, Arctic Monkeys, Odesza, and Bruno Mars. 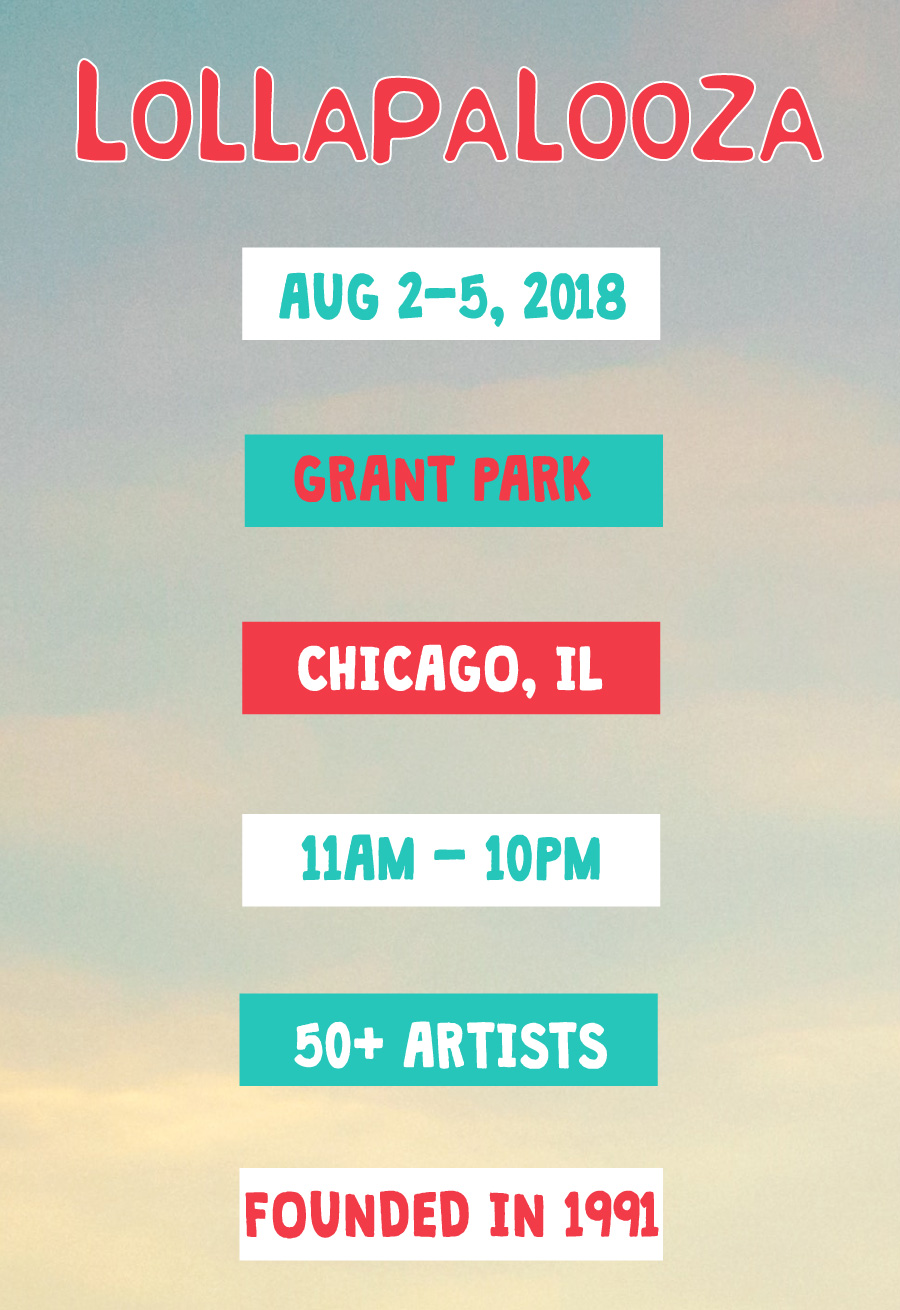 Spend your Labor Day weekend in the Big Apple jamming to your favorite EDM artists! Electric Zoo is wrapping up this festival season the same way it started – with lots of dance music. This year’s lineup has yet to be revealed, but judging by past schedules it’s guaranteed to feature the most popular international DJs and live acts from all over the world. Artists like Above & Beyond, deadmau5, Galantis, and Armin Van Buuren have taken over one of the four stages set up at New York City’s Randall Island, giving fans the experience of a lifetime. 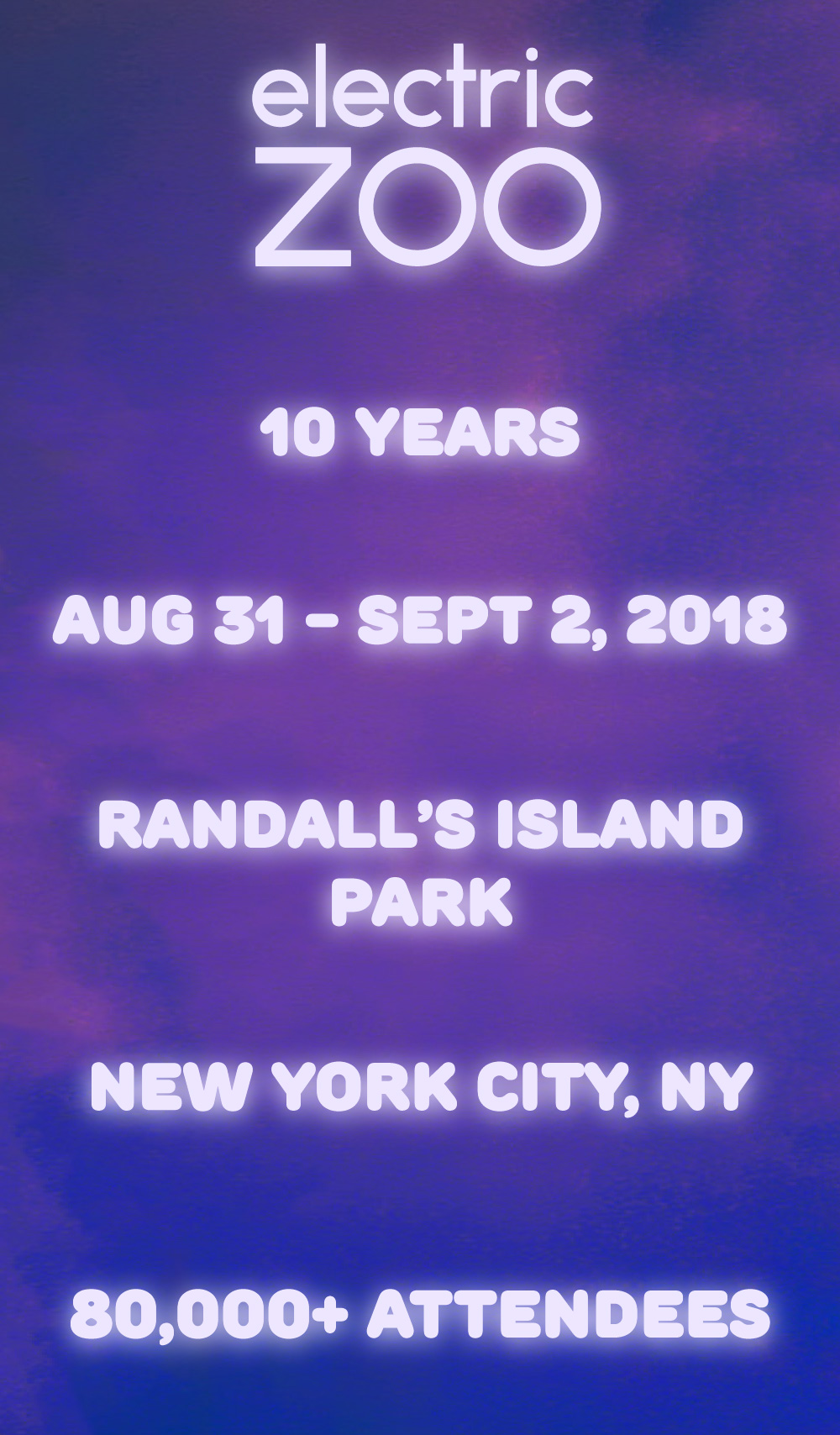 Which festival will you be hitting this summer? Whatever you decide, make sure you go in fully prepared, stay safe, and most importantly, have fun!