Two original members of American rock band The Byrds, Roger McGuinn and Chris Hillman, are treating fans to a nostalgic tour in celebration of 1968’s Sweetheart of the Rodeo, the band’s influential sixth studio album. The co-founders and country-rock pioneers will play their hit album in its entirety this summer 2018, telling stories surrounding it for fans across the United States.

So far, McGuinn and Hillman have confirmed performances in five lucky cities , beginning with a show at the Ace Hotel in Los Angeles on July 24. From there, the talented pairing will hit Saratoga, California on July 29. They will then go to Albany, New York for a show on September 18 and in Hopewell, Virginia on September 20. The tour is currently set to wrap on October 3 in Akron, Ohio at Akron Civic.

"On March 9, 1968, Roger McGuinn and I along with many fantastic musicians began recording the Sweetheart of the Rodeo album at Columbia Studios in Nashville," Hillman said in a statement. "It was truly a pivotal moment in our lives taking a turn toward the music we always felt a strong kinship with. We are honored that it has left a strong, long lasting impression on country and rock music."

“We’re all looking forward to taking the fans through the back pages of the recording,” added McGuinn. “The concert will include songs that led up to that groundbreaking trip to Nashville and all the songs from that album.”

The duo will be joined on tour by Marty Stuart and His Fabulous Superlatives, his country band formed in 2002. Stuart acts as the lead singer, incorporating an eclectic mix of rockabilly, honky tonk, and traditional country music.

"The Byrds' Sweetheart of the Rodeo recording stands as a milestone in American music. I bought my first copy of the record in 1972," Stuart said in a release. "Upon my first listen, I was mesmerized at the effect of the combined power country music, rock & roll, bluegrass, gospel and folk music had on me. From that day forward, I considered Sweetheart of the Rodeo a blueprint as to how I should live my musical life."

Stuart added: “It is truly an honor for me and the Superlatives to get to go out and play music from Sweetheart with Roger and Chris. We love and greatly admire both of them and I have to believe this is a show not to be missed.”

Who Is Roger McGuinn?

James Roger McGuinn was born in raised in Chicago, Illinois to parents who were involved in journalism and public relations. He became interested in music after hearing Elvis Presley's "Heartbreak Hotel" and asked his parents to buy him a guitar. Around the same time, he was also influenced by country artists like Johnny Cash, Carl Perkins, Gene Vincent, and The Everly Brothers.

In 1957, he enrolled as a student at Chicago's Old Town School of Folk Music, where he learned the five-string banjo and continued to improve his guitar skills. After graduation, McGuinn performed solo at various coffeehouses on the folk music circuit where he was hired as a sideman for other folk music groups.

McGuinn formed the Byrds in 1964. During his involvement as the front man, he became a pioneer of the country-rock genre, developing two innovative and very influential styles of electric guitar playing. The first was "jingle-jangle,” a banjo finger picking style. The second style was a merging of the saxophone’s free-jazz atonalities, which was influential in psychedelic rock.

The Byrds released their first album in 1965, Mr. Tambourine Man, which yielded their first international hit single of the same name, marking the birth of folk rock. The single, "Turn! Turn! Turn!", was the Byrds' second number one in late 1965. In 1966, they released the hit “Eight Miles High,” which was also featured in their 1970 album Untitled as a 16-minute version. In 1969, McGuinn's solo version of the "Ballad of Easy Rider" appeared in the film Easy Rider, while a full band version was the title track for the album released later that year.

In 1968, McGuinn helped create the groundbreaking album Sweetheart of the Rodeo, which led to the rise in popularity of country rock.

Who Is Chris Hillman?

Chris Hillman was born at his family’s ranch home in rural San Diego as the third of four children. He has credited his older sister with piquing his interest in country and folk music when she returned from college during the late 1950s with folk music records by The New Lost City Ramblers and others. Hillman's mother encouraged his musical interests and bought him his first guitar; shortly thereafter he developed an interest in bluegrass, particularly the mandolin. At age 15 he convinced his family to allow him to travel by train to Berkeley for lessons from mandolinist Scott Hambly.

Hillman made a name for himself in the San Diego folk music community and joined various bands throughout the 1950’s but none managed to achieve much success. At this point a frustrated Hillman considered quitting music and enrolling at UCLA when he received an offer to join McGuinn, David Crosby, Gene Clark, and Michael Clarke in a new band, the Byrds.

Hillman was recruited to play bass guitar, although he had never picked up the instrument before. Thanks to his bluegrass background, he quickly developed his own melodic style on the instrument. During the mid-1960s the Byrds ranked as one of the most successful and influential American pop groups; they recorded a string of hits like "So You Want to Be a Rock 'n' Roll Star".

Hillman stayed in the background for the Byrds’ first two albums, but Clark’s departure in 1966 gave him the opportunity to develop as a singer and songwriter for the group.

This was first seen on the Byrds' 1967 album, Younger Than Yesterday, where he co-wrote and shared lead vocals with McGuinn on the hit “So You Want to Be a Rock 'n' Roll Star". Hillman also wrote (and sang) hits like "Have You Seen Her Face", "Thoughts and Words", "Time Between", and "The Girl with No Name", the latter two demonstrating his bluegrass and country roots. Hillman's prominence continued with the Byrds' next album, The Notorious Byrd Brothers, on which he shared songwriting credit on seven of the album's eleven songs.

Today, the Byrds are considered by critics to be one of the most influential bands of the 1960s. 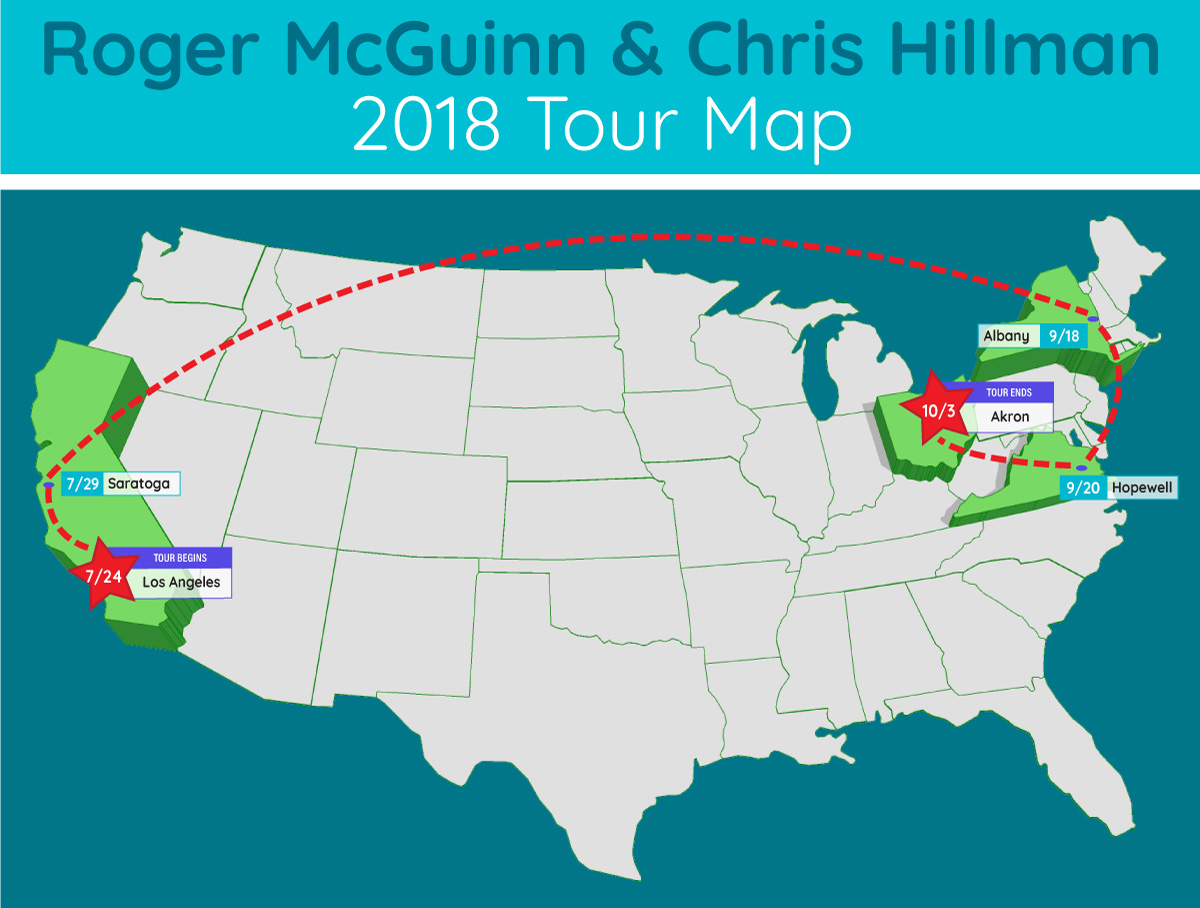 Where are Roger McGuinn and Chris Hillman playing near me?