Phillip Phillips and Gavin DeGraw Are Touring This Summer

The pair will embark on the 16-date outing August 9 in Park City at the Snow Park Outdoor Amphitheater. From there, Phillips and DeGraw will hit cities like Seattle, San Diego and Las Vegas. The tour will wrap on September 5 at Innsbrook Pavilion in Glen Allen, VA.

Phillips recently wrapped his own North American “The Magnetic Tour” in support of his third studio album, Collateral, which was released in January to positive reviews. He first gained recognition when he was crowned the winner of the 11th season of American Idol, beating Jessica Sanchez, the first female recipient of the judges' save.

DeGraw’s last album release came in 2016 with Something Worth Saving, his sixth studio album that yielded hit singles like “She Sets the City on Fire” and “Making Love with the Radio On.”

Who Is Phillip Phillips?

Prior to auditioning for American Idol, Phillips tried out for a spot on the second season of America’s Got Talent but did not make it to the next round. He was an Idol hopeful in Savannah, Georgia, performing “Superstition” by Stevie Wonder and Michael Jackson’s “Thriller” with his guitar. The sole contestant who was never in jeopardy of elimination in any week of the competition, Phillips became the winner on the finale after a record-breaking 132 million votes were cast. His coronation song, "Home," was released after his performance, and had the biggest sales week for any Idol winner's coronation song.

Phillips’ debut album, The World from the Side of the Moon was released in 2012 and featured his coronation song. It was certified platinum, spawning another number one hit “Gone, Gone, Gone.” His second album, Behind the Light, came out in 2014 and yielded hits like “Raging Fire” and “Fly.”

Who Is Gavin DeGraw?

Gavin DeGraw was born in upstate New York and began singing and playing piano at the age of 8. He had an epiphany when he discovered Ray Charles and Sam Cooke, who inspired him to become a musician. He attended the nearby Ithaca College, where he went on a music scholarship. He lasted just one semester there before enrolling at Berklee College of Music in Boston, where he left after a year.

He returned home and eventually moved to New York City, where he had a lot more success making music than studying it. He became a popular club singer until his big break in 2002.

DeGraw signed to J Records and released his first album, Chariot, in 2003. It’s his most successful to date, selling over a million copies. It smash hit was “I Don’t Want to Be,” which catapulted him to fame. His fourth album, Sweeter, was released in 2011 was supported by the hit single “Not Over You,” as well as “Soldier” and “Sweeter.”

His duet with Colbie Caillat on "We Both Know" for the film Safe Haven received a Grammy Award nomination. 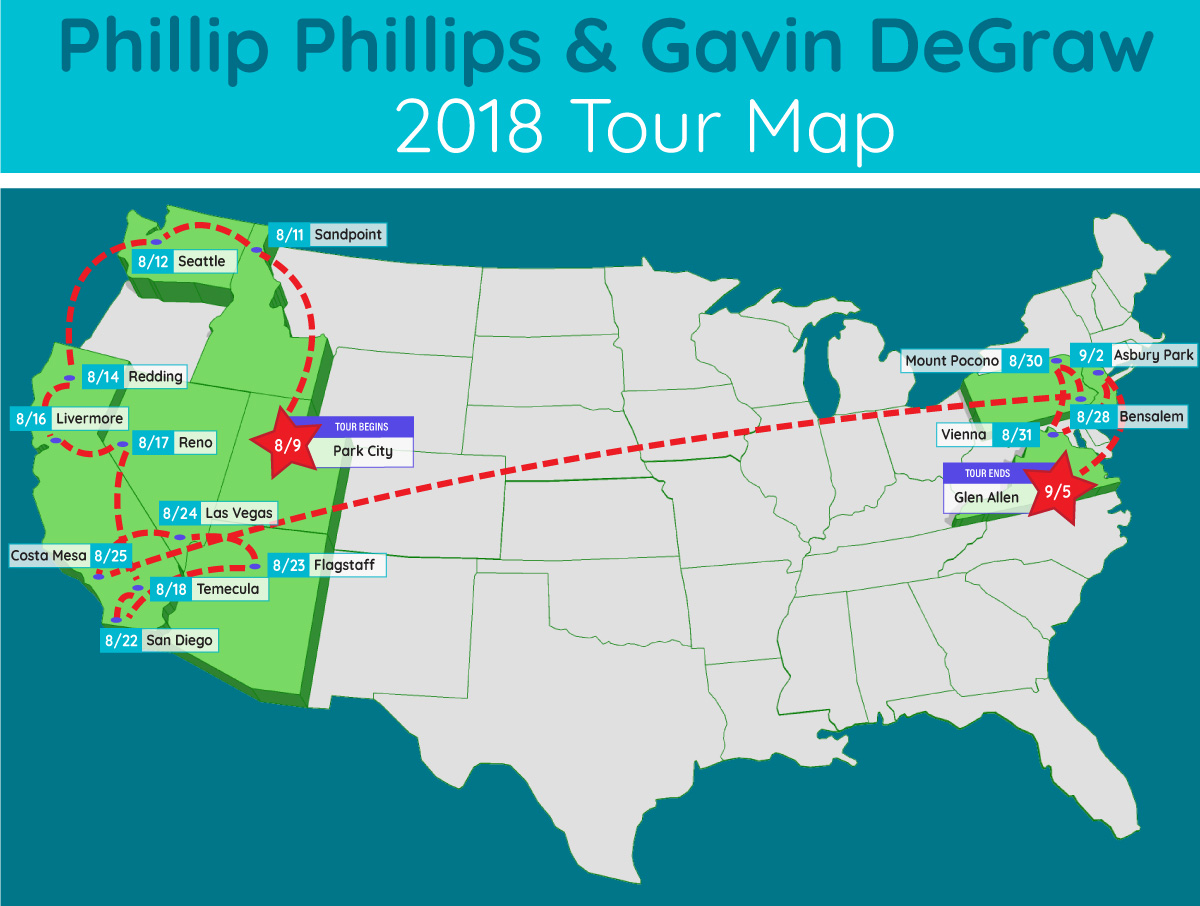 Where are Phillip Phillips and Gavin DeGraw playing near me?