Our Top Festival Picks for Every Music Lover

What kind of show are you ready to dedicate yourself to for an entire weekend? Trying to find the best fit for music festivals can get pretty overwhelming pretty quick. Depending on your preference, heading straight for what’s in the headlines may not always be your best move (although we do love us some Coachella, don’t get us wrong). If you’re looking for something a little more in line with your musical preferences, fear not – we’ve got your covered. Scroll down to read our top picks - outlined by genre - and get to planning a music-filled weekend worth remembering!

A Little Bit Of Everything

When: Typically runs within the first week of August.

What to Know: A unique concert experience taking place between the Chicago Skyline and the shores of Lake Michigan. Lollapalooza got its start in 1991 by Jane’s Addiction frontman Perry Farrell, initially starting out as a touring festival before laying down roots in Grant Park, Chicago in 2005. Despite a firm home base in Chi -Town, Lolla has expanded to become a global celebration of music with editions taking place throughout South America and Europe each year. Lollapalooza offers a diverse lineup of A-list artists that’s sure to please music lovers of every genre.

When: Begins the last Wednesday in June annually, runs 11 days and usually includes the 4th of July.

What to Know: Summerfest has been bringing the hottest names in music to Henry Maier Festival Park a.k.a. “Summerfest Grounds” in Milwaukee each summer since 1968. The festival features 12 stages (including the 23,000-capacity American Family Insurance Amphitheater) with performances from over 800 artists, covering a wide range of genres to create the perfect backdrop to your summer night or 4th of July. Summerfest draws between 800,000-900,000 festival goers annually, promoting itself as “The World’s Largest Music Festival,” a title which was certified by Guinness World Records in 1999.

When: Typically runs within the first two weeks of May.

What to Know: Founded in 2013, the Shaky Knees Festival was created in order to bring a proper indie music festival to the already-established festival scene in Atlanta. With attendance numbers continuing to climb each year, the Shaky Knees Festival has moved to different locations around ATL in order to accommodate its growing demand since its inception. Shaky Knees has featured a diverse lineup of artists over the years, ranging from local, up-and-coming acts to world-renowned artists.

When: Typically runs within the first two weeks of June.

What to Know: Get your cowboy hat ready and switch out those boots for some flip-flops! Country music meets the sunny shores of Myrtle Beach when the Carolina Country Fest takes over the boardwalk in early June. Established in 2015, this three-day festival spans 18 acres of coastal area, bringing over 30 of the hottest acts in country music to its three stages. Despite only having four years in the books, the Carolina Country Fest’s attendance record has steadily been on the rise, drawing over 30,000 festival-goers in 2018.

When: Mid to late May.

What to Know: Now a global phenomenon, the Electric Daisy Carnival (a.k.a. EDC) boasts all the glitter and glam of Las Vegas in three-day celebration of electronic music. Established in Las Vegas in 1991, EDC has grown to include editions around the globe, including annual installations in the UK, Mexico, Puerto Rico, Brazil, Japan, and India. The festival features live shows from top producers and DJs in the electronic/dance genre, set to a backdrop of a full-sized LED-infused carnival that draws hundreds of thousands of festival-goers each year.

When: Typically runs the second weekend in May.

What to Know: Launched in Miami in 2014, the Rolling Loud Festival has grown to establish itself as the largest hip-hop festival in the world. A newcomer to Florida’s festival scene five years ago, the three-day music event quickly captured festival-goers attention with a killer lineup of the hottest acts in hip-hop, eventually growing to include editions in both Northern and Southern California. With a rapidly growing attendance record and world-renowned reputation, the Rolling Loud Festival has plans in the works to expand internationally to Japan, China, and Europe in the near future.

Where: Traditionally has taken place in Hunter Mountain, NY, however the 2019 festival is set to take place at the original Woodstock site in Bethel Woods.

When: Runs the weekend after Memorial Day annually.

What to Know: Established in 2004, the Mountain Jam music festival has grown to become the largest rock music and camping festival in the state of New York. The four-day festival boasts a lineup of over 50 rock acts, including some of the most legendary artists rock and roll. Mountain Jam is regularly ranked as one of the top musical festivals in the country by national publications including Rolling Stone Magazine. 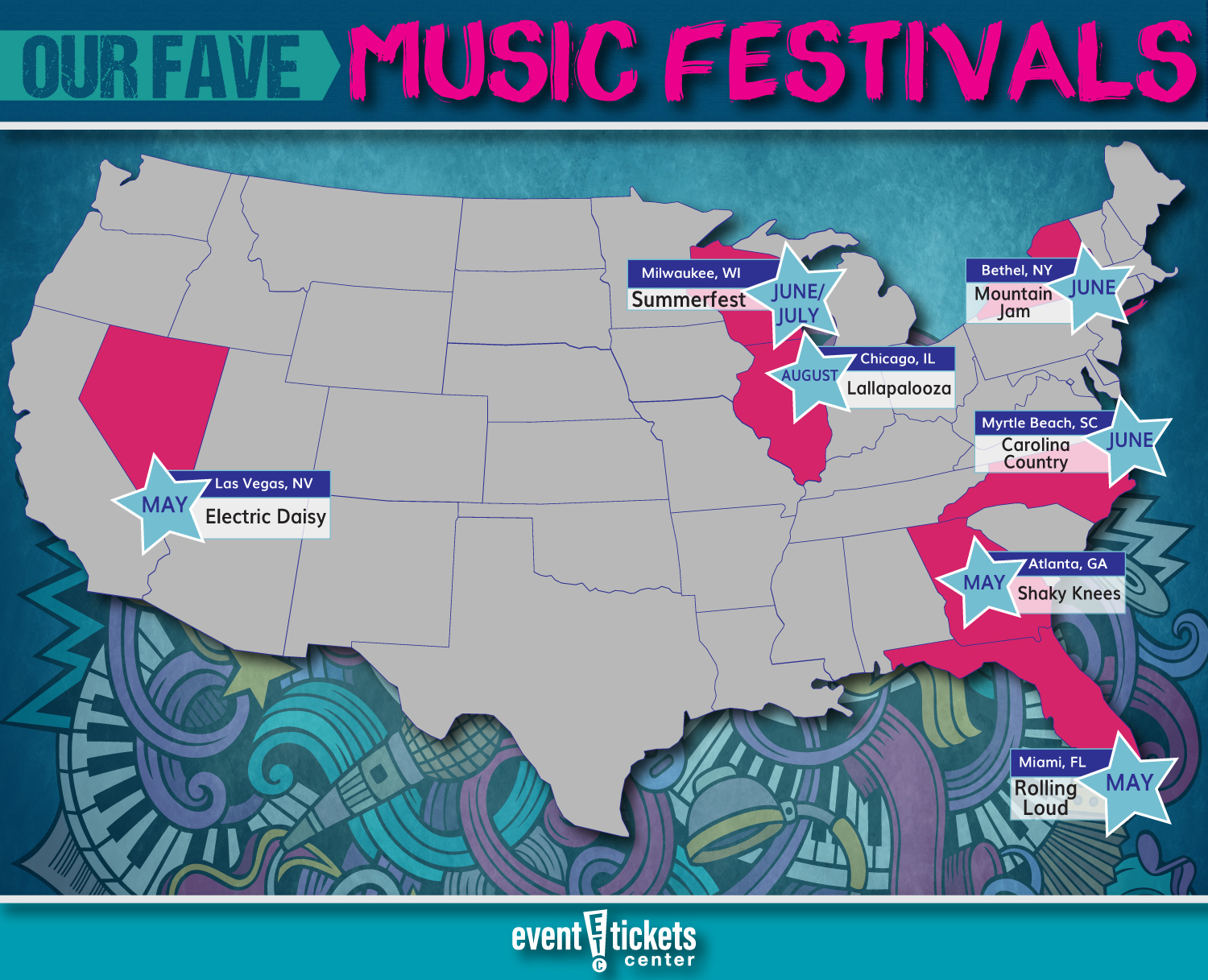