Award-winning country music band Old Dominion recently announced they are adding brand new 2018 dates to their ongoing “The Happy Endings World Tour”! The 22 new shows will see the band hit cities across the globe in the U.S., U.K. and Ireland in honor of their latest album of the same name.

The 13-city U.S. leg will begin on October 4 in Knoxville, Tennessee at the Knoxville Civic Coliseum. From there, Old Dominion will hit cities like Amarillo, Texas; Roanoke, Virginia; and St. Augustine, Florida. The final U.S. show in Duluth, Minnesota on December 15 marks the end of the entire tour.

The additional dates come on the heels of a big win by the five-member country group, who took home the Vocal Group of the Year Award at the Academy of Country Music Awards. The achievement marks their second ACM trophy after being named New Vocal Duo or Group of the Year in 2016. They are also currently among the contenders for Top Country Duo/Group Artist at the Billboard Music Awards on May 20th and are taking the supporting slot on Kenny Chesney’s headlining “Trip Around the Sun” stadium tour.

Their 2017 album Happy Endings peaked at No. 1 on the Billboard Country Albums chart, yielding top charting hits like “Break Up With Him” and “No Such Thing As A Broken Heart.”

Who Are Old Dominion?

Nashville-based country music band Old Dominion formed in 2007 by members Matthew Ramsey (lead vocals), Trevor Rosen (guitar, keyboards), Whit Sellers (drums), Geoff Sprung (bass guitar), and Brad Tursi (guitar). They chose the name Old Dominion as a nod to their Virginia roots, since “Old Dominion” is a nickname for the state. Ramsey and Sellers are both from the Roanoke region, while Sprung and Tursi attended James Madison University, where they met Sellers. Rosen is the outlier hailing from Detroit, Michigan.

Ramsey and Rosen first met in Nashville, where they formed a songwriting partnership in 2003. The partnership grew to include the other members who wrote songs and occasionally performed together, a style that they still use as a band.

Their first self-titled EP came in 2014, followed by their debut studio album, Meat and Candy, which featured hits like "Break Up with Him,” "Snapback,” and "Song for Another Time.” Their second album Happy Endings was released in 2017, which yielded the singles "No Such Thing as a Broken Heart" and "Written in the Sand".

As talented songwriters, Ramsey, Rosen and Tursi have written several hit singles for other big country music artists. For example, Tursi and Ramsey co-wrote the Kenny Chesney hit "Save It for a Rainy Day," while Tursi also shares credit on Tyler Farr’s "A Guy Walks Into a Bar."

Ironically, Tursi did not like country music growing up and would make fun of his father for listening to it. Now, two hit studio albums, awards, and a world tour later, here they are. 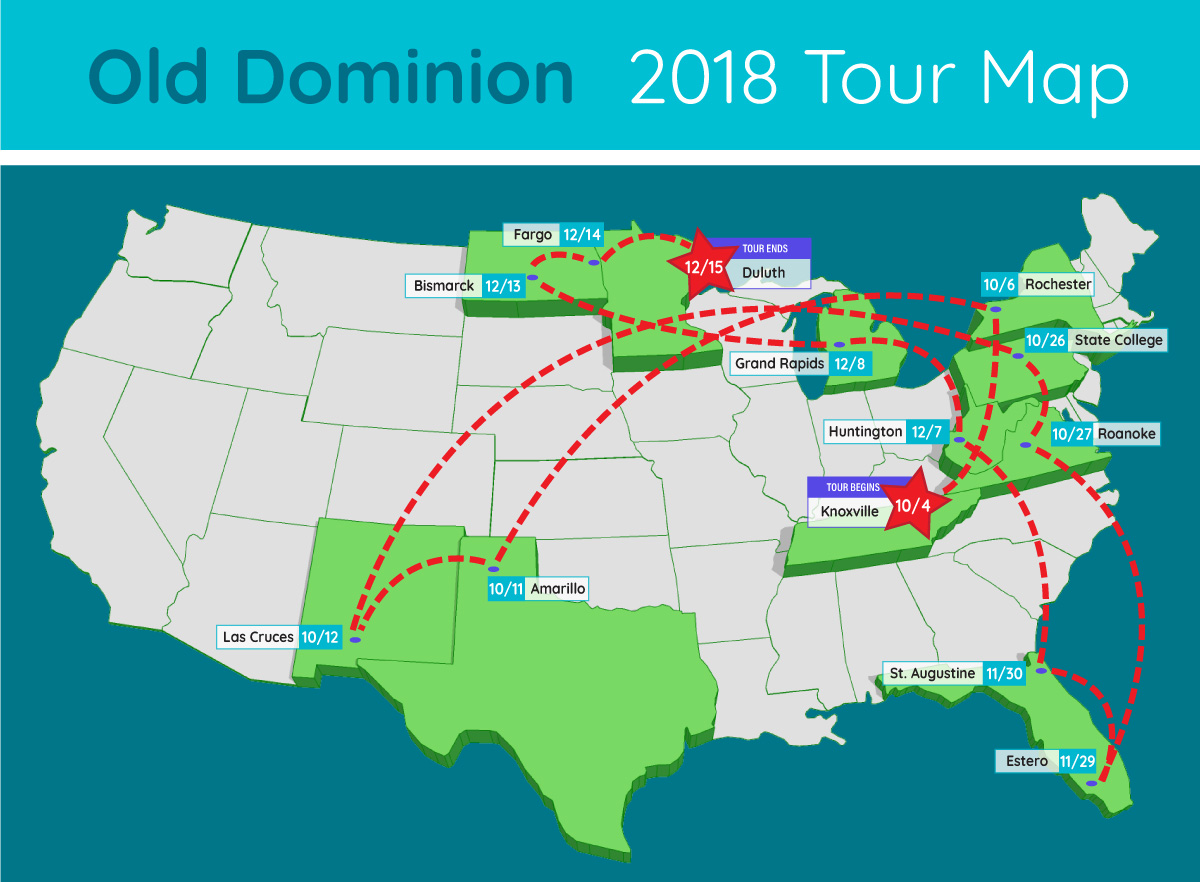 Where is Old Dominion playing near me?