New Panic! at the Disco Tour and Album Announcement Has Fans ‘Saying Amen’

Panic! at the Disco fans are in for a treat this summer, as the rock band has announced the upcoming release of their new album, Pray for the Wicked (out June 22) and a 28-city tour of the same name in support of their latest work.

The trek launches at the Target Center in Minneapolis on July 11 and includes stops in Detroit, Chicago, and Toronto before wrapping in Las Vegas on August 18.

To tease the release of their sixth studio album, Panic! at the Disco has released two of its tracks, “Say Amen (Saturday Night)”, which also has a music video, and “(Fuck A) Silver Lining.”

In an interview, lead singer Brendon Urie shed light on the inspiration behind the band’s latest album:

"After being away in New York for months doing Kinky Boots, I just wanted to hang out at home when I got back to LA,” Urie said in a press release. “I was so revved up that I asked some friends to come over to my home studio to help me write about all the incredible things I’ve experienced the last couple of years. Pray for the Wicked is my 'thank you' to our fans and the most fun I’ve ever had making an album."

The tour will be supported by A R I Z O N A, a rock and electropop band from New Jersey who recently released their debut album GALLERY in 2017 to favorable reviews. Also opening is Hayley Kiyoko, a singer-songwriter who founded pop girl group The Stunners in 2007 before embarking on a successful solo career in 2011.

Who is Panic! at the Disco?

Panic! at the Disco achieved stardom shortly after their 2004 formation with the release of their debut album, A Fever You Can’t Sweat Out. It became wildly popular due to the hit single “I Write Sins Not Tragedies”, achieving double platinum status. The band has won several awards throughout its career, including a Grammy Award for Video of the Year in 2006. Their latest album comes on the heels of a successful comeback launched by 2016’s Death of a Bachelor, which debuted at the top of the Billboard 200. The band is looking to maintain that momentum this year with their new releases. 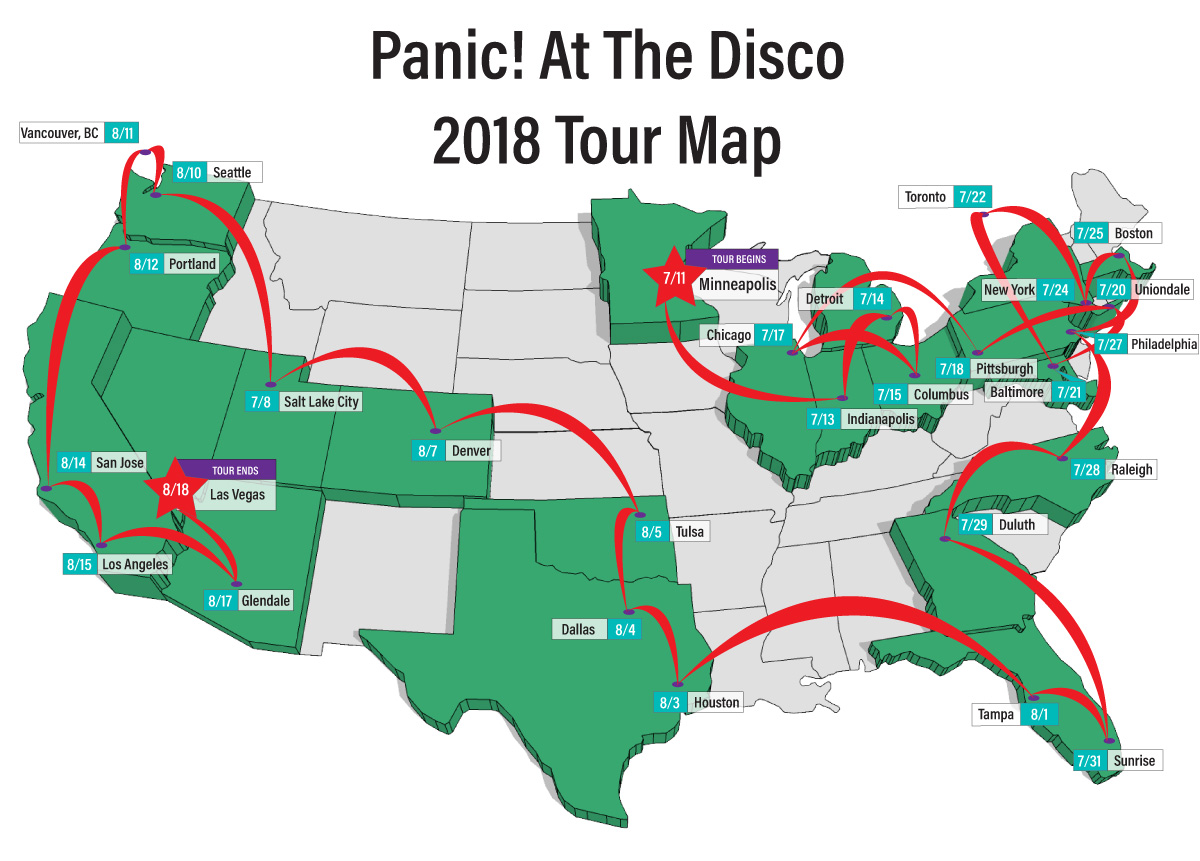 Where is Panic! At The Disco playing near me?