Update 12/19/19: The reunion tour everyone’s been buzzing about is kicking off earlier than expected!

Additional dates include stops in Kansas City, St. Louis, Minneapolis, and Nashville, as well as two back-to-back performances in Cincinnati.

Scroll down for a full list of dates and stops now.

Update 12/4/19: It’s happening! The Mötley Crüe reunion tour with Def Leppard and Poison is officially on, and it’s even bigger than predicted with Joan Jett adding her name to the lineup for 2020!

The 22-date trek gets underway July 7 in Miami, FL and will travel to a slew of cities including Houston, Philadelphia, Chicago, and Denver before wrapping up with a final performance at Los Angeles’ new SoFi Stadium on September 5.

Rumors of the mega team-up of ‘80s metal rockers began circulating several weeks ago, with Mötley Crüe officially announcing their reunion on November 18.

Find a full list of dates and stops below!

Original Article: It’s official – Mötley Crüe have confirmed they will be reuniting in 2020, kicking off a joint US tour alongside fellow hair metal rockers Poison and Def Leppard.

While dates and venues have yet to be announced, the three bands are expected to play at stadiums nationwide in the coming year.

Mötley Crüe broke the news of their reunion with a video released on Monday 11/18, featuring a voice over by Machine Gun Kelly who announced that the band is blowing up their “cessation of touring contract” thanks to high demand from loyal fans.

“I never thought I would see the day when this would become a reality,” Kelly said. “But the fans spoke and Mötley Crüe listened!” The video shows the supposed legal document bursting into flames.

Mötley Crüe last toured four years ago, playing 158 shows on their “Final Tour” and wrapping up with a final performance in their hometown of Los Angeles on December 31, 2015.

Def Leppard, on the other hand, remain of the most popular touring groups in rock ‘n’ roll. The band performed outside of the US for the better part of 2019, with the exception of their Las Vegas residency.

Poison toured with Def Leppard back in 2017, which marked their first outing since 2012. Poison also toured with Mötley Crüe back in 2011. It was the first time the two biggest bands of the hair metal era hit the road together.

Check back here for all the updates on dates and cities as they roll in!

Where are Mötley Crüe, Def Leppard, Poison, and Joan Jett playing near me?

Who are Mötley Crüe?

Mötley Crüe formed in the early 1980s, founded by bassist Nikki Sixx, drummer Tommy Lee, guitarist Mick Mars, and singer Vince Neil. The band made their mainstream breakthrough with the release of their second album Shout at the Devil in 1983, joining the first wave of glam metal with Theatre of Pain two years later. Mötley Crüe have received seven platinum or multi-platinum certifications. They have released nine Top 10 albums on the Billboard 200, including 1989’s Dr. Feelgood which hit the number one spot. Despite undergoing several short-term lineup changes throughout the 1990s and 2000s, Mötley Crüe’s original lineup remains to this day.

Who are Def Leppard?

Def Leppard emerged in the late 1970s from Sheffield, England as part of the new wave of British heavy metal movement. Def Leppard’s most successful run came between the early 1980s and early ‘90s. Their mainstream breakthrough arrived in 1983 with the release of their hit album Pyromania, spawning two mega hit singles with “Photograph” and “Rock of Ages.” The album earned a diamond certification in the US, making the group one of the most popular music acts of the time. Hysteria arrived in 1987, bringing with it another diamond certification and continued chart-topping success thanks to mega hits like “Pour Some Sugar On Me” and “Love Bites.” Def Leppard have sold more than 100 million records worldwide, making them one of the best-selling music artists in the world. They have been Rock and Roll Hall of Fame inductees since 2019.

Poison stepped into the spotlight in the mid-1980s, making their mainstream breakthrough with the release of their multi-platinum debut album Look What the Cat Dragged In in 1986. Open Up and Say… Ahh! followed, receiving 5x platinum certification in the US, with Flesh & Blood marking their third consecutive multi-platinum album in 1990. Poison have released a total of seven studio albums, four live albums, five compilation albums, and 28 singles to radio since making their debut. They have sold over 45 million records worldwide. 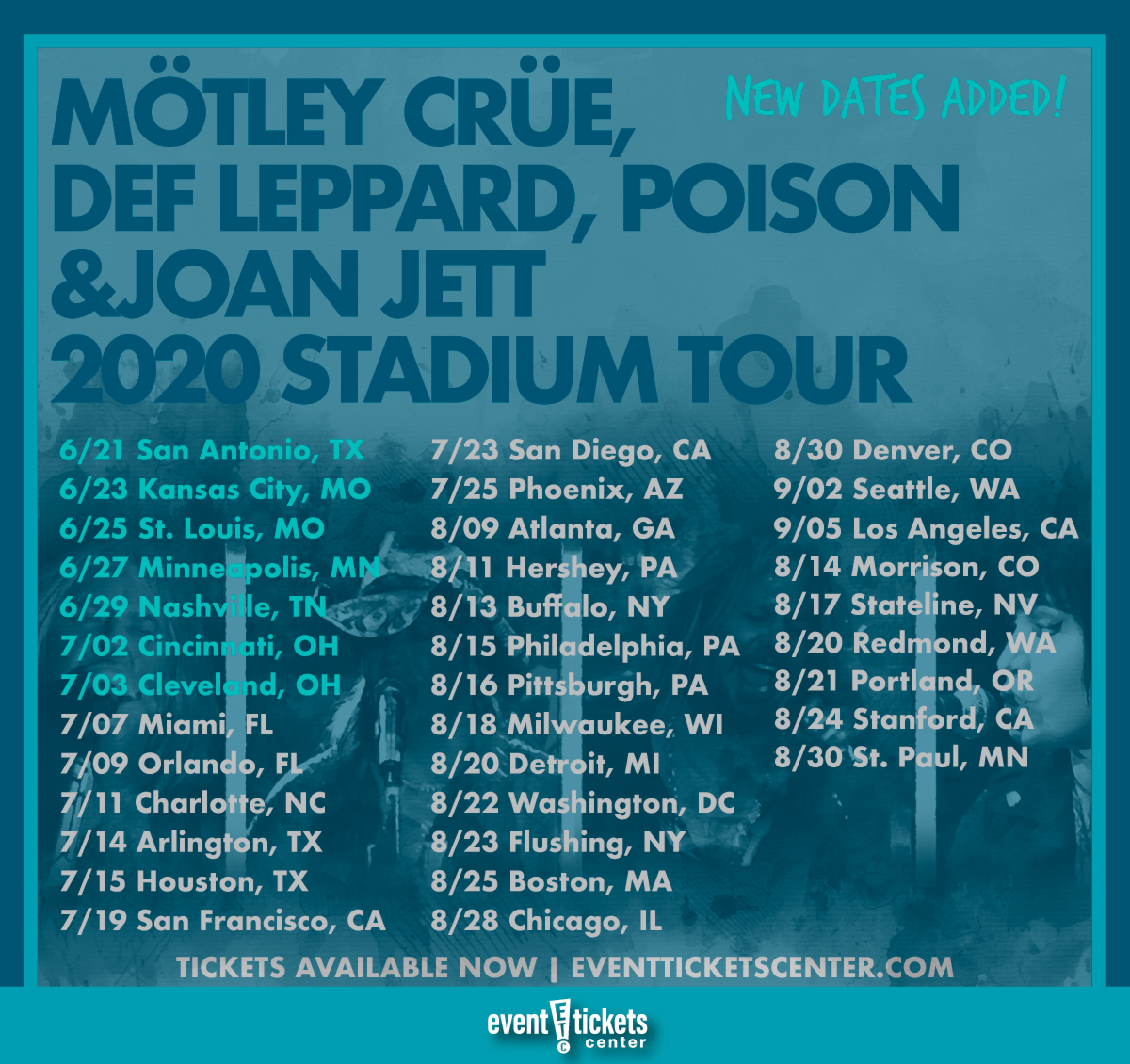