Ministry to Embark on US Tour

Following a series of shows in Europe and North America, Ministry will continue to support their critically acclaimed 2018 album with a full US tour this winter.

The 22-date trek gets underway November 21 with a show at The Warfield in San Francisco, CA. From there, the industrial metal rockers will travel coast-to-coast hitting cities like Minneapolis, Memphis, Asheville, Houston and Tempe. A two-night stint at The Fonda in Los Angeles, CA will wrap things up on December 20-21.

News of the upcoming tour was accompanied by an all-new, mind-bending visualizer set to the title-track of their latest album, which dropped in March 2018. The release marks their fourteenth studio album, and their first since 2013’s From Beer to Eternity. It also marks the group’s first project without longtime guitarist Mike Scaccia, who died in 2012.

“There was a lot of different emotions to tap into,” front man Al Jourgensen said in a recent interview, sharing how the guitarist’s death and major life events set the tone for their 2018 release.

“We got some real rippers in there – you think you’re at a thrash concert, then the next minute you think somebody dosed your drink with some psychedelics. I mean there’s no time in between songs; all the songs talk to each other. It’s kind of like telling a narrative or story the whole way through.”

Ministry will be joined on the road by supporting act and French synth-wave artist Carpenter Brut.

Ministry was originally formed as a synth-pop group by front man Al Jourgensen in 1981. The group shifted its style shortly after their formation, becoming pioneers of the industrial metal genre from the mid to late 1980s. Ministry found mainstream success from the late 1980s to early 1990s with the release of gold certified The Land of Rape and Honey (1988) platinum certified The Mind is a Terrible Thing to Taste (1989), and platinum certified Psalm 69: The Way to Succeed and the Way to Suck Eggs (1992). The band has been nominated for a total of six Grammy Awards over the course of their career. They disbanded in 2008 following nearly three decades of continual writing and recording, reuniting in 2011 to release three more studio albums. 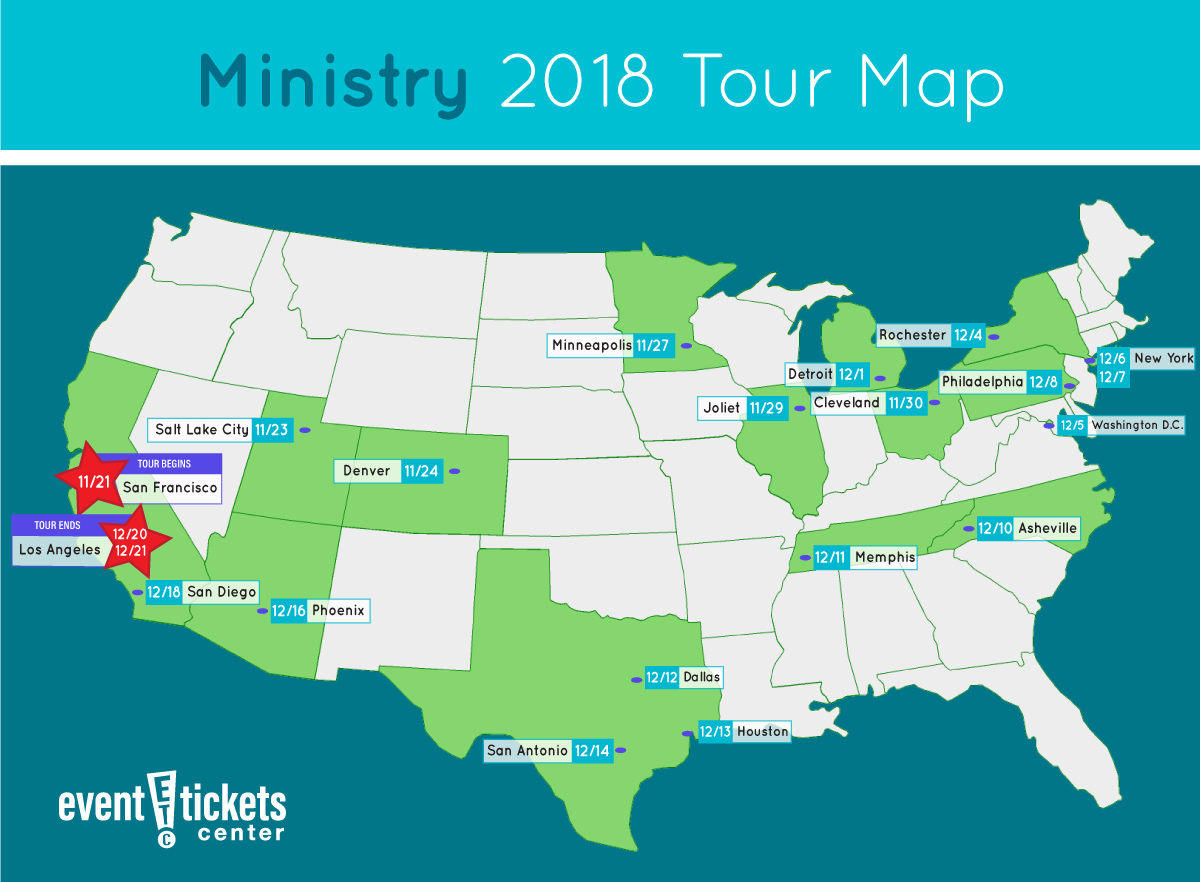 Where is Ministry playing near me?