Indie rock bands Manchester Orchestra and The Front Bottoms are bringing the music to a city near you with a highly anticipated joint tour come this winter 2018!

The 20-date trek will take the two groups across the eastern and midwestern United States, kicking off on November 21 with Manchester Orchestra’s annual Thanksgiving event— fittingly dubbed ‘The Stuffing’— in their origin city of Atlanta. The partnership will then make stops in several cities, such as Raleigh, Houston, Madison, and Rochester. The tour also includes a stop at The Front Bottoms’ year-end blowout Champagne Jam on December 16 (location to be announced) and will wrap up on December 18 in Lowell, Massachusetts.

Manchester Orchestra issued their fifth EP, A Black Mile to the Surface, last year and is scheduled to make appearances at festivals like Austin City Limits and Cal Jam. The Front Bottoms released their sixth album, Going Grey, in October 2017 and followed it up with their Ann EP in May of this year. Fans can expect to hear old favorites and singles off their latest works.

Who Is Manchester Orchestra?

The first album by Manchester Orchestra was titled Nobody Sings Anymore, and never saw the light of day due to a shift in the band’s musical direction. However, some of the tracks off the album were released on You Brainstorm, I Brainstorm, but Brilliance Needs a Good Editor. The EP was released in 2005 but the pressed vinyl wasn’t made available for purchase until November 23, 2016 (the night of their annual "The Stuffing" Thanksgiving event).

Following the EP, Manchester Orchestra released their debut album I'm Like a Virgin Losing a Child in 2007. This album gained the attention of the music industry, and eventually led to a record deal. The band continued building momentum with the release of their second EP, Let My Pride Be What's Left Behind, the following year.

In 2013, the band's original bassist, Jonathan Corley, parted ways with the group. Keyboardist/percussionist Chris Freeman announced his departure from the band in September 2016.

Aside from I’m Like a Virgin Losing a Child, Manchester Orchestra has four more studio albums to its name: Mean Everything to Nothing (2009), Simple Math (2011), Cope (2014) (as well as its accompanying acoustic version, Hope) and A Black Mile to the Surface (2017).

Who Are The Front Bottoms?

The Front Bottoms has roots in New Jersey when members Brian Sella (vocals, guitar) and Mat Uychich (drums) came together in 2007. Sella had finished his first year of college, and he and childhood friend Mathew Uychich began playing together under the name The Front Bottoms. Soon after, Uychich's brother Brian Uychich (keyboard, vocals) began sitting in on their practices. Brian asked to join the band, playing an old keyboard he found in the Uychich family attic. This completed the original lineup, with which the first two albums and EP were recorded.

The Front Bottoms spent the next few years playing locally around New Jersey and eventually doing extensive tours around the country. During this time, they put out a self-released album titled I Hate My Friends in 2008, an EP titled Brothers Can't Be Friends the same year, and a second album in 2009 called My Grandma vs Pneumonia.

In 2010, Brian Uychich left the band to concentrate on school full-time. The band released their self-titled debut in 2011, followed by their second studio album, Talon of the Hawk, in 2013. The Front Bottoms released two more albums, Back on Top (2015) and Going Grey (2017). They performed at several festivals in 2016, including Coachella, Austin City Limits, Panorama, and Shaky Knees, indicating their rise in popularity. 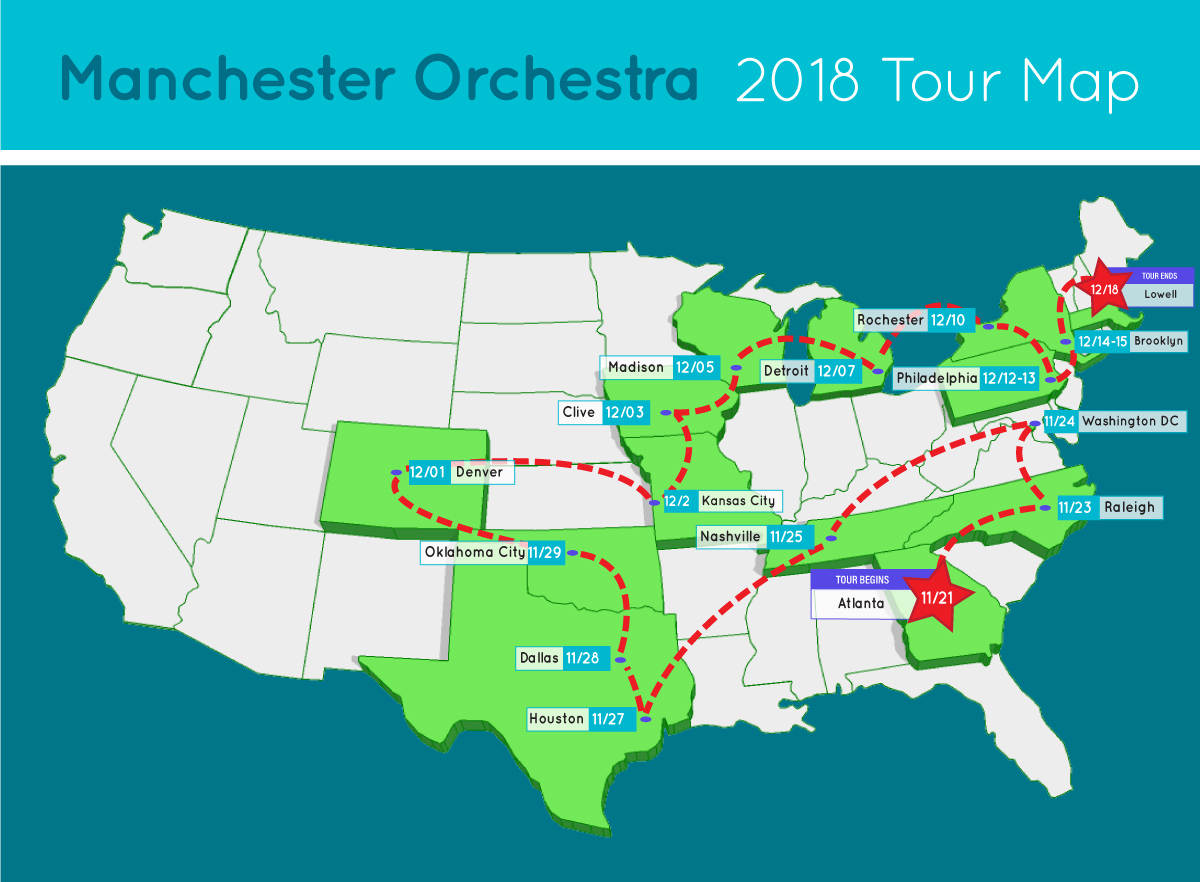 Where are Manchester Orchestra and The Front Bottoms playing near me?