And no, we don’t mean the psychedelic. Three of country music’s biggest names, Lucinda Williams, Steve Earle, and Dwight Yoakam are tripping across North America this summer. Dubbed the "LSD Tour", a clever play on their first names, the 18-city trek will feature special guest King Leg as the alternative/indie opener.

The tour kicks off in Boston on June 12, with stops in Cincinnati, San Francisco, and Nashville before wrapping in Indianapolis on August 8.

This marks the first time the three music legends will perform together, giving fans the opportunity to experience their excellent songwriting and award-winning talents live under one roof.

“LSD Tour” is the trio’s effort to promote their most recent musical endeavors.

Yoakam is set to launch his own SiriusXM channel in April, called “Dwight Yoakam and The Bakersfield Beat.” The station will aim to explore the rock n’ roll country sounds of Bakersfield, CA that became signature to Yoakam’s music. Williams is promoting the release of the 25th Anniversary edition of her acclaimed 1992 album Sweet Old World. Steve Earle is celebrating the 30th anniversary of his largely influential 1989 country-rock album, Copperhead Road.

Who is Lucinda Williams?

The legendary Lucinda Williams made a splash in the country music scene with her 1988 self-titled album, which featured the Grammy Award-winning song “Passionate Kisses.” Her biggest commercial success came with the 1998 release of Car Wheels on a Gravel Road, which had a distinct style infusing blues, rock, and country. Williams has released several albums since then, winning three Grammy Awards, and two Americana Awards. She was named “America’s Best Songwriter” by Time magazine in 2002.

Who is Steve Earle?

Steve Earle began his career as a songwriter in Nashville in 1982. His big break came in 1986 with the release of his album Guitar Town. Since then, Earle has released 15 other studio albums, earning three Grammy Awards in the process.

Who is Dwight Yoakam?

Critically-acclaimed Dwight Yoakam is known for his pioneering style of country music and has recorded over twenty albums, selling more than 25 million records throughout his lengthy career. Yoakam holds five Billboard number one albums to his name, along with twelve gold albums, and nine platinum albums. 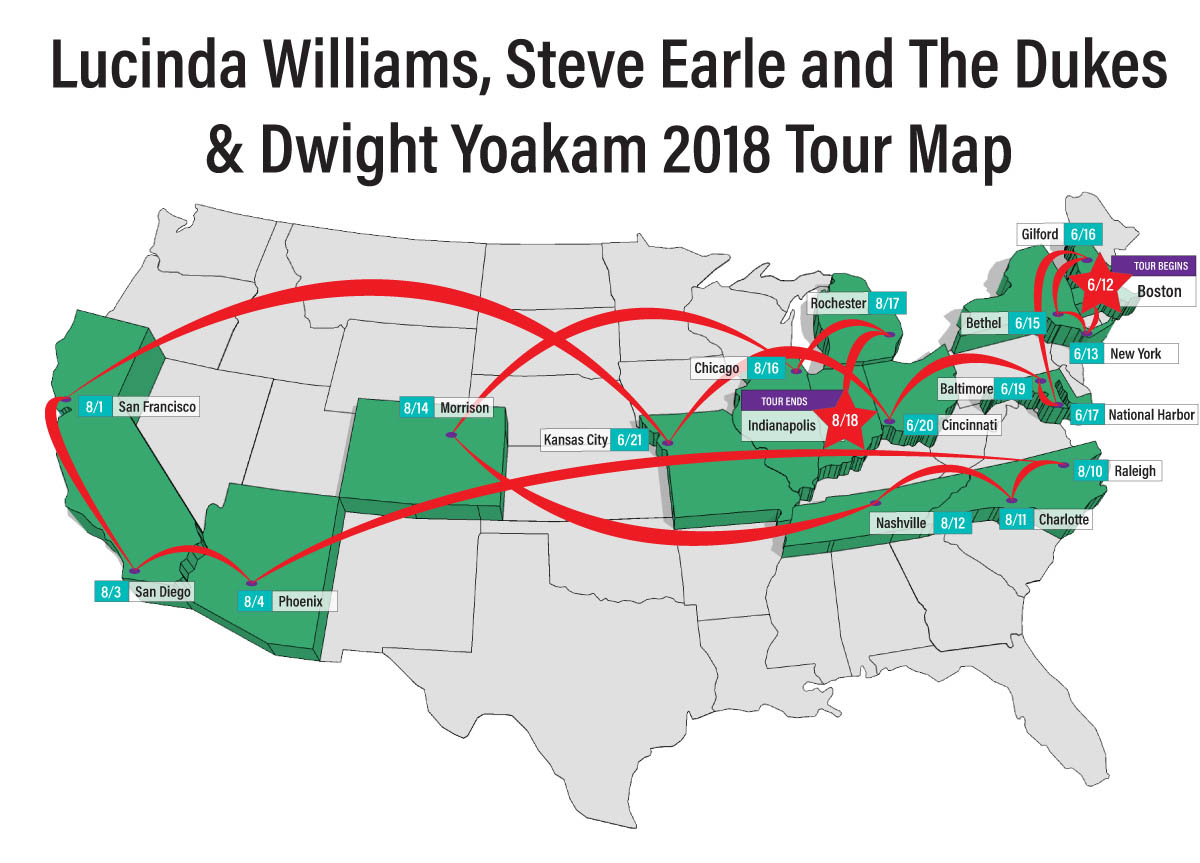 Where are Lucinda Williams, Steve Earle, and Dwight Yoakam bringing the "LSD Tour" near me?