Lenny Kravitz has announced an all new U.S. tour set to take him coast-to-coast this fall!

The Grammy Award-winning rocker will kick off the 8-night trek on September 21 with a show in Atlanta. From there, he will play cities including Louisville, New York, and San Francisco, closing with a final performance in Los Angeles on October 8.

The tour is in support of his highly anticipated 11th album Raise Vibration, scheduled for release on September 7, 2018.

Who Is Lenny Kravitz?

Lenny Kravitz knew he wanted to be a musician from the young age of five years old. He grew up surrounded by music, guided by his parents as they listened to R&B, jazz, classical, blues, gospel and opera. His mother encouraged him to join the California Boys Choir after the family moved from New York to Los Angeles in 1974. Kravitz sang with the choir for three years, where he performed with the Metropolitan Opera. It was during his time in LA that he discovered rock and roll. He was instantly drawn to the music and lifestyle that came along with it.

Kravitz recorded his debut album independently. Let Love Rule was released in 1989 and featured a sound that combined rock and funk music with a 1960s vibe. The album was a moderate success in the U.S. but became an instant hit outside of the U.S., especially in Europe. He went on to tour, having to arrange a band rather quickly as he had played most of the instruments on the album. In 1990, he produced Madonna’s song “Justify My Love,” which went to the number one spot for two consecutive weeks. He released his second album, Mama Said, in 1991. Mama Said was his first album to reach the Top 40 and produced the hit single “It Ain’t Over ‘til It’s Over,” which reached the number two spot on the Billboard Hot 100.

Kravtiz’s third album, Are You Gonna Go My Way, dropped in 1993 and reached number 12 on the Billboard 200. He went on to release Circus (1995) and 5 (1998), the latter of which he embraced digital technology like Pro Tools and samplers for the first time. 5 widened his fanbase due largely in part to the hit single “Fly Away,” which was prominently featured in both car and airline commercials. The song earned him his first Grammy Award for Best Male Rock Vocal Performance. Kravitz earned his second Grammy award for his cover version of The Guess Who's hit “American Woman” in 2000.

His Greatest Hits album was released in 2000 and reached the number two spot on the Billboard 200. The album featured one new song, “Again,” which earned him his third consecutive Grammy for Best Male Rock Vocal Performance. His sixth album, Lenny, was released in 2001 and earned him yet another Grammy award.

Baptism, his seventh album, dropped in May 2004. The album produced several hit songs including “Lady” which propelled Baptism to gold status. Following a few years of touring, he made his acting debut in the feature film Precious in 2009. He went on to play the part of Katniss Everdeen’s creative stylist Cinna in the first two Hunger Games films in 2012 and 2013. Kravitz performed alongside pop star Katy Perry at the Super Bowl XLIX halftime show in 2015. Later that year, he dove into furniture designing and launched a collection of furniture products.

His upcoming album, Raise Vibration, will be released in September 2018. In an interview with Rolling Stone, Kravitz confirmed he has already begun work on a follow-up to his upcoming album as a possible soundtrack to a future film project. 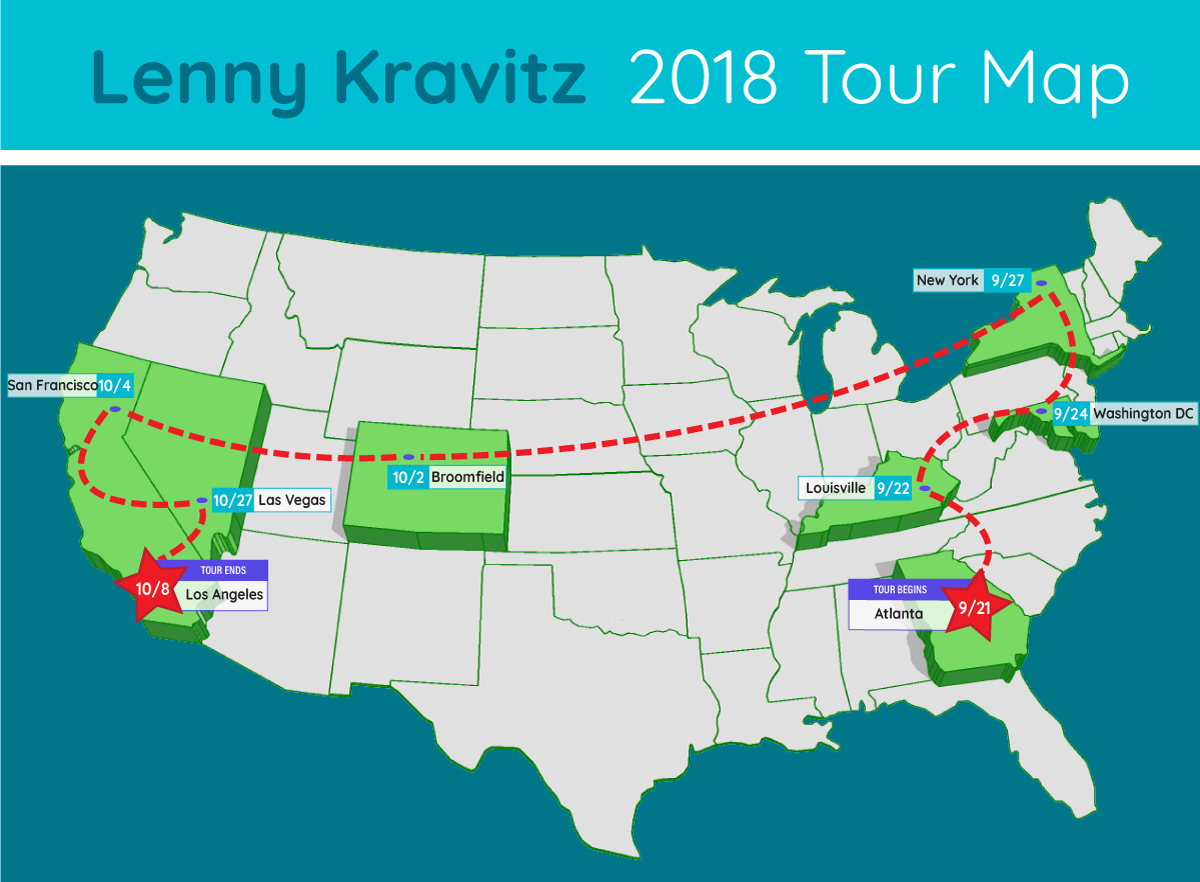 Where is Lenny Kravitz playing near me?