Country music’s Kip Moore is looking ahead to the cooler months with the announcement of his fall 2018 "After the Sunburn" tour!

The 21-date trek will commence with a September 20th performance in Silver Spring, Maryland. From there Moore will journey from coast-to-coast, hitting cities like New York, Madison, Salt Lake City and Los Angeles before making a quick turnaround for a final hometown show in Nashville, Tennessee on November 17.

“Anyone who knows me, knows that the live show means everything to us,” said Moore. “It’s where we get to thank our die-hard fans that show up to every show year after year, and it’s also where we get to lay all of our cards out on the table and win over new fans. I’m excited to get out to some cities we haven’t played a full show at in a while and with all the awesome acts we have joining us, it’s going to be a hell of a fall!”

September dates for the "After the Sunburn" tour will feature a combination of country artists including The Wild Feathers, Caroline Jones and Jillian Jacqueline as supporting acts. Jacqueline and Jordan Davis will go on to open shows for the remainder of the tour beginning in October.

Who Is Kip Moore?

Kip Christian Moore began playing guitar while attending college, making his first public performance at a Mellow Mushroom restaurant in Valdosta, Georgia. Following his graduation, he moved to Hawaii on a whim and took up backpacking and surfing for some time. While there, his friend encouraged him to follow his dreams and pursue a career in music. After only six months in Hawaii, Moore hit the road once more when he moved to Nashville, Tennessee, signing a publishing deal with the help of songwriter and producer Brett James.

Moore spent eight years in Nashville before releasing his debut single, “Mary Was the Marrying Kind” in 2011. The song peaked at the number 45 spot on the country singles chart. He released his debut studio album, Up All Night, in April 2012. One month after hitting the shelves, the album’s debut single “Somethin’ ‘Bout a Truck” hit the number one spot on the Billboard country charts, with following released singles “Beer Money” and “Hey Pretty Girl” both charting within the country Top 5.

In October 2013, he released two singles from his upcoming second album, “Young Love” and “Dirt Road.” Both songs were met with mixed reviews, with the latter failing to make the Top 40. It was then that Moore decided to scrap his second album entirely and compose all new material. He released “I’m to Blame” on February 2015, the lead single to his 2015 album, Wild Ones. The album received positive reviews, going on to reach number 5 on The 10 Best Country Albums of 2015 list by Entertainment Weekly, and snagging the number 6 spot on Rolling Stone’s 40 Best Country Albums of 2015 list. 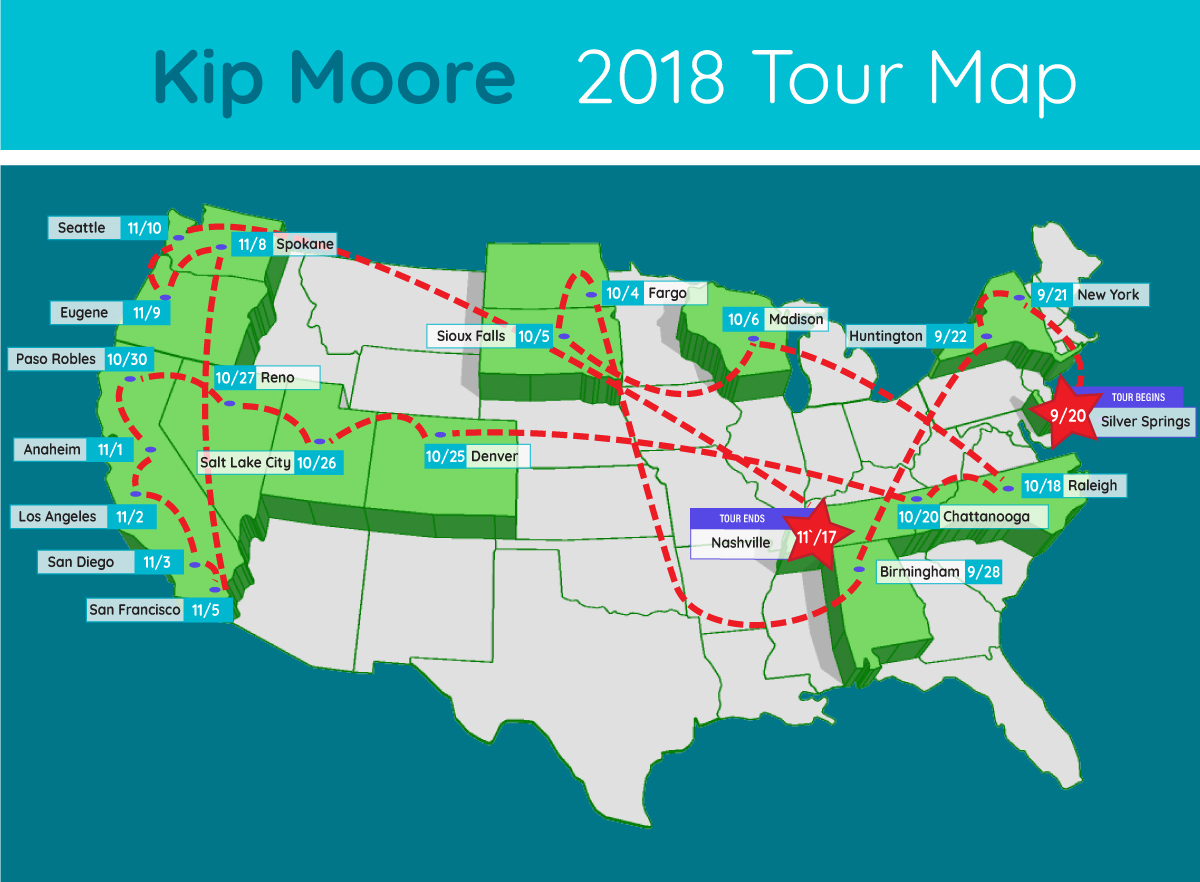 Where is Kip Moore playing near me?