5/4/19: An earlier version of this story listed Louisville, KY as one of the stops on tour for September 8. A check of several resources confirms that the September 8 show will be taking place in Grand Rapids, MI.

UPDATE 5/14/2019: The JoBros have extended their “Happiness Begins Tour,” adding 23 new stops across North America - including a show in their home state of New Jersey!

The trio initially announced a 40-date trek set to run from August 7 to October 21 on May 1. Due to popular demand, that number has jumped to a massive 63 stops, with extended shows set to kick off October 28 in Monterrey, Mexico.

After three shows south of the border, the brothers will return stateside to hit new cities including New Orleans, Charlotte, Atlantic City, and Dallas, wrapping up with a third appearance in Los Angeles on December 14.

Scroll down to see all the extended dates!

Original Article: You read that right - the Jonas Brothers are officially back in action and ready to hit the road on the all-new “Happiness Begins Tour,” coming to a stage near you this summer!

Exactly two months after the release of their highly anticipated comeback album, Joe, Kevin, and Nick will kick-off the massive 40-date “Happiness Begins” arena tour August 7 in Miami, FL. From there, the trio will set out to hit a slew of cities across the US, making stops in Philadelphia, Nashville, Chicago, Dallas, and Denver before wrapping things up with a final performance in Los Angeles on October 20.

The tour will also include a performance at NYC's Madison Square Garden on August 29, marking the trio’s first MSG show since a three-day stint back in 2008.

“We’re so excited to announce this tour and get in front of our fans again," the brothers shared in a statement. "We can’t wait for everyone to see what we have planned!”

Chart-topping singer/songwriter Bebe Rexha and rising star Jordan McGraw will serve as opening acts for the JoBros throughout the entirety of the tour.

Along with the tour announcement, the brothers also launched their official merchandise store and the pre-order for the fifth album, Happiness Begins, which is due for release June 7.

Where are the Jonas Brothers playing near me?

Who Are the Jonas Brothers?

Sibling trio the Jonas Brothers burst onto the scene in 2006, gaining massive exposure through several appearances on the Disney Channel. Made up of brothers Kevin, Joe, and Nick, the JoBros released their debut album It’s About Time in 2006, going on to star in the hit Disney Channel Original Movie Camp Rock in 2008 and it’s equally-successful sequel Camp Rock 2: The Final Jam two years later. Together, the brothers would go on to release three additional studio albums including Jonas Brothers (2007), A Little Bit Longer (2008), and Lines Vines and Tying Times (2009) before entering a two-year hiatus to pursue solo projects. After briefly reuniting in 2012, they split amicably again one year later, entering what would be a six-year hiatus. In 2019, the JoBros made their triumphant return to the charts with the release of their first new single since parting ways in 2013. “Sucker” shot to the top of the charts, becoming the 34th song in history to debut at number one on the Billboard Hot 100 and simultaneously becoming the brothers’ first number one single. Their fifth studio album, Happiness Begins, is due for release in June 2019. 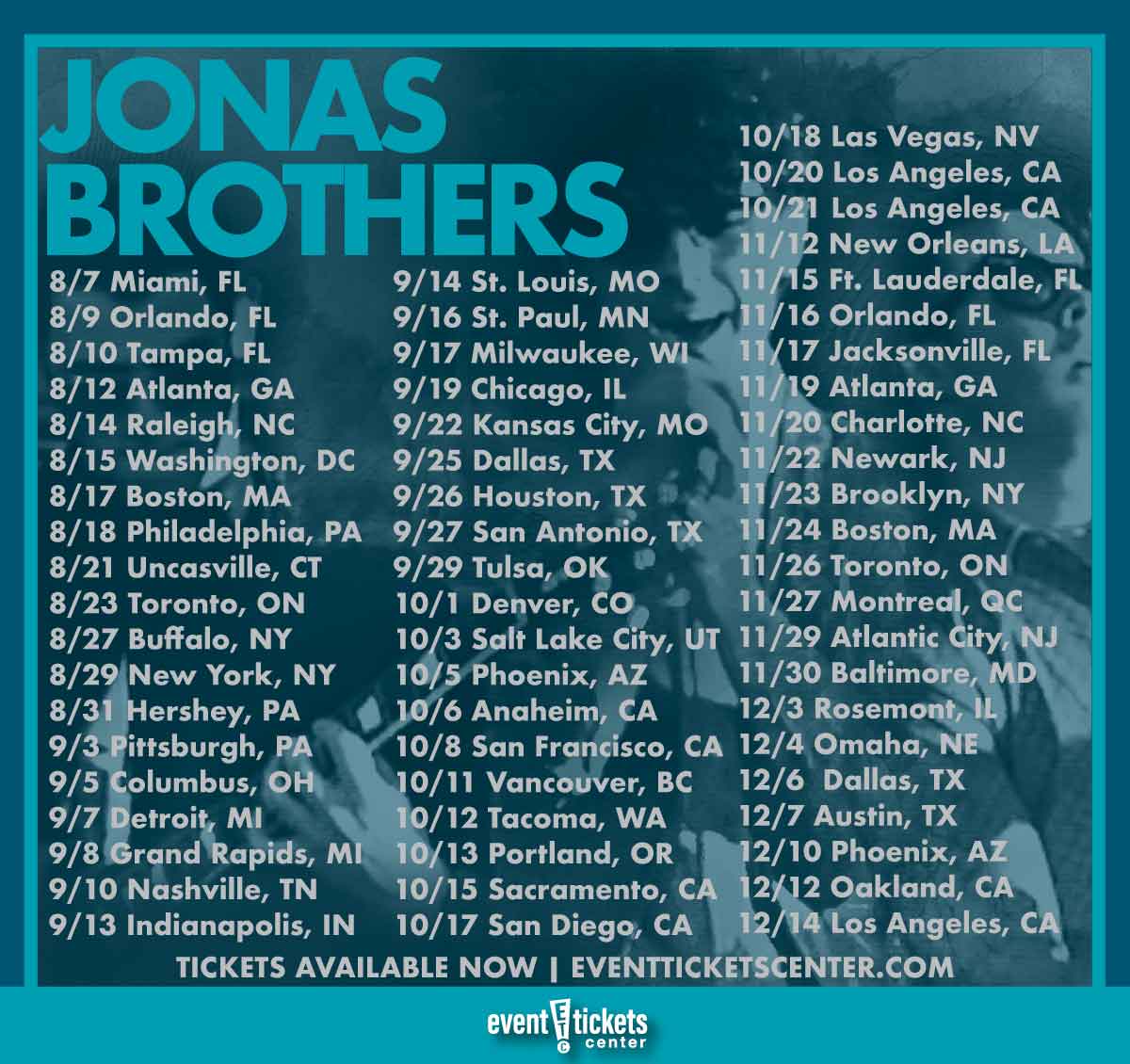 In This Article: Jonas Brothers
Tickets By Category